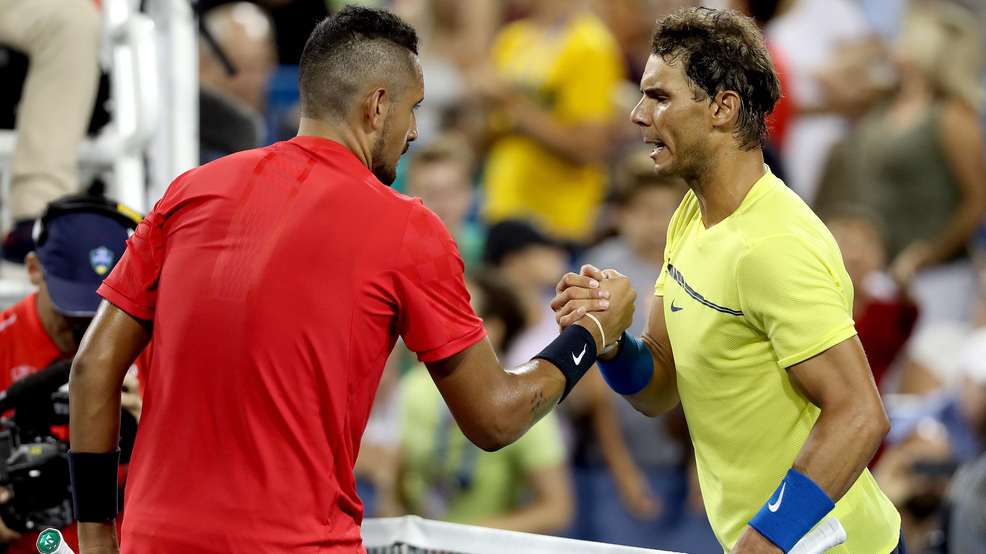 MASON, OH - AUGUST 18: Nick Kyrgios of Australia is congratulated by Rafael Nadal of Spain after their match during day 7 of the Western & Southern Open at the Lindner Family Tennis Center on August 18, 2017 in Mason, Ohio. (Photo by Matthew Stockman/Getty Images)

Nadal vs Kyrgios: 10 Things to Know

Rafael Nadal and Nick Kyrgios came through blockbuster semifinal clashes on Saturday - Nadal over Grigor Dimitrov, Kyrgios over Alexander Zverev - to set up an all-star final at the China Open.

Here are 10 Things To Know about Nadal and Kyrgios’ championship clash in the Chinese capital:

1. They’re a dead even 2-2 in their head-to-head. But Kyrgios won their only previous meeting on hardcourts, right before the US Open in the quarterfinals of Cincinnati. Here’s how that went down:

3. Kyrgios is going for the equal-biggest title of his career. He’s won one ATP World Tour 500-level title before, at Tokyo last year - in fact if he wins in Beijing he’ll become just the fourth player to have completed the 500-level Tokyo-Beijing double, after Nadal, Andy Murray and Tomas Berdych.

4. Nadal was nearly out in the first round this week. Nadal faced double match point down 6-4 in the second set tie-break against Lucas Pouille, but he won four points in a row to sneak out the second set then squeaked out a late break en route to a 4-6 7-6(6) 7-5 win. Here are the highlights:

5. But since then, Nadal’s also become the first player to 60 wins this year. Like he’s done time and time again this year, Nadal battled his way to victory against Pouille, and his semifinal win over Dimitrov was his 60th match win of the year. He’s nine wins ahead of next-most, Zverev, who has 51.

6. Nadal’s also going for a tour-leading sixth title of the year. The World No.1 has won five ATP World Tour titles this year at Monte Carlo, Barcelona, Madrid, Roland Garros and the US Open, which ties him with Federer and Zverev for most titles so far this year. Will he take the lead in Beijing?

7. Kyrgios has beaten a World No.1 before. And it was Nadal in the fourth round of Wimbledon in 2014 - just 19 at the time, Kyrgios became the first teenager to beat a World No.1 at a major since the semifinals of the French Open in 2005 (when a 19-year-old Nadal beat then-World No.1 Federer).

9. Nadal’s trying to win his third career title in China. The Spaniard has won two titles in China, both in Beijing, at this event in 2005 and the Olympics in 2008. Here’s a refresher on that 2005 title: