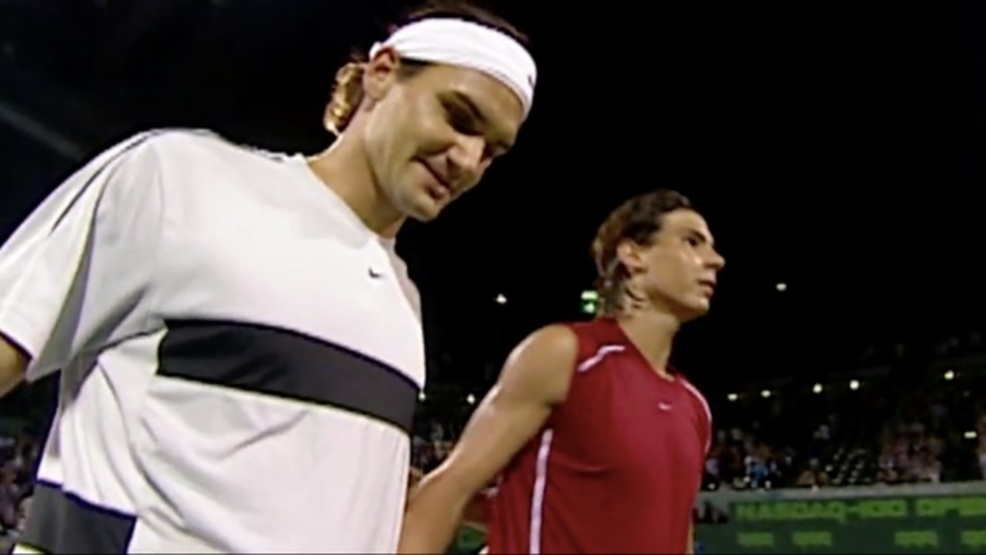 On This Day in 2004, Roger Federer & Rafael Nadal Kicked off a Rivalry

It was on March 28, 2004—14 years ago to the day—when two of the greatest players in tennis history played each other for the first time, as Roger Federer and Rafael Nadal squared off in Miami.

Going in, it seemed like a routine third-round match for Federer. The 22-year-old Swiss was already a two-time Grand Slam champion and the new world No. 1; Nadal, just 17 years old at the time, was ranked No. 34 and had never even won an ATP tour title.

But in a sign of things to come, Nadal gave Federer all kinds of trouble, drawing 20 unforced errors (15 off the forehand side) and breaking serve three times for a stunning, 6-3, 6-3 victory.

It goes without saying that Federer and Nadal have put together a historic rivalry since that day.

~ They’ve played each other a total of 38 times. Nadal has 23 wins to Federer’s 15, but the Swiss has managed to close the gap somewhat over the last few years, winning their last five meetings: at Basel in 2015, and at the Australian Open, Indian Wells, Miami and Shanghai last year.

It’s actually the third-most encounters for any two men in the Open era, after Federer and Nadal’s respective rivalries with Novak Djokovic (the Serb has played Nadal 50 times, and Federer 45 times).

The Miami match between Federer and Nadal 14 years ago was also an early look at two men who would eventually become two of the most accomplished tennis players of all time:

They’re showing no signs of slowing down at the majors, either—they’ve won the last five in a row.

They’re still going strong in that sense, too. Between them, they’ve held No. 1 for the last 32 weeks, and though Federer will lose his No.1 ranking next Monday, it’s Nadal who will take over again.

Beyond all the numbers and stats, though, Federer and Nadal have been two of the main players in an absolute golden era of men’s tennis with a rivalry that started on this day 14 years ago.