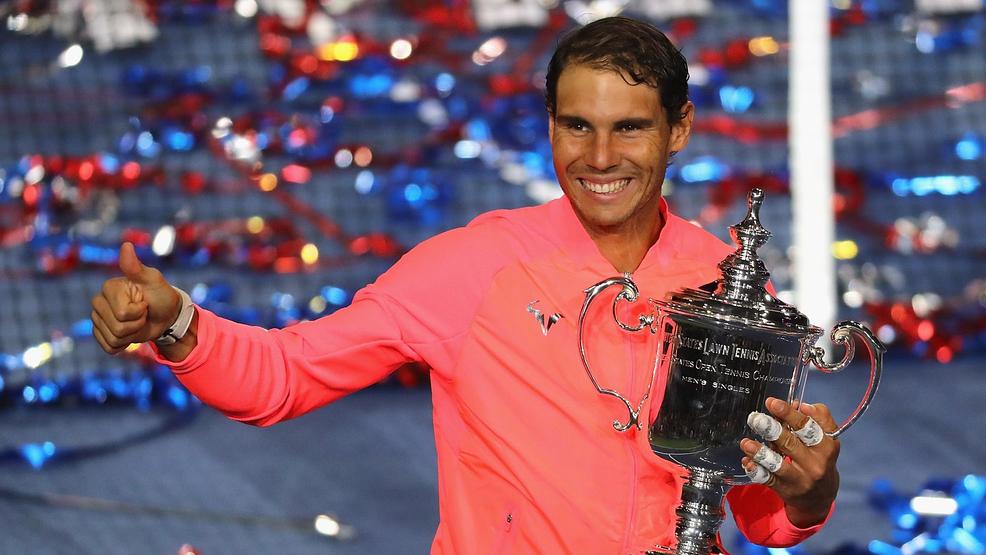 NEW YORK, NY - SEPTEMBER 10: Rafael Nadal of Spain poses with the championship trophy during the trophy ceremony after he defeated Kevin Anderson of South Africa in the Men's Singles Finals match on Day Fourteen of the 2017 US Open at the USTA Billie Jean King National Tennis Center on September 10, 2017 in the Flushing neighborhood of the Queens borough of New York City. Rafael Nadal defeated Kevin Anderson in the third set with a score of 6-3, 6-3, 6-4. (Photo by Abbie Parr/Getty Images)

NEW YORK, NY, USA - Rafael Nadal’s career was already legendary, but it got just a little bit more legendary after he won the 2017 US Open. Here are 16 things he achieved with his latest win:

2. He won his 16th Grand Slam title. Probably the biggest number - Nadal is in second place all-time for most Grand Slam titles, with Federer in first place (19) and Sampras in third place (14).

3. He won his first major outside of Roland Garros in four years. Nadal’s won a lot of French Opens, A LOT - he got his 10th this year - but his last major elsewhere had been the 2013 US Open.

4. He won his first hardcourt title in more than three and a half years. Nadal’s last hardcourt trophy had come in Doha, Qatar in January 2014 - which was all of 34 hardcourt tournaments ago.

5. He improved to 5-0 against Anderson. While one of their meetings could have gone Anderson’s way - the South African held match point in Paris in 2015 - the other four have all been straight sets.

8. He hung onto No.1. Going into the tournament, Federer had a shot at returning to No.1 - but by losing to del Potro in the quarterfinals, Federer’s chance was gone, at least for this tournament

16. He’s within three majors of Federer’s record again. For much of 2017 it looked like Federer might start increasing his lead in most career majors - but we’ll finish the year right where we started in terms of the gap, Federer starting three ahead (17 to 14) and finishing three ahead (19 to 16).

As for the actual tennis, here’s a little taste of how Nadal achieved all of those numbers