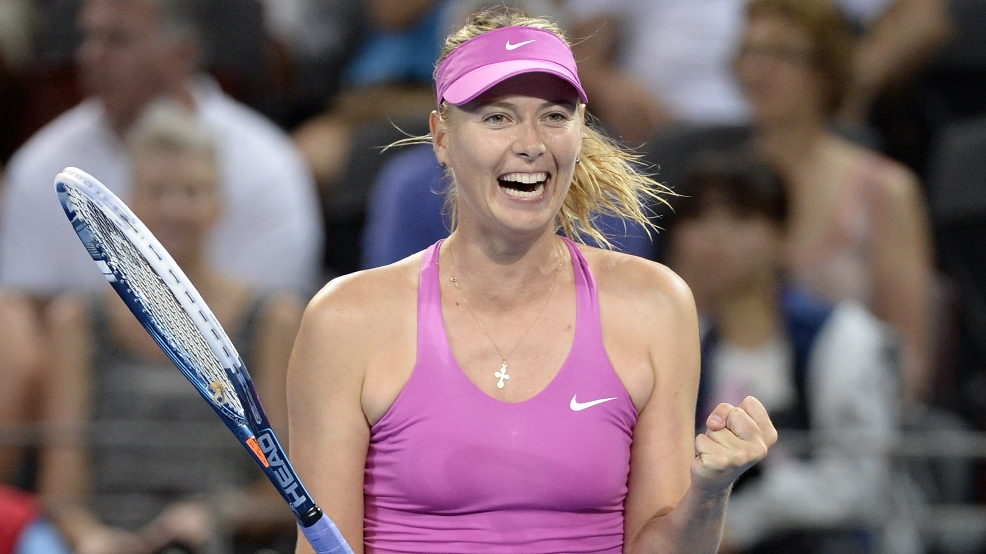 BRISBANE, AUSTRALIA - DECEMBER 30: Maria Sharapova of Russia celebrates victory after winning her match against Caroline Garcia of France during day two of the 2014 Brisbane International at Queensland Tennis Centre on December 30, 2013 in Brisbane, Australia. (Photo by Bradley Kanaris/Getty Images)

The eyes of the tennis world will be on the Porsche Tennis Grand Prix in Stuttgart this week as Maria Sharapova makes her long-awaited return to the court following a banned substance suspension.

Here are 10 Things To Know about the first match of Sharapova’s comeback against Roberta Vinci:

1. Sharapova’s playing for the first time in 457 days. The last match she played, a quarterfinal loss to Serena Williams at the 2016 Australian Open, took place on Monday, January 25, 2016. Her comeback match against Vinci will take place exactly 457 days later on Wednesday, April 26, 2017.

2. Sharapova’s playing her first match as a 30-something. She turned 30 last week, and the 30-somethings are going strong - all four Australian Open finalists, Roger Federer, Rafael Nadal and the Williams sisters, are in their 30s, with Andy Murray and Novak Djokovic about to join the club too.

3. Vinci is no routine first round opponent. Quite the opposite, actually - she’s ranked No.36 now but she’s a former Top 10 player, going as high as No.7 in the world last year, she’s been to a Grand Slam final, doing that at the 2015 US Open, and she’s had 15 career wins over Top 10 players.

5. But Vinci’s not scared of players who’ve been No.1. The Italian has wins over five players who were, had been or would become No.1 - Serena Williams, Angelique Kerber, Caroline Wozniacki, Ana Ivanovic and Jelena Jankovic. She also beat Serena and Wozniacki when they were actually No.1.

6. Sharapova’s used to quick comebacks. This has been her longest absence from the tour in her career, but right after her second-longest absence - a nine-month shoulder injury lay-off from August 2008 to May 2009 - the Russian reached back-to-back quarterfinals at Warsaw and Roland Garros.

9. Sharapova and Vinci will kick off the night session on Wednesday. The match starts “not before” 6:30pm Stuttgart time, which is 12:30pm Eastern Time and 9:30am Pacific Time.

10. The winner will play Ekaterina Makarova. Makarova upset No.7 seed Agnieszka Radwanska on Tuesday, 6-2 6-4. Makarova is 4-3 against Vinci but 0-6 against her countrywoman Sharapova.