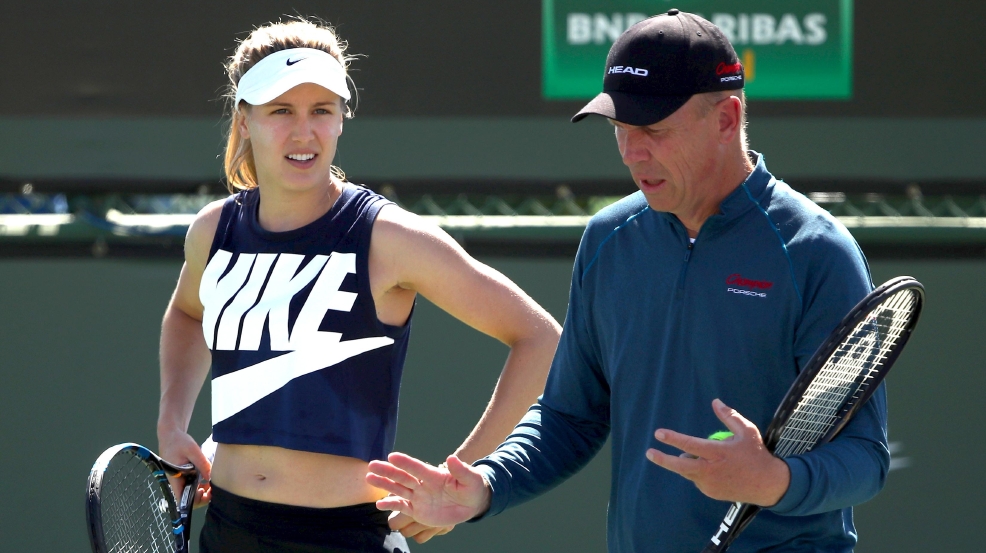 Steinberger: Coaching Gigs are Short-Lived and Often Dissolve in Acrimony

It wouldn’t be entirely accurate to say that coaching tennis at the professional level is a thankless job. The perks are pretty good: you get to travel the world, meet interesting people, and maintain a year-round tan. It definitely beats pouring cement. But it is a job with limited upside. The best you can hope for is to get a little credit for any success that your player enjoys and the opportunity to bask in whatever glory he or she might achieve. And no matter how well a player does under your guidance, you are always one ugly loss away from unemployment. More often than not, coaching gigs are short-lived and dissolve in acrimony. If you happened to witness the on-court flap in Miami last month between Garbine Muguruza and her coach Sam Sumyk, or the painful discussion between Simona Halep and her coach Darren Cahill, you got to see first-hand just how tenuous the whole thing is.

So what does it take to survive and flourish in this line of work? Thomas Hogstedt has arguably the most impressive coaching resume in the business. His clients have included Maria Sharapova, Li Na, Tommy Haas, Madison Keys, and Genie Bouchard. The Swede’s ubiquity is such that you might even call him the Zelig of the professional tennis tour. I caught up with Hogstedt a few weeks ago at Indian Wells to talk about coaching and the evolution of the game. (The interview was arranged by his brother Johan, who lives nears me and occasionally hits with the guy who coaches my daughter. Johan played tennis at the University of Utah and was briefly a pro. When I asked him for help connecting with his brother, I also used the opportunity to try to recruit him for my USTA team—we could use another 5.0. Alas, he’s in almost as much demand as his brother and was already committed.)

I met up with Hogstedt in the players’ lounge at Indian Wells. He had just come from an early morning hit with Haas, who was attempting another comeback at the age of 38 (the German, once ranked second in the world, has been plagued by injuries throughout his career) and who also several days into his new job as the tournament’s director. A tall, trim 54-year-old, Hogstedt has an easy smile and a tranquil demeanor, which surely goes some way to explaining his success as a coach. He was in California with Genie Bouchard, four months into his second go-round with the Canadian. He coached her from TK through March of last year, when the two split and she reunited with Nick Saviano. But after that relationship ended, Bouchard decided she’d made a mistake in parting with Hogstedt and made a dramatic mea culpa by surprising him as he stepped off a plane one day last November at the Tampa airport. Bouchard is a salvage project (my words, not Hogstedt’s)—in 2014, she reached the final at Wimbledon and the semis of the Australian and US Opens, was widely hailed as the next superstar of women’s tennis, and promptly went into a tailspin. Hogstedt said it was a case of too much, too soon. “Everything went like crazy: she signed a lot of things, she was all over the place, and she had to land,” he told me. He said she was now completely focused on her game—“tennis is her priority”—and expressed confidence in her prospects. “She’s hungry, and she wants to get back there,” he said.

Hogstedt is a product of the golden age of Swedish tennis, an era that yielded Bjorn Borg, Stefan Edberg, Mats Wilander, and a gaggle of other notables. He won the US Open boys tournament in 1981 then spent more than a decade on the pro tour, winning one Grand Prix event, reaching the late stages of a couple of others, and achieving a career-high ranking of 38th in the world. The limited success that he enjoyed as a player proved to be an advantage when he decided to become a coach: his results were impressive enough to give him street cred in the eyes of potential clients—38th in the world is not insignificant—but modest enough that his ego would never get in the way. He said it was “maybe a little easier” for him to make the transition to coaching than for guys who had more illustrious careers because coaching requires so much self-effacement. “As a coach, you always have to put yourself in the second spot,” he said. “What matters is the player.” He suggested that he also had one other advantage: both of his parents were schoolteachers, and from them he acquired a love of teaching.

After retiring from the tour, Hogstedt had an academy in Stockholm. As his reputation as a coach grew, he found himself being called upon to work with big-name players—Haas, for instance, as well as his compatriot Nicholas Kiefer, who was ranked as high as fourth in the world. In 2008, Hogstedt was asked to coach the rising Chinese star Li Na. He worked with her for two years, during which she broke into the top 10 for the first time and reached the semifinals of the Australian Open and the quarters of Wimbledon and the US Open. (When Li announced her retirement in 2014, she thanked Hogstedt for “introducing me to professional tennis.”) At the end of 2010, he left Li to work with Sharapova. At the time, he told me, he was also weighing an offer from a top male player (he wouldn’t give the name). He said his two daughters made the decision for him: “My daughters heard about Maria, what she was doing with fashion, and they said, ‘You’re going with Maria.’”

Sharapova was ranked 18th at the time and was struggling to regain her form after two shoulder surgeries. She and Hogstedt set two simple but very ambitious goals: to get her back to number one, and to see her win another major. In 2012, they checked off both boxes: Sharapova won the French Open, completing a career grand slam, and she reclaimed the number one ranking. For Hogstedt, the three years that he worked with Sharapova was the most fruitful and satisfying collaboration of his coaching career. He said the leeway that Sharapova’s parents and her agent, Max Eisenbud (who also repped Li Na), gave him to tinker with her game and to assemble a first-rate support team was vital to getting her back to the top. But the main ingredient, he said, was Sharapova’s attitude—her willingness to take instruction and to embrace change “A lot of players would have resisted, but the way she commits, the way she follows her team—she’s unbelievable that way,” he said. He admitted that it was tough to move on. “It is not easy after that to coach other players,” he said. “It took some time.”

He worked briefly with Halep and also with Caroline Wozniacki. Last year, Eisenbud recruited him to coach another WME/IMG client, Madison Keys. During their seven months together, Keys broke into the top 10, but she terminated the relationship in November. If there were hard feelings, Hogstedt didn’t let on. “She will for sure win a slam soon; she has a huge game,” he told me. He went on to say that because of players like Keys, who has a concussive serve and equally massive groundstrokes, the women’s game is quickly converging with the men’s game, and coaching strategies must evolve accordingly. As laidback as he seems, Hogstedt has very firm ideas about how a player should train. He prefers relatively short and very intense sessions that simulate match conditions as closely as possible. It is something that he picked up as a junior, when he served as an occasional sparring partner for Borg. Borg, he said, had no interest in drilling—he just wanted to play, and he treated every hit as it if were the Wimbledon final (which, among other things, meant giving the guy on the other side of the net the silent treatment: “on the court, he never said a word to us”). Replicating match conditions nowadays, Hogstedt told me, requires putting particular emphasis on the first three shots of a rally. In his view, the serve, the return, and the third ball matter more than ever now, and practice sessions must reflect this. “This is where the future is,” he said.

On the topic of tennis’s evolution, we also discussed on-court coaching, which is permitted by the WTA but is a source of some controversy. Hogstedt was admirably candid; “I don’t think I would have liked it as a player, but as a coach, I like it a lot,” he said with a smile. There’s a lot that he likes about the game; even after all these years, he is still besotted with tennis and still pinching himself over the life that the sport has afforded him. “I’m working, but it’s unbelievable to get to go around and watch all this great tennis,” he said. No doubt, that enthusiasm has also contributed significantly to his durability as a coach.