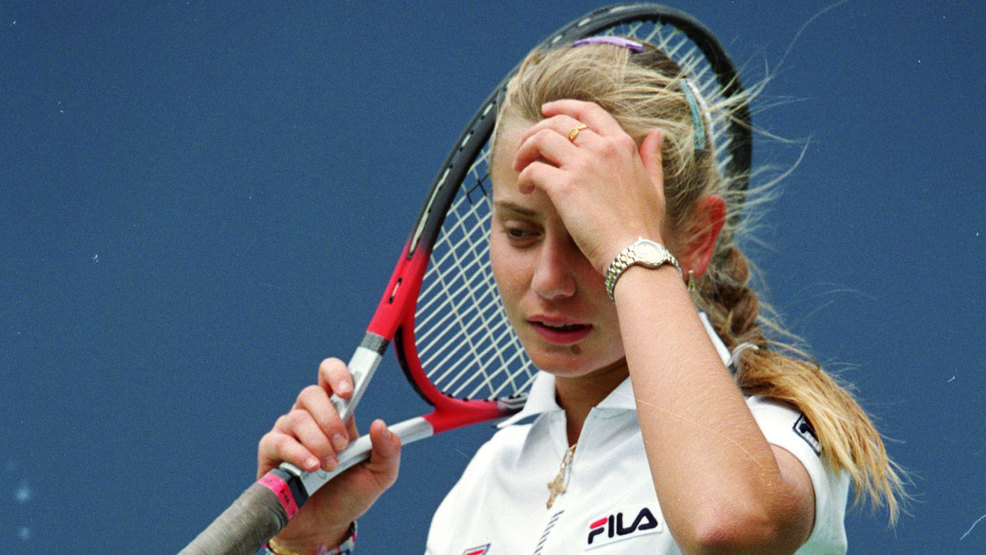 This isn’t mean to sound as crass as it probably will, but Jelena Dokic could not have timed her memoir any better. In the six weeks since The New York Times and The New Yorker published exposés about Harvey Weinstein’s history of sexual predation, this has become the season for unmasking abusive men. Dokic’s autobiography, Unbreakable, released last weekend in Australia, is the latest unmasking, but with an especially tragic twist: her abuser was her father. The book describes the physical and emotional torment that Dokic, whose family moved to Australia from the former Yugoslavia when she was 11, suffered at the hands of her father Damir. She alleges that he routinely whipped her with a leather belt, hit her with a boot, kicked her, pulled her hair, spat at her, and called her vulgar names. She says that one beating left her unconscious and that she came close to committing suicide.

Unbreakable has caused an uproar in Australia. Tennis officials there are being accused of ignoring blatant evidence that there was something dangerously askew in the Dokic household. Dokic is among those pointing a finger. “From childhood through my late teens and even into my early 20s, when it was obvious that I was on the receiving end of constant abuse, individuals told themselves it wasn’t their problem, chose to ignore it,” she writes. In a statement issued Sunday, Tennis Australia said attempts were made to intervene on Dokic’s behalf and that the police were even contacted, but ultimately nothing could be done because “those directly involved” declined to cooperate. The press release also said that “all of us at Tennis Australia applaud Jelena’s courage in telling her story” and that “over the past 10 years tennis has been constantly improving and updating policies to increase protection for children.”

The Dokic revelations are a flashback to a difficult era in women’s tennis, when the game saw an influx of teenage phenoms and tyrannical fathers. Some of the dads were just overbearing, insufferable figures who made life hell for tournament organizers, sponsors, agents, and anyone else who crossed them. But others were truly sinister people who abused their kids. The most notorious was Jim Pierce, the father of Mary Pierce. He beat and bullied her and her mother to the point that they were forced to get restraining orders against him and to hire 24-hour protection. In 1993, Sports Illustrated published a cover story about the situation under the headline, “Why Mary Pierce Fears for Her Life.” That was the same year the WTA banned Jim Pierce from all of its events.

Dokic turned pro in 1998, when she was 15. I can’t recall the first time I saw her play, nor do I remember if Damir Dokic had already caused turmoil. I do recall being struck by how sad she looked; there was none of the sparkle and playfulness you would expect of someone her age. But that didn’t seem to matter on court. A year after turning pro, Dokic qualified for the main draw at Wimbledon, took out Martina Hingis, the top seed, in the first round and went on to reach the quarterfinals. In 2002, she made the semifinals at Wimbledon and got to number four in the world, which would be her career high. By then, however, her father had become a noxious presence on the tour. In 2000, he was expelled from Wimbledon for a day after getting belligerent and smashing a journalist’s phone. At the US Open a few months later, he flew into a rage over the price of a salmon entrée in the players’ lounge and was forcibly expelled from the grounds of the tournament, his credentials revoked. A New York Times account of the fracas described Jelena Dokic as “stunned and tearful” as she watched her father’s meltdown. As bad as her situation appeared to be at that time, we now know, thanks to her book, that it was so much worse than we even imagined.

Did tennis fail her? It would be hard to argue otherwise. While the statement from Tennis Australia did not get into specifics, it is clear that there were people who knew Dokic was being abused or who strongly suspected as much. It will be interesting to see if any players or coaches who were around at the time come forward to acknowledge that they noticed or heard things that made them concerned for her welfare. They owe it to Dokic and to tennis to speak up. Obviously, it was a fraught situation—it was a family matter, which put it in a different category than, say, Weinstein's transgressions. But if the WTA or Tennis Australia or a couple of her peers had intervened aggressively, Dokic might have been spared a great deal of suffering. Now that she has shared her story, it is important that there be a full accounting of what happened. There were undoubtedly plenty of indications that she was being harmed physically and emotionally; getting it all out in the open might help prevent similar abuses in the future.

Because here’s the thing: Dokic and Pierce were surely not the only tennis players to suffer such abuse. The reason we are aware of what happened to them is because they made it onto the pro tour and had enough success to command our attention. Thousands of talented players never got that far, and given what we know about tennis culture and tennis parents, it has to be assumed that, like Dokic and Pierce, some of them were punished for their lapses and failures with raised hands and clenched fists. But their stories remain untold because they didn’t reach the game's highest rung. It would also be naïve to think that this problem went away with Dokic and Pierce. In the years since they played, the competition has grown deeper, the odds of reaching the pros that much longer. The conditions that produced monsters like Damir Dokic and Jim Pierce have only gotten more extreme. Unbreakable should be read not just as a memoir, but as a cautionary tale, too