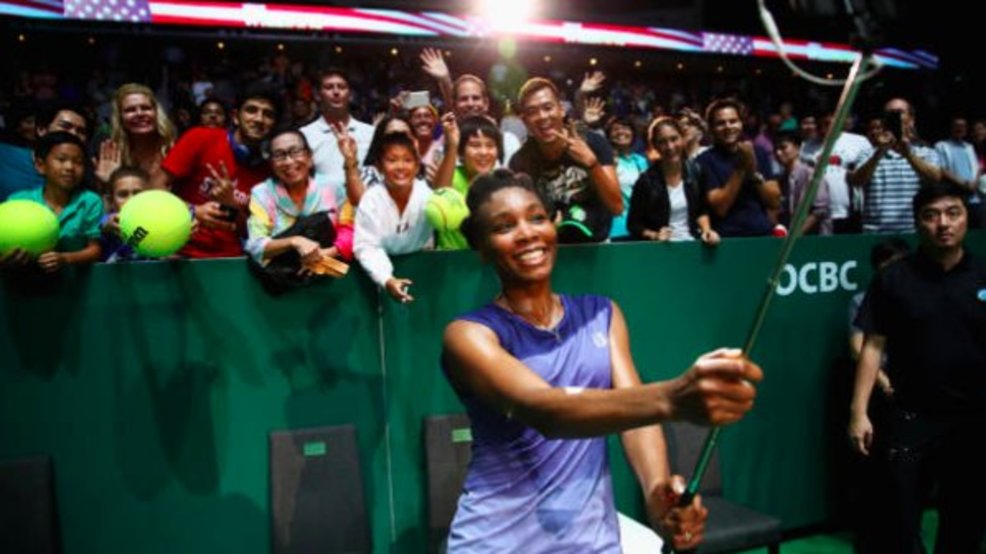 When the present era in tennis ends—and, sadly, it will come to an end—the game will be thrust into a period of mourning the likes of which maybe no sport has ever experienced. Forgive the cliché, but this has been tennis’s greatest generation, and when Roger and Rafa and Serena and Novak (combined haul: 70 grand slam singles titles) decide to retire, it is going to suck, plain and simple. But as much as I will miss the Big Four—the real Big Four, the one that includes Serena—I’ve come to realize that the player I’m probably going to miss the most is Venus Williams. I adore her game and admire her resilience. I love her sunny disposition. But odd as it may sound, what I cherish most about Venus is her enigmatic character. As warm and engaging as she is, there is a side to her that is walled off from us. Years ago, Sports Illustrated’s Sally Jenkins likened Venus to Greta Garbo. There is definitely something Garboesque about her: we never quite know what thoughts and emotions lay behind that placid visage. It is a rare attribute in a sports star these days, and it is a part of what makes Venus such a singularly intriguing figure.

I’m sounding a valedictory note here even though Venus appears to be inching away from retirement, not moving closer to it. Beginning with her improbable run to the final of the Australian Open in January, where she lost to her pregnant sister, she has had a remarkable year and is finishing it just as strongly as she started it: she’s in the semifinals of the BNP Paribas WTA finals in Singapore thanks to her emphatic win yesterday over Garbine Muguruza. She plays Caroline Garcia tomorrow for a spot in the final. Although Venus fell just short of winning her first major since 2008 and her eighth overall, she reached the finals of two slams this season and is back up to fifth in the world, and given how well she is playing and moving, there is every reason to believe the 37-year-old American will be just as strong a contender in 2018.

Of course, her kid sister and career-long foil Serena will be back from maternity leave next year, which will undoubtedly complicate Venus’s quest for another major. But that’s a conversation for another day; let’s talk about what this year has meant for Venus. Serena’s hiatus put the spotlight squarely on Venus, and while the elder Williams has always been popular, the outpouring of affection for her this year was beyond anything we have seen before. With Serena sidelined, it has been an opportunity to appreciate Venus’s enduring greatness and to reflect on her place in the sport. I’ve always been a huge fan of her game. What I love is that, even as her tennis has matured and improved, it retains the same youthful dynamism that made her such a compelling player when she came onto the scene 20 years ago, reaching the final of the 1997 US Open as a 17-year-old (her opponent that day? Martina Hingis, who announced yesterday that she is retiring for the third and presumably final time). The long limbs flying everywhere, the hypnotic foot speed, the power and willowy athleticism—stylistically, Venus has always been sui generis and a sheer pleasure to watch.

Over the course of her career, Venus has also been challenged in some unique, and uniquely difficult, ways. As much as she and her sister love each other—and their fierce bond is part of what makes them arguably the greatest sports story ever—it cannot always have been easy for Venus to be eclipsed time and again by Serena. Both Williamses have encountered racism during their careers, notably that ugly scene at Indian Wells in 2001. Venus has also battled chronic illness—Sjogren’s syndrome, an autoimmune disease that threatened her career. I can’t think of very many athletes who have been tested to the degree that she has. Her resilience is admirable, but even more impressive is her graciousness. There has never been a trace of bitterness, resentment, self-pity. Quite the opposite: even after all this, there is an effervescence about her, a perpetual bubbliness that is totally charming and infectious.

And yet, paradoxical as it might seem, she is also reserved. She is never aloof or cagey, but she guards her privacy and appears to have no interest in letting the world get too close and personal (the one exception was the 2013 documentary about her and Serena; as you might recall, the Williamses cooperated with the filmmakers but later withdrew their support because they were angry about how their father Richard was portrayed). When Venus was asked if she knew prior to the Australian final that Serena was pregnant, she politely demurred, saying “I don’t know everything about her.” Given how close the sisters are, it was hard to imagine that she didn’t know, and Serena, in a subsequent interview with Vanity Fair, confirmed that she had known. But Venus just wanted to keep that experience, that moment to herself. We live in a confessional, tell-all age, and as a journalist, I am supposed to want athletes to bare their souls. But here’s the thing: I like the fact that Venus doesn’t play along, that there is this inscrutability about her. It’s not an act—it’s just who she is and how she chooses to engage with the world. She fascinates me in a way that no other current player does, and I’m going to miss that. Happily for me, happily for us, it looks like she is going to remain a current player for some time to come.