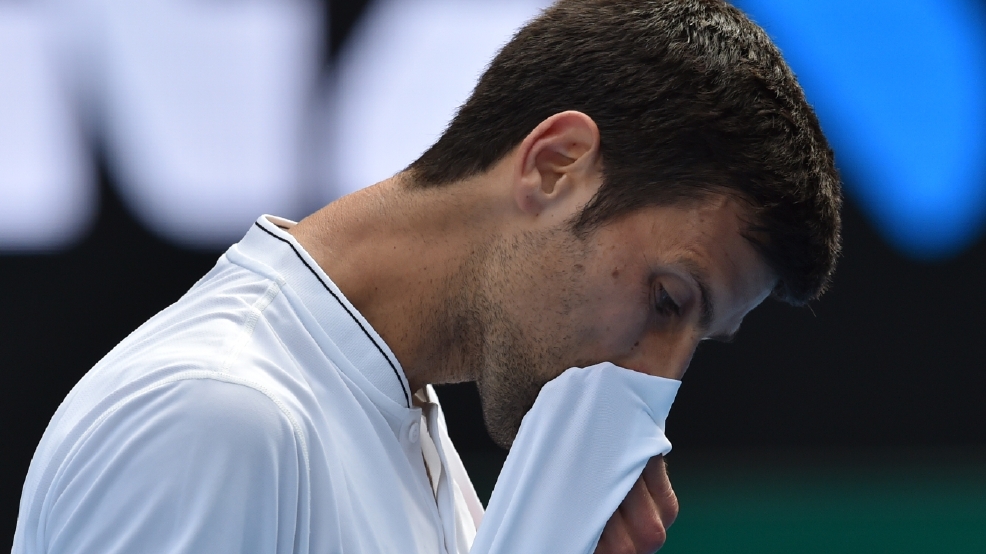 Joe Louis kept fighting into his late thirties. Once, near the end of his career, he was asked about the challenge of boxing past 35. “My age, what happen all depend on how you feel when you get up that day,” he replied. It was an answer that spoke to the essence of athletic decline: our bodies betray us. Great champions usually stop being great because they lose their speed, stamina, and endurance and become increasingly prone to injury, all of which slowly (or quickly) robs them of the ability to compete at the highest levels. But what happens when a champion, seemingly at the peak of his athleticism, loses his desire, and is this what has happened to Novak Djokovic?

With Djokovic’s second-round exit at this year’s Australian Open, arguably the biggest upset the men’s game has seen since Georg Bastl shocked Pete Sampras in the second round at Wimbledon in 2002, there is suddenly a lot of conjecture about whether the 12-time major winner is suffering a crisis of motivation. Djokovic’s loss to Denis Istomin in Melbourne followed his third-round defeat at Wimbledon last July to Sam Querrey, a first-round loss at the Olympics to Juan Martin del Potro, a loss to Stan Wawrinka in the US Open final in September, and a loss to Andy Murray in the title match of the Barclays ATP World Finals in November. When Djokovic won the French Open last June, finally claiming the major that had eluded him, it looked as if he was poised to dominate men’s tennis to a degree never before seen. At that point, he held all four major titles and was halfway to a calendar slam, and it seemed entirely reasonable to believe that he would win another six or seven majors before age, the competition, or boredom caught up with him.

Instead, he fell into a rut. Sure, Querrey, del Potro, Wawrinka, Murray, and Istomin are all quality opponents who played exceptionally well to get those wins. However, five consecutive big-event losses is a trend, and there is no denying that Djokovic hasn’t been himself since Paris. After falling to Wawrinka in New York, Djokovic admitted that he’d struggled to “re-engage” following his French Open win but was happy to be back on the court and ready to resume winning. When he beat Murray in Doha a few weeks ago, it appeared he was fully re-engaged.

That turned out not to be the case, and the loss to Istomin has raised questions about his hunger. In his presser following the match, Djokovic politely brushed aside questions about ambition and drive. “It’s not a time now to go so deep into it,” he said. But Boris Becker, his former coach, wasn’t so reticent. He told Christopher Clarey of The New York Times that Djokovic had lacked his normal intensity in the match against Istomin. “I didn’t recognize him today, his mentality,” Becker said. He also claimed that one of the reasons he stopped working with Djokovic—they ended their three-year relationship last month—was because he sensed that tennis was no longer as high a priority for him. When the split was announced, Becker said that Djokovic hadn’t been spending as much time as usual on the practice court since winning Roland Garros and needed to “go back to workback to the office.”

It is certainly possible that Djokovic has run out of inspiration and desire. He trained harder than probably anyone and led a famously ascetic existence (an oft-repeated story is that he celebrated winning the 2012 Australian, when he outlasted Rafael Nadal in a five-set final that took nearly six hours, by treating himself to a square of chocolate—yes, one tiny square of chocolate). He is now a father, and it could be that, having completed a career slam, he is tired of sacrificing so much for the game. This is purely speculation, but perhaps he has also grown frustrated at his inability to win the thing he seems to covet the most: the affection of tennis fans. For years, he has tried—too hard sometimes—to be a crowd pleaser, to charm spectators and to gain not just their respect, but their love. However, it is clear that he will never command anything like the adoration that his rivals Roger Federer and (to a slightly lesser extent) Nadal enjoy, and maybe this has sapped his enthusiasm.

If motivation is indeed the problem, Djokovic would not be the first tennis superstar to lose his competitive ardor. Former world number one and current Tennis Channel commentator Jim Courier struggled with motivation during the second half of the 1993 season. After unexpectedly winning the French in 1991, Courier went on a 24-month tear in which he successfully defended his French title, won back-to-back Australians, made the finals of three other majors, and soared to the top of the rankings. But after losing in the final of the 93 French and in the Wimbledon final a few weeks later, he lost his drive. He did win Indianapolis later that summer, but lost before the quarterfinals in each of his next six tournaments, including the US Open, and seemed completely checked out. Playing a match in the ATP Tour World Championship that November, he read a novel (Maybe the Moon, by Armistead Maupin) during changeovers. During the same match, he told his box, “You know what’s going through my head? I wonder if Nafta passed.”

Courier was in a better frame of mind when the 1994 season started. He reached the semifinals of both the Australian and the French, but by late that summer, he was once again struggling with burnout and ennui. While Courier continued playing for another six years, he never won another slam and never got back to number one.

Despite his recent travails, it is hard to imagine Djokovic suffering a similarly abrupt decline. It is worth recalling that there has been a lot of ebb and flow to his career. The first major that he won was the 2008 Australian. This was followed by a three-year stretch in which he reached the final of just one slam—the 2010 US Open, where he fell to Nadal—and seemed uncertain about what he wanted from tennis and how much he was prepared to give to the game. In addition, he struggled with health issues during this period and changed racket brands. Then, suddenly, everything came together, and between January 2011 and January 2013, he won five slams, including three straight Australians, and reached the finals of two others. But that charmed run soon gave way to another rough patch, during which he lost in the finals of three majors and appeared to lose self-belief. A gutsy five-set win over Federer in the 2014 Wimbledon final set him back on course, and he captured five of the next seven slams, culminating with his victory in Paris last June.

It could be that this latest downturn is just a prelude to another period of dominance. But with Djokovic turning 30 in May, a prolonged slump could easily morph into a permanent one. Last year’s French was the crowning achievement of his career to date. With his early exit from Melbourne, this year’s French looms as a bellwether for how the remainder of his career may unfold.