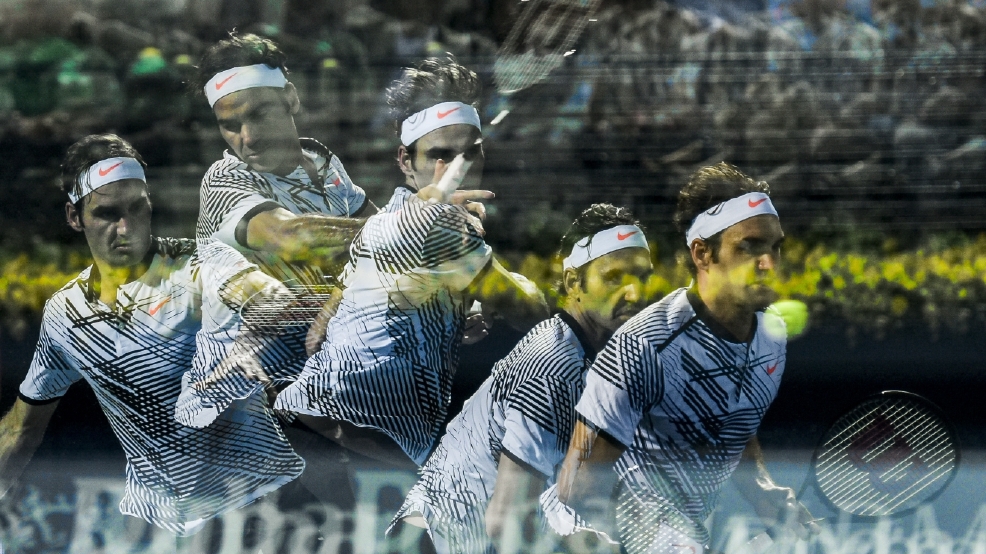 If, back in September, someone had asked me which was likelier to happenDonald Trump winning the election, the wrong film being announced as the winner of the Academy Award for Best Picture, or Roger Federer winning the 2017 Australian Open and reestablishing himself as the dominant figure in the men’s gameI would have laughed and said none of the above.

Six months hence, Trump is tweeting from the Lincoln Bedroom, the Academy of Motion Picture Arts and Sciences is reeling from the biggest embarrassment in the history of the Oscars, and Federer, after winning the Australian, is closing in on a sunshine double and looking virtually unbeatable.

I have thoughts about Trump and about Moonlight (I haven’t seen La La Land), but this is not the place to express them. I also have thoughts about Federer, which I’m happy to share. That he won the Australian at the age of 35, five years after he’d last won a major and after taking six months off to rehab his knee, was nuts. That he has gone on to win Indian Wells and is now on course to take Miami, too, is mind-bending. This season was shaping up to be his farewell tour, or at least the prelude to one. Instead, it has become the Federer Revival Tour, and who knows where it goes from here. An eighth Wimbledon crown? Another US Open? A second French? Can he pull even again with Serena for total grand slam singles titles? How about a gold medal in Tokyo in three years? For reasons you can surely understand, I am now out of the business of ruling things outand with Federer at the moment, anything really does seem possible.

It goes without saying (but I’m saying it anyway) that 35-year-olds are not supposed to be winning majors and threatening to reclaim the number one ranking (and, yes, the same accolade extends to Serena). Sure, other players have exhibited impressive longevity; Andre Agassi, to name one, competed into his mid-thirties, and even reached the final of the US Open when he was 35, in 2005 (his opponent, as you might recall, was Federer, who won the match in four sets). However, what Federer is doing is in another dimension. If nothing else, stamina should be a problem for a player his age, but it doesn't appear to be an issue for Federer: he won three five-setters en route to his victory in Melbourne. Old guys are also prone to slow starts and lapses in concentration, but Federer 2.0 seems immune to that, too: he didn’t drop a set in Indian Wells and hasn’t surrendered one yet in Miami, either.

But there’s a deeper story here than just the actuarial improbability of what Federer is achieving. In tennis, every era has at least one dominant player, and usually a couple who combine to hoard all the big prizes. At some point, they begin to fade, and the game enters a kind of interregnum. The next superstars are starting to emerge but are not quite ready to seize control. There’s a momentary void, which creates opportunities for players who would otherwise be perennial also-rans. The last time the men’s game had this kind of gap was in the early 2000s. Pete Sampras and Agassi were both past their peaks, a probable heir, Federer, was working his way up the rankings, and an opening had formed for players like Lleyton Hewitt and Andy Roddicksensational players, to be sure, but not guys who were capable of winning a dozen majors and dominating in the way that Sampras had and that Federer soon would. Hewitt and Roddick were transitional figures, who took advantage of a generational shift to pocket a couple of slams. Hewitt won the US Open in 2001 and Wimbledon the next year, while Roddick took the US Open in 2003. Four months later, Federer won the Australian, followed it up with victories at Wimbledon and the US Open, and the window for players like Hewitt and Roddick slammed shut.

It is looking more and more like we’ve entered another transitional phase in the men’s game. We have a pretty good idea now who the next superstars are likely to be. In fact, they are playing each other in the quarterfinals tomorrow in Miami. I’m referring, of course, to Nick Kyrgios and Sascha Zverev. During this month’s US hardcourt swing, Kyrgios has shown that a) he is growing up; b) has come to terms with the fact that he’s a tennis prodigy and not a shooting guard in the NBA; c) is just about ready to win a major; and d) undeniably has the talent to win a bunch of majors. Zverev, two years younger, is perhaps not quite as far along on the development curve, but barring injury he is a virtual lock to be at the top of the rankings for the next decade or so. Kyrgios and Zverev played for the first time two weeks ago in Indian Wells; there’s an excellent chance that we are witnessing the birth of the next great rivalry in men’s tennis.

At the same time, the era of the Big Four is just about over. Sure, Rafael Nadal has had an encouraging start to 2017, but he is clearly not the human bulldozer that he was five years ago. For reasons that remain unclear, Novak Djokovic has been in a tailspin since winning the French last year. After his victory at Wimbledon, it looked as if Andy Murray was going to own the men’s game for a while, but he lost in the quarterfinals at the US Open and in the fourth round at the Australian, lost in his opening match at Indian Wells, and is now sidelined with an elbow injury. Murray and Djokovic might reassert their supremacy this summer, but both turn 30 in May, and it is possible we have seen the best of both.

Most of us figured we’d seen the best of Federer. He was the oldest member of the Big Four and the first to show slippage. When he lost his footing and fell during the fifth set of his semifinal loss to Milos Raonic at Wimbledon last year, it seemed like a moment freighted with symbolism. The most graceful athlete the sport had ever known tumbling to the ground, his racket slipping from his hand and sliding across the grassit was like an obituary in the form of an image. And yet here we are, just eight months later, and Federer is poised to sweep the three most important titles of the first part of the season and has effectively become the number one player in the world again. In reclaiming his place atop the sport, he is totally subverting tennis's normal pattern of generational succession. Federer was the most dominant player of his era. That era is now ending, but instead of some Hewitt-like figure taking advantage of the void that is beginning to form, it’s a resurgent Federer who is cashing in on it. He’s like that 65-year-old guy on his third marriage who fathers a kid that is younger than his grandchildrena strained analogy, I admit (with a strong yuck factor, too), but you get my point.

At any rate, watching Federer right now is an almost hallucinatory experienceyou can’t quite believe what you are seeing. Savor it while it lasts.