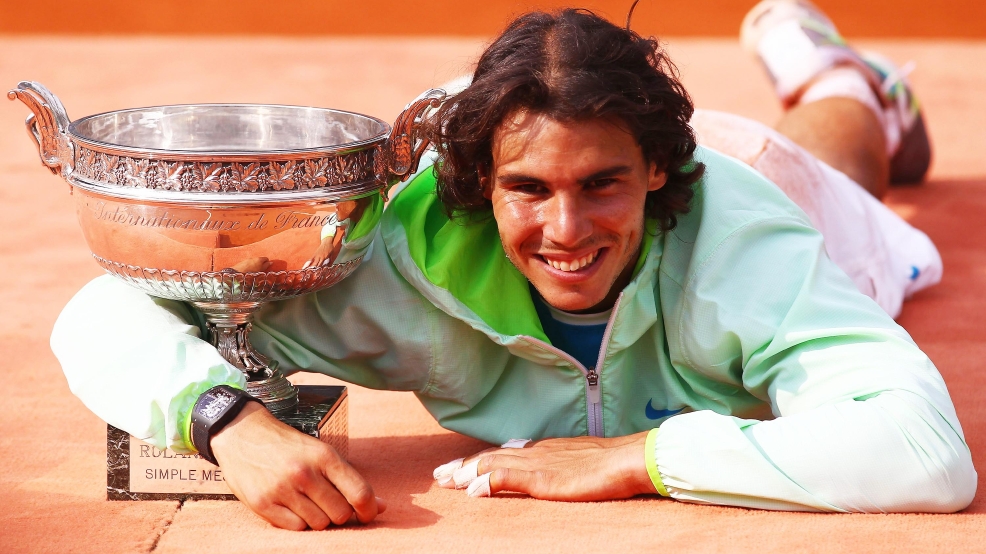 PARIS - JUNE 06: Rafael Nadal of Spain celebrates with the trophy after winning the men's singles final match between Rafael Nadal of Spain and Robin Soderling of Sweden on day fifteen of the French Open at Roland Garros on June 6, 2010 in Paris, France. (Photo by Julian Finney/Getty Images)

It is often said that being a pundit means never having to say you are sorry or to concede that you were wrong. In the brief time that I’ve been commentating in this space, I don’t think I’ve written anything that requires an apology. But it appears I may have been wrong about Rafael Nadal. A few weeks ago, in an article about Roger Federer’s comeback, I said that Nadal was no longer the “human bulldozer” that he was five years ago. I may have spoken too soon. Having won both Monte Carlo and Barcelona, the Spaniard is looking like his old indomitable self on clay—a human bulldozer tearing up the terre battue (forgive me for torturing that particular metaphor). He’s a favorite in Madrid this week and Rome next week, and at this point it would be surprising if his clay court season doesn’t end with a 10th French Open title, adding to the record that he already holds for most victories at a single major.

Nadal has now captured Monte Carlo and Barcelona 10 times each, and if he wins in Rome, it will be his eighth Italian Open title. The modern-era men’s game has never seen a player so totally dominant on one surface, and the fact that Nadal has managed to do this in an era that includes Roger Federer and Novak Djokovic makes it all the more amazing. (Think about how many French Open titles Federer might have but for Nadal. Four? Five? Six? Djokovic would surely have three or four by now.) What Nadal has achieved on clay can’t be reduced to one, holy-crap data point (winning percentage just doesn’t cut it—for the record, he has won 91.58 percent of his matches on clay). But given the singular challenge of playing on clay, and given the era in which Nadal has competed, I’d argue that his clay court record deserves to be held in almost as much awe as Federer’s 18 major titles.

Almost. I’ve already cast my vote in the GOAT sweepstakes, and I’m not rescinding it or hedging or wavering. I think Federer has earned that distinction, a judgment based in part on career stats, principally those 18 majors, and in part on aesthetics—no one has ever played the game more beautifully. But Nadal, with 14 major titles and a still-lopsided advantage over Federer in their head-to-head record, runs a close second (in my opinion), and I think the time has come to change the way we think about the relationship of Rafa to clay. Although he has won five majors on surfaces other than clay and long ago broke free of the “clay court specialist” label, the fact that he has done most of his winning on clay has long been seen by commentators and fans as a mark against him. Yes, but is the constant refrain—Yes, Rafa has won 14 majors, but nine came on clay; yes, Rafa has a 23-14 against Roger, but 15 of the matches were on clay; etc.

This line of reasoning implies that clay is somehow an inferior surface and that results on clay matter less than results on hard courts or even grass. Personally, I find that a very peculiar way of thinking about clay, and a completely outdated one. Sure, 30 years ago, one could have argued that clay was a lesser surface. Back then, matches on clay tended to be wars of attrition and often devolved into moonball fests (and I should emphasize here that I’m talking about red clay, not Har-Tru). But thanks to the revolution we’ve seen in racket and string technology, clay court tennis has become far more explosive, but at no cost to its essential character (in contrast to what has happened with grass, at least at Wimbledon—a surface that was made for serve-and-volley tennis has become just another showcase for the power baseline game). Cheap points are still hard to come by on clay, rallies must be meticulously constructed. To my eyes, clay is the most demanding surface. It tests a player’s completeness—court smarts, touch, endurance—to a greater degree than either hard courts or grass.

That Nadal has done most of his winning on red clay doesn’t detract from his greatness; it affirms and amplifies it. Obviously, if his only success had come on clay—if he’d turned out to be just a one-surface wonder—he’d probably be on no one’s short list of top five or top three all-time greats. But in winning both Wimbledon and the US Open twice and the Australian once (and don’t forget that he has also been runner-up three times at Wimbledon, three times in Melbourne, and once in New York), he emphatically demonstrated his all-court aptitude, and this, coupled with his almost unfathomable dominance on clay, has made him, well, let’s call him the almost-GOAT.

A resurgent Federer was the story in the first quarter of the 2017 season; with his victories in Melbourne, Indian Wells, and Miami, he strengthened his claim to GOAT status and (further) burnished his legend. The second quarter has belonged to his friend and rival Nadal; he has spent this spring padding an already historic resume. A Federer-Nadal final in Paris would be both awesome and apt. But even though I’ve spent the last several hundred words extolling the virtues of clay, what I’m really hoping is that this year ends with a Federer-Nadal final in the one place they’ve never met: on a hard court in Flushing Meadows.

In the meantime, I’m happily eating my words from a few weeks ago. It appears the human bulldozer is back.