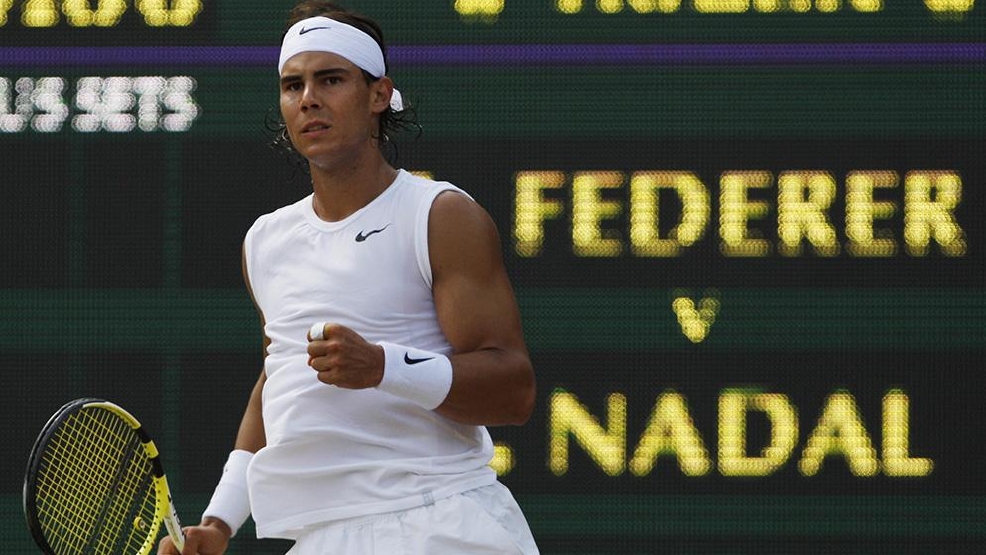 Michael Steinberger: Picking up the Pace

In the summer of 2008, I spent a week at the beach with my wife and kids. The first day of our vacation coincided with the Wimbledon men’s final between Roger Federer and Rafael Nadal.

As I settled into the couch that morning to watch the match, I assured my wife that we’d be at the beach by early afternoon. She and the kids did indeed hit the beach just after lunch. I, of course, never got there: Federer and Nadal played arguably the greatest match in tennis history, an epic that lasted nearly five hours and that because of multiple rain delays wasn’t decided until nearly 9:15pm London time, which was 4:15pm my time. Breakfast at Wimbledon became Cocktail Hour at Wimbledon. When they got back from the beach, my wife and children greeted me with stony silence.

The following year, we returned to the same rental house, and our first full day of vacation once again coincided with the Wimbledon men’s final, this one between Federer and Andy Roddick. Only after I promised my wife that there was zero chance the match would screw up our day—“honey, the forecast for London is great, and they’ve got a roof over Centre Court now—you have nothing to worry about!”—did she agree to let me turn on the television. That was an unforced error on her part. Federer and Roddick went the distance, and the 30-game, 95-minute fifth set took the match well past the four-hour mark. I did make it to the beach that afternoon, but I got there two hours after my wife and kids, and they greeted me with silence again.

When we started dating, my wife was pleased to discover that I was a lukewarm NFL fan and that she’d never be a football widow. Little did she know that she would become a tennis widow instead.

But I don’t blame myself for that: I blame it on tennis, and how the sport has evolved. While it might be a slight exaggeration to say that tennis is seeing an epidemic of marathon matches, there have been enough of them in the last decade to touch off a spirited discussion about whether the sport needs to find a way to speed things up. Just yesterday, Ivo Karlovic and Horacio Zeballos spent over five hours on court in their first-round match at the Australian Open. The fifth set went 42 games and took more than 2 1/2 hours to complete, with Karlovic finally securing a break in the 42nd game to take the set and the match. When you sit down to watch a best-of-five match these days, you do so knowing that you may need to commit four or five hours of your time if you don’t want to miss a point. That’s a lot to ask of even the most ardent fan. Some matches now take longer than the Super Bowl, the World Cup final (even when it goes to penalty kicks), and a full round of pro golf. The famous John Isner-Nicolas Mahut match at Wimbledon in 2010 lasted nearly as long as Wagner’s Ring cycle, eating up 11 hours and requiring three days to complete. Sure, that was extreme, but matches lasting four hours or more are not uncommon now.

The problem is that all of these protracted matches are coming a time when attention spans are getting shorter and shorter, and a lot of people think that if tennis is to continue to prosper, it must adjust to the demands of a smartphone-addled audience. How might it do so? One oft-heard suggestion is to do away with best-of-five matches and to have the men play best-of-three, just as the women do. A few years ago, Tennis Australia unveiled an experimental scoring system, called Fast4, that is generating a lot of interest. It features no-ad scoring, sets that go just four games, and five-point tiebreakers with no requirement to win by two. In addition, let serves are played. Both the ATP and the WTA have turned doubles into a hotbed of innovation. For all doubles tournaments other than the four slams, they now use no-ad scoring, and instead of playing third sets, matches that are tied one-set all are decided by 10-point tiebreakers.

For one thing, it is not clear that there is a link between match length and television ratings. Tennis Channel has seen a recent uptick in viewership. Fluctuations in American television audience seem more closely tied to the fortunes of American players. When Serena Williams played Caroline Wozniacki in the US Open final two years ago, the match drew 4.3 million viewers on CBS. Last year’s final between Angelique Kerber and Karolina Pliskova attracted just 1.5 million. The last time an American man reached the final was in 2006, when Roddick played Federer. The match pulled in 6 million viewers. Last year’s final between Novak Djokovic and Stan Wawrinka had a measly 1.7 million. (True, Williams-Wozniacki and Roddick-Federer matches were shown on CBS while last year’s finals were carried by ESPN. But it’s not as if ESPN lacks reach.) There may have been other factors involved in these disparities but if Americans start doing better, the television numbers will surely improve.

It could also be that the era of the marathon match—if it can even be called that—is just a passing phase. While it is hard to imagine serve-and-volley tennis making a comeback, you never know. Twenty five years ago, we were all frustrated by the paucity of extended rallies at Wimbledon (Sampras-Ivanisevic anyone?). Nowadays, the problem is a surfeit of 20-stroke points. If a couple of younger players lose patience with these wars of attrition and begin journeying to the net with greater frequency or become even more aggressive from the back of the court, it could change the way the game is played. Tournament organizers could also speed up their surfaces to encourage more risk-taking, which would reduce match times. Tennis doesn’t need to reinvent itself to address a problem that a) may self-correct at some point; and b) that can be fixed by other, less draconian measures.

That said, there is no denying that the men’s game, at least, could use a little speeding up. To that end, I think Wimbledon, the French, and the Australian should join the US Open in using tiebreakers to decide deadlocked final sets. Many of the marathon matches that we’ve seen—like the one yesterday between Karlovic and Zeballos—have come at these three majors and have been the result of extended fifth sets,. Instituting final-set tiebreakers would prevent matches from running on interminably and would actually ratchet up the drama. Fifth-set tiebreakers are now used for the Davis Cup; they should be used to settle matches at all four slams. I also think the time has come for no-ad scoring. While traditionalists and diehard fans might love those prolonged stalemates at deuce, casual fans probably find them tedious. In the semifinals of the 2013 US Open, Wawrinka and Djokovic played a 13 deuce game at the start of the fifth set. Coming at such a critical juncture, it was an incredible tug-of-war, but that one game added 20 minutes to a match that was already three hours old. And as with final-set tiebreakers, no-ad scoring would more often than not add drama to matches. It is a lot easier to win one point off Federer’s serve than back-to-back points, and I am all in favor of any tweak that can reduce even slightly the natural advantage that servers have—and lessen the likelihood of a tennis match disrupting my vacation and making me persona non grata with my family.