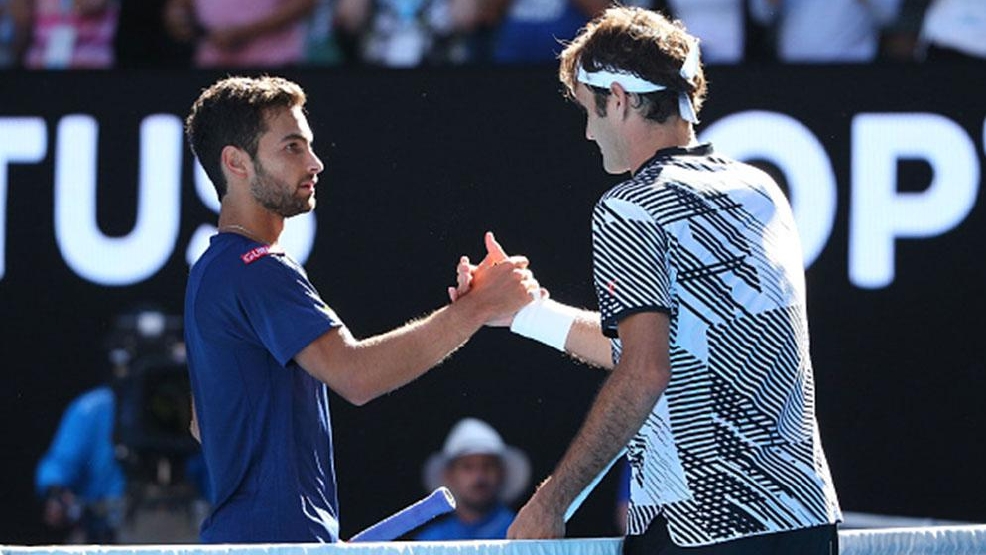 When Reilly Opelka was nine, his coach, Tom Gullikson, took him to see the Western & Southern Open at Cincinnati. At the Gullikson Foundation booth, Tom got him one of those outsize tennis balls and wrote on it, “You’re going to be playing here some day – Capt. Gully.”

Less than ten years later, Opelka returned; beat Jeremy Chardy in the first round and left Jo-Wifried Tsonga looking happy to have escaped with a 7-6, 7-6 victory.

Opelka, at 6ft 11”, is not only the tallest of America’s hugely promising young brigade but seemingly the best equipped to win big on the ATP Tour in the coming years. But he is definitely not alone.

Chatting with Gullikson and his fellow USTA coaches, Jay Berger and Kathy Rinaldi, in the players’ restaurant at Melbourne Park, we had to be careful not leave anyone out because the list of youngsters who are standing on the threshold of stardom is long.

Just, for the moment, concentrating on the boys (and there are plenty of girls in the mix, too) we ran down the list: Opelka, Noah Rubin, Frances Tiafoe, Taylor Fritz, Michael Mmoh, Ernesto Escobedo, Jared Donaldson, Tommy Paul, Mackie MacDonald and Stefan Kozlov.

We agreed that this was, potentially, the best group of American men since Pete Sampras, Andre Agassi, Jim Courier and Michael Chang were ensuring that Americans dominated the world’s top ten.

“In total we had sixteen players in the qualifying here at the Australian Open and five qualified,” said Gullikson. “That’s more than any other country. Win or lose, we want them at Slams, learning, soaking up the atmosphere, getting used to being around big players. With respect, Challengers are important but this is the level they need to aspire to.”

And they will. Obviously the USTA team would have liked them to make bigger inroads into the main draw but early round losses did nothing to take the gloss of their obvious potential.

Noah Rubin, a product of the John McEnroe Academy in New York, defeated fellow American Bjorn Frantangelo in the first round 6-2 in the fifth and then found himself on Rod Laver Arena facing Roger Federer. This was what Gullikson meant about “being around big players.” It was daunting but Rubin acquitted himself well, going down 7-5, 6-3, 7-6.

I asked Federer how far he thought Rubin’s baseline game could take him. He was, I pointed out, at the opposite end of the spectrum from Opelka, both in style of play and height. Rubin is 5 ft 10”.

“I would put him in the category of an aggressive baseliner, of a Nishikori,” Federer replied. “The moment you give him the chance to come in, he will do that. These guys play great, aggressive tennis from the baseline, they pounce fast because they have fast legs.”

Federer said he was very impressed by Noah. “I thought he played really well. I feel like he’s going to have a great, consistent career. It’s hard to tell sometimes with these youngsters because they just need time to mature but I think there’s lots possible for him. I really do.”

Ernest Escobedo also won a round, beating the Russian Danill Medvedev in four sets before losing to the former world No 3 David Ferrer 6-2 in the fourth after winning the first.

Frances Tiafoe beat Kazakhstan’s Mikhail Kukushkin in four sets in Round One but then ran into the best of international teenagers, Sascha Zverev and lost in straight sets. Tiafoe, who grew up at the College Park Tennis Center in Maryland where his father, a native of Sierra Leone, was a caretaker, had grown since I saw him win the Orange Bowl at Plantation, FL at the age of 15 three years ago and Gullikson feels his big game, enhanced by an improved serve, has much to offer.

Of the others, Taylor Fritz found the new Sydney champion Gilles Muller too tough, going down 7-6, 7-6, 6-3 while Jared Donaldson won a 6-0 set against Brazil’s Rogerio Dutra Silver but could not hold on to a two set to love lead and went down 6-4 in the fifth.

Michael Mmoh will have learned a thing or two about back court tactics from the clever Frenchman Gilles Simon who beat him 6-1, 6-3, 6-3 but Opelka, I thought, was another story. I watched a lot of his match against another smooth hitting European, David Goffin of Belgium, and came away impressed.

With his height, Reilly’s serve is obviously going to be his main weapon and Kathy Rinaldi was quick to point out that his high kicking second serve is almost as deadly as his first delivery. But that is not all. He moves exceptionally well from a man his size and can volley. And staying in long baseline rallies seems to be no problem for him. He broke Goffin to love to win the second set off the back off four rallies, full of testing ground strokes, finishing off the first set point with a terrific approach shot.

Tom Gullikson first came across him because he is a close friend and golfing partner of Reilly’s father. “I lived on the Palm Coast, just north of Daytona Beach, for four years, looking after Reilly’s tennis,” said Gullikson. “Then Brian Gottfried took over for a while before Jay Berger accepted him at the USTA headquarters at Boca Raton. His parents are both tall so it was no surprise to see him shoot up.”

Then Gullikson highlighted a problem one does not always think of with fast growing kids. “Reilly was growing several inches every year through his teens and, inevitably, went through an awkward phase. You need to make constant adjustments because you need to move three or four inches away from the ball to get a proper swing. It’s not easy.”

Opelka had a foot problem last year that hampered his progress but, for a youngster making his singles debut at Grand Slam level, he made an immediate impact here.

Time will tell who emerges to become the biggest title winner out of this talented group but Opelka should be in the mix as this ambitious bunch of friends battle for bragging rights. American tennis can only benefit.