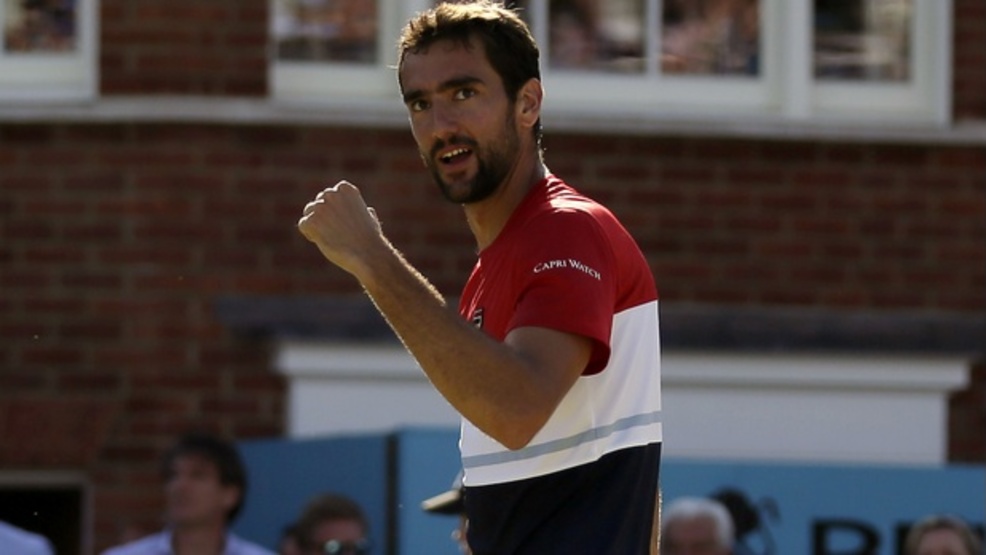 Richard Evans: Cilic Rose to the Occasion to Beat Djokovic in the Queen's Club Final

LONDON—What Herbert Fortescue Lawford, a London stockbroker who won the first ever London grass-court title in 1884, would have thought about the 2018 version we shall never know. But, even in its super-charged modern form, he would have recognized the topspin imparted on the ball by Marin Cilic and Novak Djokovic because he invented it.

The power with which Cilic strikes his forehand may have left Lawford aghast and it certainly left Djokovic helpless as he tried to lay his hands on what would have been his first ATP title since Eastbourne almost exactly a year ago. The fact that Djokovic got as close as a set and 4-1 in the second-set tiebreaker left major questions still unanswered.

On the one hand, the manner in which the Serb overcame the likes of former champion Grigor Dimitrov 6-4, 6-1 in the second round and the big serving Jeremy Chardy 7-5, 6-1 in the semifinal suggested he was climbing back to the level that had seen him dominate the game as world No. 1. But the Djokovic of old would have been unlikely to have allowed Cilic to claw his way back from match point down at 4-5 in the second set and then release his hold on a tiebreaker that was his for the taking with a double fault when he led 4-2.

“Yea, I got a little bit tight there,” a subdued Djokovic admitted in press conference. “Obviously he’s used that. He served well when he needed to but I can definitely take a lot of positives from this week.”

There is no question that Djokovic, with his original coach, Marian Vjada, back at his side, is in a far better frame of mind than he was at the Miami Open in March which, he admitted, was one of the lowest points he has experienced in his career “in terms of my state of mind.”

Frequenting the spacious players’ lounge where gourmet cooking is on offer throughout the day, Djokovic seemed as relaxed as one has seen him for a long time and, even though Serbia lost a desperately close match to Switzerland 2-1 in the last minutes, he was a vociferous soccer fan all week. Once he gets over the opportunity he missed at Queen’s, it seems that Novak could really become a force in the game once again. There is no question the hunger has returned.

Cilic was thrilled, not simply by winning, but having turned the tables on last year’s appearance in the final—he reached match point and eventually lost to Feliciano Lopez.

“I’m feeling great,” he beamed. “This time it was a similar scenario but things turned around with the match point and I was the happier guy at the end. You can’t change too much even when you are break point or match point down. You have to keep going and that’s what I did.”

For Croatia, this sunny Sunday in June will go down as one of the great days in the country’s tennis history, which, of course, is not short of success. Before Cilic won, Borna Coric had pulled off one of the biggest upsets of the year by ending Roger Federer’s 20-match winning streak in Halle, beating the world No. 2 6-2 in the third.

The Coric serve has become a weapon over the last few months but even so, for a clay courter brought up in Zagreb, Borna’s ability to win big on grass came as a complete surprise. Now he will be ranked No. 21 on the ATP computer and, having revealed this new found adaptability, the Top 10 beckons.

Meanwhile, the Queen’s Club was able to savor a new chapter in its long history with the arrival of a sponsor who, quite literally, put some fizz into the proceedings. Fever-Tree is a mixer designed to challenge better known makers of tonic water and, in the UK, has done so with remarkable success. Co-founders Charles Rolls and Tim Warrilow have offices just down the street in Hammersmith and, considering that Queen’s Club members enjoy nothing better than a gin and tonic come sundown – or even earlier – the Fever-Tree product was the perfect fit.

With huge temporary stands reaching to the sky, allowing for crowds of over 9,000, the club has changed a bit since Herbert Lawford’s day and, in any case, it was not at Queen’s that he won that first tournament in 1884. Until Queen’s took over as the host in 1890, it was held at nearby Stamford Bridge where Chelsea play Premiership soccer today. In 1906, Holcombe Ward, one of Dwight Davis’ colleagues on America’s fledgling Davis Cup team, became the first American to win here when he beat compatriot Beals Wright in the final.

Both Cilic and Djokovic emphasized their love of the place and no wonder. In it’s way, the Queen’s Club is unique, offering four racket sports—squash, rackets, court tennis and tennis on three different surfaces—and a roll of honor board that includes Andy Murray, with his five wins, Andy Roddick, Lleyton Hewitt, Boris Becker, John McEnroe and Roy Emerson with four. At the rate he’s going on grass, Marin Cilic, with his two titles and two finals so far, could be in line to join them.