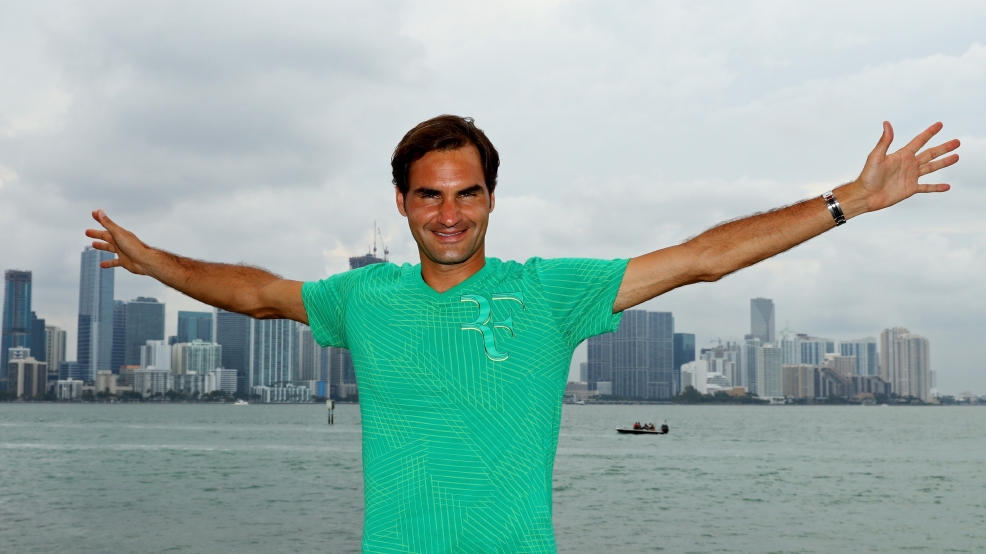 KEY BISCAYNE, FL - APRIL 02: Roger Federer of Switzerland poses in front of the Miami Skyline after defeating Rafael Nadal of Spain during the Men's Final and day 14 of the Miami Open at Crandon Park Tennis Center on April 2, 2017 in Key Biscayne, Florida. (Photo by Al Bello/Getty Images)

Under the swaying palms of the California desert and the Florida Keys, the year’s first two ATP tour 1000 events played out to large and wildly enthusiastic crowds. And if it would be unfair to say all the cheering was for one man, much of the noise was all about Roger Federer, a champion whose performances at the age of 35 continue to defy logic and belief.

There are two pertinent aspects of the titles Federer won at Indian Wells and Miami to go along with his Australian Open crown.

The first concerns the way he, along with Rafa Nadal, stepped so effortlessly into the sudden vacuum created by the two players who were supposed to be the men to chase this year – Andy Murray and Novak Djokovic.

Neither Murray nor Djokovic made any kind of impact at Indian Wells and then absented themselves from Miami, both complaining of elbow injuries. Green lights should have been flashing in the locker room for that little army of highly talented, hard working pros who keep beating on the door of the Top4 and so rarely gain admittance.

Stan Wawrinka, usually the first in line, managed to fight his way through to the final at the BNP Paribas Open after Federer had stopped Nadal in his tracks in just 68 minutes in the quarters, but it was Roger who grabbed the title and when finals day arrived at the Miami Open who walked on court to face each other for the 37th time? You know who.

Federer went on to win the 91st title of a career that seemingly has no end while Nadal was left with the runners-up trophy for the 5th time in Miami. All told, 58 of the last 62 ATP Masters 1000 titles since 2010 have been won by a member of the Top4. That was the stat Greg Sharko of the ATP came up with but let me embellish it. BEFORE 2010, Federer won sixteen 1000’s and Nadal thirteen. These are staggering statistics.

One day, of course, Father Time will have his say but the beauty of this year’s Miami Open lay in the emergence of at least two of the young players who will prove themselves ready to step up in the not too distant future.

The draw set it up perfectly. First we had Nick Kyrgios facing the German teenager Sascha Zverev for the first time at such a big event. It will not be the last. Their quarter final produced everything one could ask of two young players who are still learning their craft.

Zverev, with his blond locks held in place by a wide head band, cuts an attractive figure on court, while Kyrgios has established himself as one of those rare performers that demand your attention – Ilie Nastase, Jimmy Connors, John McEnroe, Andre Agassi are others who come to mind. Obviously the Australian does not compare as far as achievements are concerned as yet but, after Federer, he is well on the way to becoming the biggest ticket seller on the ATP tour.

The entertainment value is undeniable. Kyrgios came up with two tweeners in one point against Zverev and then, after the German had produced an exquisite lob to reach set point at 10-9 in the second set tie break, he tried another and blew it.

“A tweener on set point,” Nick muttered afterwards. “What was that?”

It was Nick Kyrgios. That’s the answer and there is no point in dwelling too long on the tactical niceties. He knew it was the wrong shot but, unlike a year ago, there is evidence now that Kyrgios is learning how to manage his talent. There was no melt down after losing that set and he was the better player in the third, finally winning 6-4, 6-7, 6-3.

The quality of the tennis had been high and the crowd feasted off this glimpse into the game’s future. What came next was the perfect clash of generations – Federer playing a young man thirteen years his junior.

Some critics are already calling Federer’s 7-6, 6-7, 7-6 victory over Kyrgios under the lights the best match of the year (quite a statement after Federer’s five set win over Nadal at the Australian Open) and one of the best they had ever seen. It was hard to argue.

Frequently, Federer’s shot making was majestic but, as in their first meeting which Kyrgios won at Madrid last year, the Swiss could not break Nick’s serve. The pair have now played six sets and all of them have gone to the tie break. Remarkable.

The Australian’s ability to hold serve will, of course, form the bedrock of his game as he moves ever upwards. It is not simply the speed he can generate – regularly touching 135/136 mph – but the way he varies the delivery. He hit an ace that was no more than 115 mph. Occasionally, he would throw in a second serve of around 85 mph. Federer, one of the best returners in the history of the game, worked furiously to find the key but the lock never turned.

A major factor in this extraordinary encounter was the way the Florida crowd made their presence felt. OK, they were always going to scream and jump up and down for Federer but a section of them decided there had to be a villain as well and were absurdly harsh on Kyrgios.

Apart from bouncing his racket just hard enough for it to crack after losing the first set (for which he received a warning) Nick did little wrong. But there were people on his back all the time and it needed some expert umpiring from the vastly experienced Mohamed Lahyani, who is Swedish in case you didn’t know, to keep things under control.

Even then, some idiot called “Out!” as Kyrgios, with the match on his racket, prepared to serve at 5-4, with the mini-break, in the final breaker. Exasperated, Kyrgios turned and mouthed “Shut the f.up!” He should have received a second warning for that but Lahyani was sympathetic. He knew just what Kyrgios had had to endure.

Sadly, the disruption did seem to have an affect and Kyrgios promptly double faulted. In a flash, Federer seized his chance and won an unforgettable duel with an unreturnable serve.

Federer, needless to say was impressed with the talent he had needed to quell and the difficulties he had faced. The closeness of the encounter could be spelled out by the length of the tie breaks – 11-9, 9-11, 7-5. A match of tiny margins.

Happily for American tennis, there were signs of home grown talent blossoming, too. Jack Sock, who has started the year in great form, reached the quarter finals before falling to Nadal while Jared Donaldson, whom Sock blitzed 6-2, 6-1 in the fourth round, had played impressively to beat the older Zverev, Mischa, 6-4, 6-4 in the second round and Britain’s powerful Kyle Edmund in the first.

And then there was Frances Tiafoe who found himself on Stadium Court facing Federer in round two. He went down 7-6, 6-3 but was not overawed. “I think he’s going to be really good,” said Federer. “I think he’s going to learn a lot from a match like this because playing on center court with a lot of people, under pressure, saving break points, making break point, playing breakers – that’s what it’s about and it should feed a player like him with a lot of energy moving forward.”

In all sorts of ways, tennis moved forward as well as standing still to preen itself in on Key Biscayne, Federer’s pavonine performances demanding the accolades he receives from his adoring fans.

And it was not all about the men. As I said in my piece at the start of the event, the women are at a “What Next?’ moment and that in itself is exciting.

I suggested no one knew who was going to win. But Johanna Konta had the belief that she could be the one and the British player trusted her instincts throughout the tournament, never wavering from her tactics of all out aggression. Her relentless power cracked the resistance of Simona Halep and Venus Williams before she outhit Caroline Wozniacki in the final.

It was Konta’s second WTA title and by far her biggest. All things are now possible for this demure, charming but fiercely competitive 26-year-old. Wimbledon awaits.