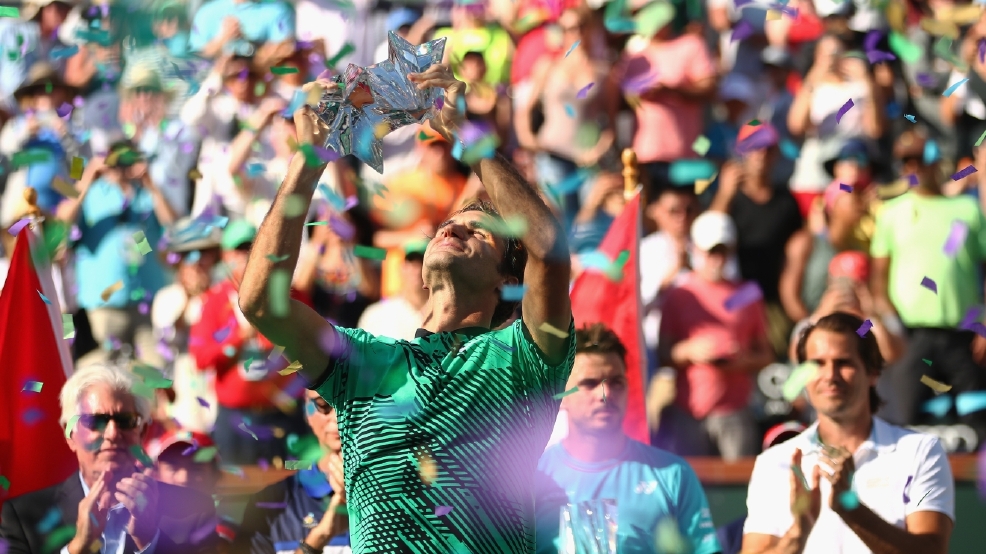 Against considerable odds, Roger Federer has suddenly become the man to beat. The year began with Andy Murray established as world No 1; Novak Djokovic looking as if he could mount a serious challenge; Rafa Nadal poised to continue the improvement in form he showed in the latter half of 2016 and Juan Martin del Potro determined to make a real impact on the ATP tour after his heroics in Davis Cup and the Rio Olympics.

Now we know. Following his victory over Nadal in the final of the Australian Open, he has just added his 20th ATP Tour 1000 title to his list of career triumphs – a career that, incredibly, seems to be picking up speed at the age of 35 rather than slowing down.

And I use the word speed in every sense. He won Indian Wells at a gallop. He was not only fast on his feet and fast with his arm but there was no time wasted between points. In the final, he defeated his old pal Stan Wawrinka 6-4, 7-5 in 1 hr 20 mins.

If you had blinked, you might have missed his astonishing dismissal of Nadal in the quarter finals. It took him just 68 minutes, winning 6-2, 6-3.

And what of rivals? Nadal was beaten in the desert by the only player who looked as multi-talented as Federer, Nick Kyrgios. Unhappily the young Australian went down with a bug on the eve of meeting the former world No 1 and disappointed the entire tennis world by not being able to play. It could have been a heck of a match – and will be when, as seems almost inevitable, they meet again.

As for Murray and Djokovic – both are injured and have pulled out of the Miami Open, a major disappointment for Florida tennis fans. Del Potro, whose 2017 is still a work in progress after missing the Australian Open, could excite the hordes of Latin Americans who visit Key Biscayne if his game steps up a notch and Nadal will not be short of support, either.

But all eyes will be on Federer. Is this man real? If you watch him in close up, you wonder. The way he carries himself through a life that is anything but easy, is testament, not merely to his skill on a tennis court, but to his comportment and temperament.

After he crushed Nadal, he went through his customary ritual of answering press conference questions in three languages – English, French and Swiss German, first for the written press and then for radio and television.

Then he was told that Landon Donovan, America’s great soccer star, was in the players’ lounge and would like to say hello. So Roger met with Donovan and his family, having the inevitable photos taken and then engaging Landon in a long chat about European soccer and the teams he had played for – Everton in England and Bayern Munich. Federer is a huge Basle FC fan and had often watched Donovan play. Instead of a quick “Hello, nice to meet you” , the conversation lasted over a quarter of an hour.

I had arranged to meet with Federer for an article I am writing for the Wimbledon program and, once he had said goodbye to Donovan and his wife, he switched his focus to me, looking me in the eye and talking about the subject in question with total recall and concentration.

When we had finished, we watched the end of Wawrinka’s victory over Dominik Thiem on TV and chatted a bit about the demands of the media on players. Most of my colleagues agree that Federer is exceptionally courteous and patient in the way he answers every question on merit, often putting nervous young reporters at ease with the tone of his reply.

He suggested that it is something you get better at as the years go by although he admitted to have found himself struggling when he came off court in Dubai last month, having suffered a shock early round loss to Evgeny Donskoy, after leading 5-1 in the third set tie-break and missing three match points.

“I was taken straight from the court, straight into the press room and barely had time to gather my thoughts,” he told. “I had not expected to lose and was upset about it. I had to tell myself to calm down and try to sound coherent because, mentally, I was all over the place.”

By his standards, Federer did look a little flustered during the interview but basically he made sense and got it done. He always does. He treats media obligations as part of his job and, mostly, seems to enjoy them. Obviously it is more fun when you win and, suddenly, Federer has been doing a lot of that.

His entire family was with him at Indian Wells, including the two sets of twins and his Mom and Dad. By now, he is obviously used to being around kids but he broke new ground, as far as I can recall, in agreeing to do a press conference with a roomful of second graders from the Gerald R Ford Elementary School. Of course, he was great with them and appeared to enjoy the whole experience as much as they did.

Funny how the adult reporters have stopped asking him when he will retire. Who knows how long he can keep this up but all things are possible if he maintains the astonishing level to which he has elevated his game so far this year.

Rod Laver didn’t think he had seen him play better than he had against Nadal and the great Grand Slammer was not alone. Another Wimbledon – like Pete Sampras, he has already won seven – is now a real possibility.

In the meantime, the rest of the tour must come to terms with the fact that the guy way out front in 2017 – he has more than twice as many ranking points this year as Nadal in second place -- is a 35-year-old father of four who thinks life is for the living. Before ripping another backhand cross winner, Federer will be thinking “Catch me if you can!”