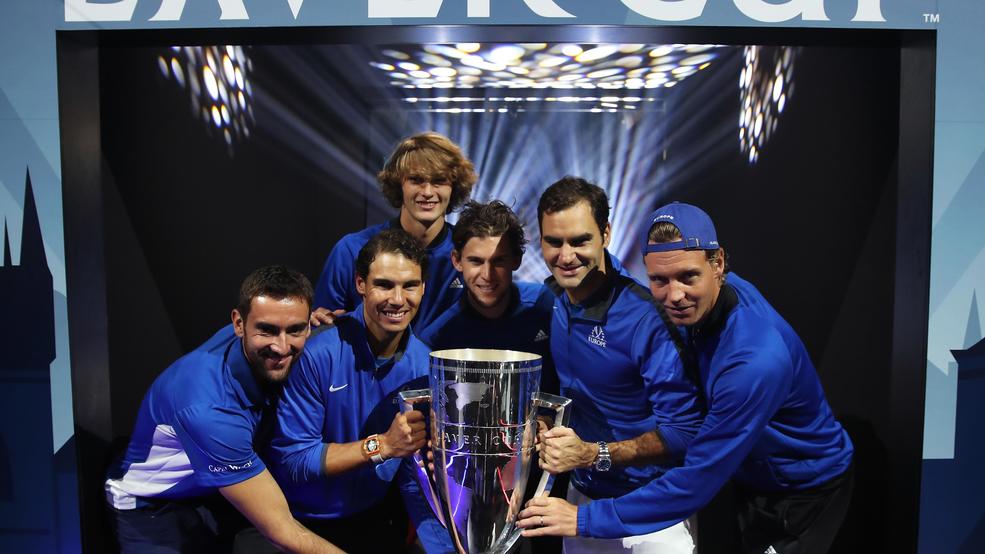 There was a touch of bewilderment about it. Joy, happiness, satisfaction, yes, all those things, too of course. But could anything go this right from the get-go; be this perfect straight out of the gate; rising to a crescendo for a magnificent climax in the city of Mozart; embracing new and old ideas; young and old players; history being recognized and history being made?

And so there was bewilderment. “It was way better than I ever thought it was going to be,” said Roger Federer after he had fought back from 5-8 in the Match Tie Break on Sunday evening in a desperate duel with one of the weekend’s heroes, Nick Kyrgios, to ensure that Europe would beat The World 15-9 in the first ever Laver Cup. Earlier in an upset that kept the World in the competition, John Isner had scored his first ever victory over Rafa Nadal 7-5, 7-6.

There are movies out there at the moment about real life tennis happenings on the pro tour but don’t bother sending this script in for approval. It would not be believed. Every aspect of the Laver Cup worked – the concept; the organization; the presentation, the huge attendance; the black court; the somewhat contrived scoring system which gave more credence to matches played on Sunday than on Friday and above all the most unpredictable factor, the tennis.

You did not need much research to come to the conclusion that Europe started out heavy favorites. Rafa Nadal and Roger Federer, who shared this year’s four Grand Slams between them, headed the Europe team while Sam Querrey and John Isner were the two highest ranked players for The World. But that scoring system kept things alive and, even though Europe had a 7-1 lead at one stage, all the matches had been close – for the first two days virtually every set ended in a tie break – and, had Kyrgios been able to grab two more points in that Match Tie Break, the Cup would have been decided by a doubles. But Federer, feeling afterwards as if he had won one of the biggest matches of his life, proved what a champion he is by closing it out 11-9.

So the Laver Cup proved many things, one of them being that there can always be something new under the sun – or at least under the roof a vast 16,000 seat arena. But for me it proved something important. It proved that the world’s best players can compete with great intensity with a smile on their face. The players enjoyed every minute of it and had enormous fun.

Judging from the Tweets I received over the first couple of days, people who are inclined towards cynicism were convinced that this was just another money-laden exhibition that was pretending to be something it wasn’t. “The players don’t care,” they said. “What’s the point of all this? The event has no tradition. It means nothing.”

No tradition? No, that’s true. In 1900 the Davis Cup didn’t have much tradition, either. Does it need to be said that you have to start somewhere?

And it wouldn’t last, they said. It was being carried by Federer and Nadal. After them, it would die. Because there would be no super stars, right? Just as there would be no superstars after Laver and Ken Rosewall; Bjorn Borg and John McEnroe; Boris Becker and Stefan Edberg; Peter Sampras and Andre Agassi. Nobody could possibly follow them, right? The game would wither on the vine.

I have heard the refrain so many times. Now I just smile, especially on this occasion because the game’s future was sitting on the bench. Headed by Nick Kyrgios, the next generation is pawing the ground, just waiting to be sent off at full gallop to stardom. Sascha Zverev and Denis Shapovalov along with Thanasi Kokkinakis, who was first reserve for the World, are already challenging the established order and will start a new dynasty for the men’s game in the very near future.

Most of the doubters, it must be said, were not present. If they had been, it would have been impossible for them not be caught up by something as ephemeral as a feeling; a feeling that this was something special. Just an exhibition? No, no, something far more than that. There was this little red-headed Australian whose exploits were thrown up on the huge screens during the brilliant presentation ceremony, harking back in action clips and newspaper headlines to the 1960’s, being honored by the greatest players of today.

“We are here to honor Rod Laver and his generation and thank them for the path that led to where we are today,” said Federer whose idolization of the great Australian was the prime motivating factor behind the entire concept.

But how committed were the players to giving their very best? One hundred percent. Anyone who has been around champions knows that, if there is one thing they hate more than losing, it is losing in front of a bench load of their peers. Does anyone seriously think Dominic Thiem was not going to bust a gut with Bjorn Borg sitting on the bench as his captain and Federer and Nadal urging him on?

Or that John Isner was not going care if his first serve went in with John McEnroe in his face? Are you kidding? And anyway, no true competitor could fail to respond to the riotous, college style support they received from the World team whose wild antics became part of the show.

Both McEnroe, who had his brother Patrick as Vice-Captain, and Federer were taken aback by how quickly the two teams bonded. “I was surprised,” said McEnroe. “We all got along so well and the support was amazing.”

Right from the start, the two teams – Europe in blue and the World in red – sat on their respective benches and stayed there. There were no rules to say they had to. “I was like, that would be a dream scenario but if you want to hang out in the back or stay at the hotel, you can,” said Federer. “And everybody was, like ‘of course we stay. We’re a team, we support each other.’ That, to me, was a wonderful surprise, how everybody was willing to give their last shirt to the event.”

And there was nothing fake about it. Federer readily admitted after he and Nadal had played doubles together for the first – and possibly the last time – that they would go back to being rivals right after the event was over. But their support for each other over the weekend was total. The sight of Nadal, as fierce as he ever was on court, yelling encouragement at Federer, pointing, gesticulating, during the final match, was something to savor.

Earlier, Federer had addressed the commitment level of the players by saying, when you see a bunch of players like we have on the bench, yelling “Next point! Get the next point!”, you better move your ass. And they did, all of them, all the time. There was not one match when a player gave the impression he was not trying his hardest and the plethora of tie breaks offered evidence of just how tight the competition was.

The most disappointed man at the end was Nick Kyrgios. For the second week in a row, the much-misunderstood Aussie had given his all for a team and lost. He had won first singles rubber and lost his second for Australia against Belgium in the Davis Cup the week before and now ultimate triumph had slipped from his grasp against Europe.

But, in winning his singles against home town boy Tomas Berdych and partnering with his pal Jack Sock to victory in the doubles, Kyrgios had not only played some brilliant tennis but had done so with a smile on his face. And much of it had to do with the advice he was getting. Some tough tactical talk from his captain and more jocular support from Sock and other members of the World team. It was the perfect combination for this complex character and he responded.

Of John McEnroe, Kyrgios had this to say: “It’s been awesome. I asked him, ‘Why do you play?’ He said, ‘You know, it’s the same reason you play. It’s because we are better at it than everything else we do. I think he understands me. It’s pretty refreshing having someone that actually understands where I’m coming from.”

Kyrgios travels alone on the tour. If only he could persuade McEnroe to travel with him.

There are chapters to be written about the Laver Cup and they should include recognition of the people and partners who put it all together – Tony Godsick, Federer’s agent who acted on Roger’s original suggestion, Tennis Australia whose big team worked the nuts and bolts of the event, the USTA, Brazilian billionaire Jorge Paulo Leman who used to play a bit of tennis himself and the driving force that is Managing Director Steve Zacks. They made it happen and barely put a foot wrong.

After being drenched in champagne, Federer re-appeared in the press conference room to offer a few final thoughts. He said he wanted all the players to become better players after this experience. He talked of the intense time they had spent together; talking tactics, examining everyone’s game, learning, thinking.

“I hope, not just the young players, but all of us, take something from this and, when we get back to the ATP tour where we belong, we are able to benefit from the experience. That is my hope.”

We will know more by the time the second edition of the Laver Cup takes place in Chicago a year from now. Perhaps not co-incidentally, it is Katrina Adams’ home town and the USTA President is not short of connections in the city. Katrina was in Prague and has seen how high the bar has been set. Over to you Chicago. Let it be the Laver Cup’s kind of town. Just as Prague was.