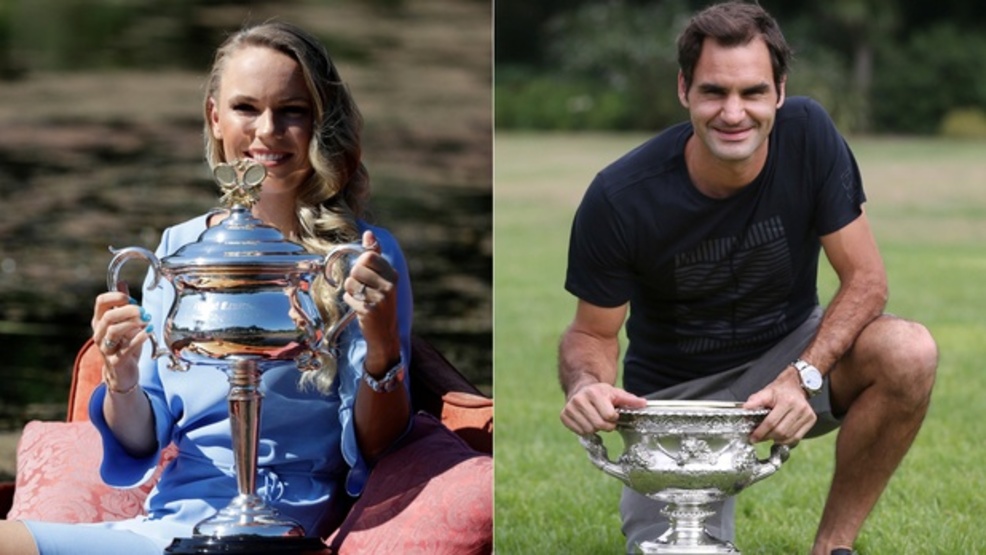 Richard Evans: The 2018 Australian Open - A Last Look at the First Major

When we left Rod Laver Arena after midnight, there was a huge, three-quarter moon hanging right over the skyscrapers of downtown Melbourne. One half expected to see Roger Federer’s face on it.

But he is not a three quarter sort of guy. What we had seen from the Swiss maestro throughout two weeks of fascinating tennis at the Australian Open was as close to 100% perfection as you are going to get from anyone playing through a grueling Grand Slam. And at 36? When will it end? He doesn’t know and, if he wasn’t always being asked the question, he probably wouldn’t bother about it too much—not when he can still float across the surface of his sport with such thrilling ease.

Until the final, he hadn’t lost a set. Unlike the Wimbledon final when he was suffering from blisters, a fit Marin Cilic was too good not to push him all the way this time, but Federer still knew where the finish line was and went for it with a dazzling dash to victory by 6-2, 6-7, 6-3, 3-6, 6-1. Having served really poorly in the fourth, it was amazing how quickly he was able to regain total dominance after a tight first game.

The match was played, somewhat controversially, under the roof. The enclosed arena only served to make the screams of delight that greeted the Federer victory all the more ear-splitting. I have heard a lot of crowds pay noisy homage to their heroes over the years but this was special—a knowledgeable tennis audience offering a true master of his craft a sustained, heart felt accolade for producing yet another of those elegant displays by which he makes tennis a thing of beauty.

It was of course, his 20th Grand Slam singles title, now four more than Rafa Nadal, his nearest challenger in the men’s game, and his 30th appearance in a final. A year ago, when he returned from six months off to allow a back problem to settle, he won the title against all odds and expectations, including his own, and we thought it would stand as a great final hurrah. But then came Wimbledon and now this—three Slam titles out of five. It’s a long hurrah and, as John McEnroe was telling me as we waited for our bags at LAX, there is absolutely no reason, fitness permitting, that he shouldn’t add another Wimbledon.

“He could do well at the French, too,” said McEnroe, “But I don’t think he’ll play. His schedule worked well for him last year.”

So, in the early hours of Monday morning, as the record crowds for a tournament that just keeps on getting bigger and better, filed away well satisfied with the outcome, the talk was all about the man whose feats and demeanor are beginning to get a little surreal.

But, in fact, this Australian Open was not just about Federer. It was about new faces emerging in the men’s game and more established stars on the women’s side producing the most compelling contests during two weeks of fluctuating weather that produced two brief spells of searing heat.

Federer may have 20 titles but Caroline Wozniacki is now just so overwhelmingly happy to have got her hands on one that it was great to see. After a final that reached 4-4 in the final set with no one daring to predict the outcome, so close had her duel with a gallant, hurting Simona Halep been, Wozniacki produced strokes of dazzling quality during the last two points of the match to close out a marathon battle 7-6, 3-6, 6-4. It is her 11th year on the WTA tour and 67 weeks had been spent at No. 1 during a great spell of consistency in 2010-2011, but a Slam title had always eluded her until now.

Her reaction was one of relief as much as anything. “Now there will be no more questions about having been No. 1 without winning a Grand Slam title,” she grinned. “It’s very special. I’m just so happy.”

So was her great, absent friend Serena Williams, who tweeted congratulations within minutes. And she was not alone. Knowing how hard she has tried, knowing how hard she and her Polish-born father had worked to go on improving her game—especially the serve and the forehand—it was a story that warmed the hearts of sports fans everywhere.

The defeat was a bitter pill for Halep, who relinquished the No. 1 ranking to Wozniacki with this defeat and ended up in hospital in need of re-hydration after a string of tough matches that saw her edge past America’s Lauren Davis, 4-6, 6-4, 15-13, and then a rejuvenated Angelique Kerber in the semifinal, 6-3, 4-6, 9-7. The effort left the Romanian with ruined feet and a damaged ankle and she will need time to recover.

The women’s draw produced so many thrills and so many tight matches that a point here or there could have produced a totally different outcome. Wozniacki had been two match points down and 1-5 in the third set against Croatia’s little known Jana Fett in the second round, before pulling off one of the greatest Houdini acts we have seen in years.

Elina Svitolina, the No. 4 seed from the Ukraine, was considered a good tip for the title going into the second week, but a new face broke through in the form of Belgium’s unseeded Elise Mertens. She crushed Svitolina 6-4, 6-0 in the quarters before losing 6-3, 7-6 to Wozniacki.

On the men’s side, the quarterfinals produced a real mix of old and new. A groin strain which left him barely able to walk, forced Nadal to retire at 2-0 down in the fifth against Cilic towards the end of a mighty battle that had seen the Croat recover after losing the first set. In the bottom half of the draw, Federer resumed an old rivalry with Tomas Berdych. The Czech has scored some notable victories over Federer in the past, at Wimbledon and in the Olympics, but Roger swept through the first-set breaker 7-1 and then cleaned it up by a score of 7-6, 6-3, 6-4.

The other two quarterfinals had a very different look. Britain’s 23 year-old Kyle Edmund had upset US Open finalist Kevin Anderson in the first round after trailing by two sets to one and proceeded to build on that achievement by dispatching Denis Istomin—who had upset Novak Djokovic here last year—in straight sets. He then revealed his guts and endurance for a second time with another comeback from two sets to one down against Georgia’s Nikoloz Basilashvili. This time, Edmund had to uncork his power-packed forehand to dig himself out of 0-2 in the fifth, but he kept his nerve in a thrilling duel to take that final set 7-5. The veteran Italian Andreas Seppi, who has played some of his best tennis in Melbourne, found the young Yorkshireman too powerful after winning the first set and went down in four, which left Kyle to face Grigor Dimitrov in the last eight.

Few expected Edmund to beat the winner of the ATP Finals in London the previous November, but Edmund moved up a gear and simply outhit the Bulgarian 6-4, 3-6, 6-3, 6-4. The solid, unfussy way in which Edmund goes about his business suggests Britain has a new star capable of easing the pain of Andy Murray’s absence and he might have done even better than lose 6-2, 7-6, 6-2 to Cilic had he not damaged his hip midway through. Hopefully, it is not serious, but the fact remains that Britain’s top three players—Murray, Edmund and Johanna Konta are all suffering from hip problems.

Hyeon Chung had announced himself with a dominating performance at the NextGen Championships in Milan at the end of last year and the heavily-muscled South Korean produced two of the biggest upsets of the tournament in back-to-back rounds. First he ousted disappointing No. 4 Sascha Zverev 6-0 in the fifth in the third round and then ending Novak Djokovic’s hopes of a triumphant return to Melbourne Park, outhitting the Serb to win 7-6, 7-5, 7-6 in a bruising slugfest that left Novak totally confounded by Chung’s ability to match him blow for blow.

Although the damaged elbow managed to hold up, it was clear Novak’s body was letting him down by the end and this setback will give Andre Agassi much to ponder as the pair continue to work together through the year.

Unhappily, the injury curse struck Chung in his semifinal against Federer and he was forced to quit at 6-1, 5-2 down. So one quarterfinal and both semifinals had been heavily affected by injury. The intensity and physicality today’s players bring to the court—particularly to hard courts—is simply more than the body can stand. How much more evidence do we need?

There was another new name to emerge from virtually nowhere and claim a quarterfinal place. Tennys Sandgren from Tennessee had defeated an unfit Stan Wawrinka in straight sets in the second round and had pushed on from there with some powerful attacking tennis. Much was made, of course, of Sandgren’s apt first name, but soon a darker topic emerged when some of his tweets were scrutinized. It appeared that he was following alt-right politics in some detail and although he quickly erased all his tweets for the past two years after a difficult press conference, he could not prevent what appeared to be a cruel remark about Serena Williams resurfacing.

It was a sad distraction because Sandgren produced a brilliant performance, encompassing both skill and endurance, in beating No. 5 Dominic Thiem 6-3 in the fifth to reach the quarters. Hardly surprising for someone not used to these heights, Sandgren seemed a little fatigued against Chung and lost 6-4, 7-6, 6-3.

Across the board, there were stories everywhere at Melbourne Park this year and if one is looking for a winner among nations, the prize has to go to Croatia. Apart from Jana Fett’s terrific effort against Wozniacki, Mate Pavic won the men’s doubles with Oliver Marach and gave Croatia a second title by winning the mixed doubles with Canada’s Gabriela Dabrowski. Then there was Cilic in the men’s final with the champion coached by yet another Croat, Ivan Ljubicic. Impressive.