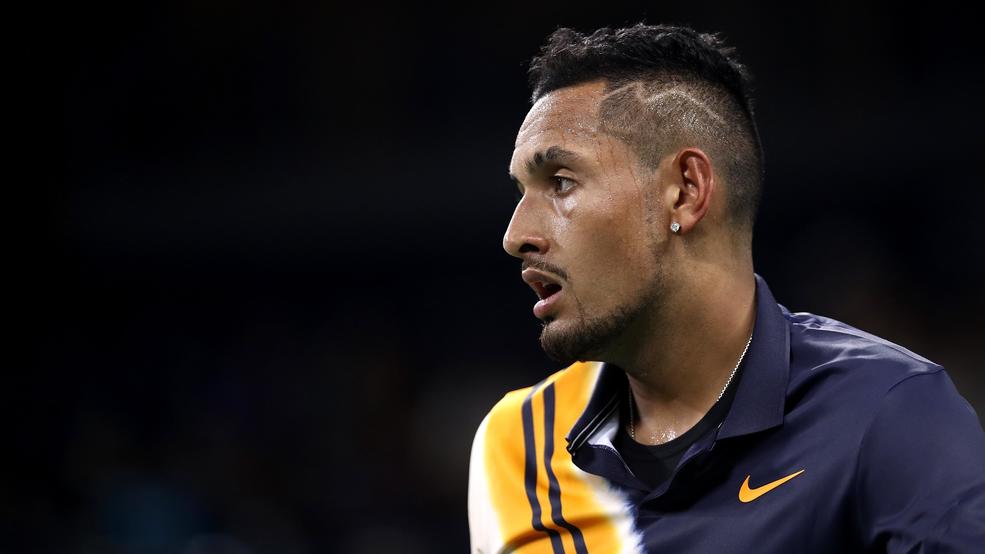 Richard Evans: The Word of Nick - Getting to Know Kyrgios, and Others, off the Court

NEW YORK—From the point of view of those of us who write about the sport, few things for a tennis writer are more riveting that watching players grow, mature and learn how to how articulate their feelings.

Nick Kyrgios provided a classic example at the US Open after his victory over Pierre-Hugues Herbert. Everything, of course, centered around the incident when Mohamed Lahyani got down from his chair at a change over and told Kyrgios to get his act together, because the Australian looked dead on his feet and didn’t seem to be trying.

All the early questions focused on that and one might have expected some gruff, even rude answers from a young player who has not always found the limelight easy to handle. But this was different. The fact that he had won 6-0 in the fourth set probably helped, but Kyrgios, while not holding back, mostly answered with a smile on his face.

Asked if the umpire encouraged him, Kyrgios replied, “I’m not sure it was encouragement. He said he liked me. I’m not sure if that was encouragement. He just said it was not a good look. I wasn’t feeling good. I know what I was doing out there wasn’t good. I wasn’t really listening to him but I knew it wasn’t a good look. It didn’t help me at all. Like, I was 2-5. If it had been 0-3 and maybe if I would have come back and won six games in a row, fair enough.”

Later, as he was pressed on the subject, Kyrgios was grinning when he said, “It’s ridiculous. He wasn’t coaching me at all. I mean, like, I don’t have a coach.. I haven’t had a coach for years. Of course he wasn’t coaching me. Like, what are you talking about?”

Everyone was having fun by that time because Nick was refusing to get riled up. His answers are often sprinkled with sarcasm, and he was poking fun at himself as he got up out his chair to leave, answering a question about his greatest strengths as he went. “My unbelievable movement, my returns and my mental strength. Slice.”

And he was gone. There is no guarantee that he will be like this if he loses or even, on another occasion, if he wins. Predictability is not what Kyrgios is about. But the same could be said for Serena Williams. We have got to know all the Serenas over the years. The surly Serena; the monosyllabic Serena; the expansive laughing and funny Serena. All this depending on her mood. Not so her sister, Venus—a very private person and her careful, structured answers have one thing in common: brevity. The WTA, for whom she became a spokesperson in the fight for equal prize money, will talk of a very different personality but, in press conference, we don’t get that.

So let’s try and examine what it must be like for a player to have to walk into a roomful of reporters half an hour after having sweated your guts out for two, three, four hours on court. Especially when you have lost and, often are speaking in your second language. I often wonder what some high-powered, middle-aged CEO’s would do if they had to walk out of a tough meeting in which they had just cost the company millions with a wrong decision. “Yes, I really should have gone for the other option.” It would be said through gritted teeth.

Not many would be able to handle it with the aplomb that many tennis players do. It is almost irrelevant to put Roger Federer forward as an example of how it should be done because few could match his equanimity and savoir faire. I use a French phrase advisedly because Federer does all his press conferences three times over—in English, French and Swiss German. I takes a long time and he almost never gets fussed. Every question, no matter how daft, is answered with respect.

And he understands perfectly why he is endlessly asked when will he retire. After beating Benoit Paire in the second round, this was the answer we got. “Well, it’s been nine years. In the beginning, you’re like ‘What?’ It can’t be true. Eventually, OK, fine I get it. They’re allowed to ask it.because that could be the one in that very moment to reveal that this might be it. The journalists have to do their job..The thing I can tell you guys, I will not tell it to one journalist in that one moment.”

He gets it. He understands the other person’s needs. But he is Roger Federer. Others find it more difficult. One can go all the way back to Jimmy Connors who had been brought up with such a focus on winning that it seemed as if the words ‘lose’ and ‘defeat’ had been eradicated from his dictionary by his fiercely competitive mother.

So when Connors did lose, he had no idea how to handle it. I remember one such occasion at Forest Hills when he was still quite young. Paraphrasing from memory, he said something like, “I don’t have to play tennis you know. I don’t have to play. I could do something else. like.like”

Connors got better as most of them do. Ironically, John McEnroe never had a problem with press conferences. He used them as his psychiatrist’s couch, and he should have paid us for the sessions. Once, after playing a really poor match in the ATP Finals at Madison Square Garden, he headed for the press room as we all sharpened our pencils—yes, we still used them then—eager to ask some tough questions. But before we could open our mouths, McEnroe unleashed this self-directed salvo: “If I play another match as badly as that I have no right to call myself a professional tennis player.”

Where do you go from there? Well, you plough on, trying to think up ways of getting the more reluctant players to reveal something of themselves and, as the years pass, they do, especially as their English improves. Rafael Nadal struggled to start with but he can express himself well now, despite a few grammatical blips. Like everything he does, he has worked at it. Rafa got to grips with the English language about the same time he got to grips with grass.

Novak Djokovic, a natural linguist, is near perfect in English and is another player who takes every question on its merits and shows great patience. Andy Murray got burned at a very young age when he made a flip remark about not wanting England to win a soccer match. Ridiculously, the English tabloid press, refusing to acknowledge Andy’s very dry Scottish sense of humor, never let him forget it and, as a result, he has remained guarded ever since, rarely allowing us to see how funny he can be.

It is not easy, this business of being grilled after every match but tennis fans should be happy that the rules demand that the players have to put themselves through it or get fined $1,000. Occasionally, they think it’s worth it and disappear into the night. But that is rare and, as we pose the questions, we get to know them better.