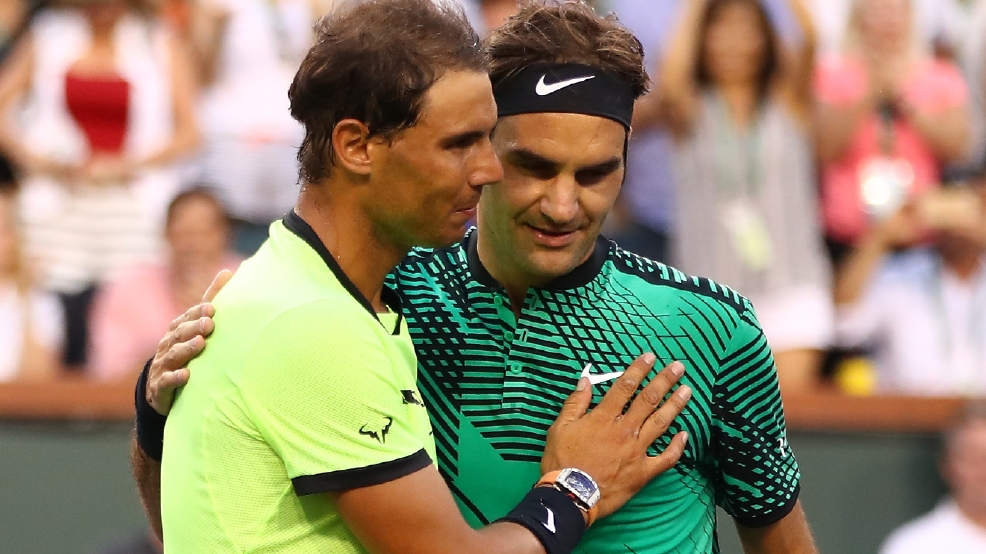 INDIAN WELLS, CA - MARCH 15: Roger Federer of Switzerland shakes hands at the net after his straight sets victory against Rafael Nadal of Spain in their fourth round match during day ten of the BNP Paribas Open at Indian Wells Tennis Garden on March 15, 2017 in Indian Wells, California. (Photo by Clive Brunskill/Getty Images)

Students of tennis history were well aware that Roger Federer had never toppled his renowned rival Rafael Nadal three times in a row since their illustrious rivalry commenced back in 2004. They knew that Nadal owned a 23-12 career lead in his career series with the Swiss. They recognized that always Nadal had presented Federer with a baffling set of tactical and strategic issues that he had never confronted against any other player. They realized that no one but Nadal had made Federer feel so vulnerable across the years.

But now these two towering champions have arrived at another stage of their gripping rivalry. Federer had ousted Nadal in the final of Basel during the autumn of 2015 indoors, surprising few observers with that triumph. They did not meet again until the final of the Australian Open in late January of this year, when Federer rallied gallantly from 1-3 down in the fifth set to eclipse the Spaniard with a run of five consecutive games, claiming his 18th major in the process, preventing Nadal from securing a 15th Grand Slam title. But many close followers of the game believed that Nadal would resume his winning ways this time against the Swiss Maestro on the slower hard courts at the BNP Paribas Open in Indian Wells, California. He has been a singularly resilient competitor over the years, and a good many authorities believed he would not be haunted by his devastating defeat in Melbourne. The prevailing view was that the Spaniard would impose his game much more effectively in California than he did in Australia, and remind Federer why he has always held the upper hand in their head to head showdowns.

That was simply not the case. Federer performed prodigiously in their latest contest, and he comprehensively dissected Nadal 6-2, 6-3 in their round of 16 appointment. Federer set the tempo, returned brilliantly off the backhand, refused to let Nadal settle into the rallies, and left the dynamic Spaniard more befuddled on a tennis court than I have seen him look in a good long while. This was a far more convincing triumph for Federer than the one he recorded in Australia. There were no rough patches. His ball striking was relentlessly pure, precise and clean. He did not have one of his great serving matches, connecting with only 56% of his first deliveries, releasing only five aces.

But Federer's second serve was perhaps better than I have ever seen it against his old adversary. He won 76% of his first serve points, and that was unremarkable when measured against his customary standards. Much more impressive was the the fact that Federer won 15 of 20 second serve points (75%). He had Nadal consistently off balance and kept him regularly off guard. His deep kicker in the ad court was pulling Nadal uncomfortably far off the court and drawing errors. Across the two quick sets which lasted a combined 68 minutes, Federer faced only one break point. The quality of his topspin backhand on the return and during the rallies was breathtaking. To be sure, Federer could not be faulted for this scintillating display; it must rank right up there among the finest demonstrations he has ever put on in a best of three set skirmish against the Spaniard.

Sadly, however, Nadal did not keep up his end of the bargain, and that may be understating the case. He tried to move his serve around in both the deuce and ad courts to keep Federer guessing, but in the process Nadal seemed to confuse himself. In my view he would have been better off had he picked away more persistently at Federer's backhand return. What Nadal needed was better location, more accuracy, and heavier slice to nullify (at least to some degree) Federer's golden backhand returns. Had Nadal sent his first deliveries closer to the lines with more spin, he might not have found himself under such a constant stream of pressure. Federer was always pouncing and prodding, while Nadal did not execute nearly as well as he needed to do.

Moreover, Nadal was muddled in his mind from the backcourt. He played into Federer's hands at times by slugging instead of employing his heavier brand of topspin off the forehand. He did not return with any true conviction. He pressed off the backhand. His court sense has long been a strong suit but not so on this occasion. He kept fighting and tried to spur himself on, but his heart wasn't fully in it because he was rushed into submission by a man at the height of his current powers. Federer deserves full marks for so fluidly taking Nadal apart; in the process he made the Spaniard feel like a much lesser player than he is.

The first two games of this encounter may have been the most critical of the entire match, particularly from the standpoint of Nadal. A second serve ace out wide to the Federer forehand in the deuce court gave Nadal a 40-30 lead in the opening game, but he then netted a backhand off a deep ball. On such an important point, that error was not justifiable. Nadal soon earned a second game point, but Federer's penetrating backhand return hurried Nadal into a forehand error long. Nadal miss-hit a forehand wide at deuce and followed an even more glaring miss-hit forehand long. That string of mistakes was costly. A sprightly Federer had the immediate break, and he was off and running.

Nadal, however, reached 0-30 in the second game, but Federer aced him down the T and then stymied Nadal with the wide kicker in the ad court. Nadal managed to win the next exchange to garner his lone break point of the showdown, but Federer erased it majestically with a service winner down the T as Nadal could not make the stretch backhand return. Federer then put away a high backhand volley and laced a backhand down the line for a winner. It was 2-0 for the Swiss.

Nadal held at love in the third game but Federer answered by taking his serve at 15 for 3-1. Nadal was under siege again in the fifth game. At 30-30, Federer's backhand crosscourt opened up an avenue for a forehand winner behind the Spaniard. Nadal fought back to deuce but the southpaw's forehand faltered again on the next point. On his second break point, Federer unleashed a backhand return winner down the line. He had established a 4-1 lead. Although Federer double faulted to fall behind 0-30 in the sixth game, he took the next three points and eventually held on his second game point with a neatly executed first serve down the T that Nadal could not handle. Nadal held on at 15 in the seventh game, but Federer was flowing now, confidently moving forward at every opportunity. At 5-2, 40-15, he served-and-volleyed, pulling Nadal wide to the backhand, opening up the court beautifully for a forehand first volley winner. Set to Federer, 6-2.

Nadal knew full well that he was facing a top of the line Federer, who was far surpassing his Australian Open form against the Spaniard in terms of sustained excellence. Nadal held at love in the first game of the second set with an acutely angled slice serve wide for an ace, but Federer retaliated by holding at love for 1-1 with an ace out wide of his own. The Swiss sensed he was unstoppable by this stage. He broke Nadal in the third game with a vintage forehand inside out winner. Serving at 2-1, Federer aced Nadal for 40-15 and took the next point with a wide serve provoking an errant backhand return from the left-hander. Federer had built a 3-1 lead, and he was not looking back. A beleaguered Nadal held in a deuce game, but Federer was roaring. In the sixth game, he aced Nadal out wide for 40-0 and held at love to reach 4-2. Nadal held at love in the seventh game with an unwavering stand, but that was nothing more than a brief reprieve from an almost inevitable setback. Federer held at 30 for 5-3. Now Nadal was serving to stay in the match, and he was not up to that task.

After securing the first point, Nadal never won another. Federer implemented a superb backhand approach to set up a forehand volley winner down the line: 15-15. A deep forehand crosscourt from Federer coaxed Nadal into a backhand unforced error down the line into the net:15-30. Nadal went for a forehand down the line but his let-cord shot did not clear the net: 15-40. And then, almost fittingly after making so many first rate backhands over the course of the match, Federer sealed his first match point by coming over one last backhand return, sending it inside in for a winner into Nadal's vacant forehand corner.

And so the eagerly anticipated clash of the titans ended somewhat anticlimactically. Federer crushed Nadal at the cost of only five games across two sets. His exemplary performance carries Federer into an intriguing quarterfinal confrontation against the surging Nick Kyrgios, who upended world No. 2 Novak Djokovic for the second time in a row. Federer will be looking forward to that clash, as will the charismatic Australian who seems to relish every chance he has to compete against the sport's most accomplished performers.

But for the time being at least, Rafael Nadal will need to do some deep soul searching. His 2016 campaign has featured final round appearances in two of the four tournaments he has played. But the fact remains that he has lost twice this season and three consecutive times altogether against a formidable rival who seems to have finally figured out at 35 what is required to topple the commendable Spaniard. I hope I am wrong, but Nadal at 30 may have moved permanently past his prime. Conversely, regardless of what happens at Indian Wells from this juncture on, Roger Federer is revitalized. His enduring commitment to attaining more high honors is not only extraordinary but also evidence that Federer is a unique figure in the history of a game he cherishes.