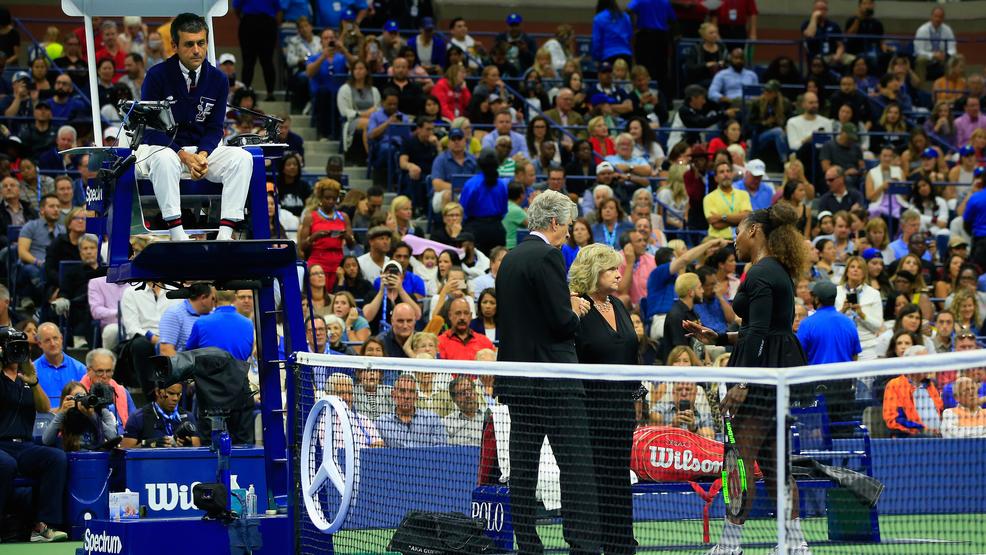 NEW YORK, NY - SEPTEMBER 08: Serena Williams of the United States talks with referee Brian Earley as umpire Carlos Ramos looks on during her Women's Singles finals match against Naomi Osaka of Japan on Day Thirteen of the 2018 US Open at the USTA Billie Jean King National Tennis Center on September 8, 2018 in the Flushing neighborhood of the Queens borough of New York City. (Photo by Chris Trotman/Getty Images for USTA)

Steve Flink: Carlos Ramos Was Correct—and a Consummate Professional at the Us Open

Lost in the swirl of controversy surrounding Serena Williams and her altercations with umpire Carlos Ramos during her final-round loss at the US Open to Naomi Osaka is this: despite the fact that Williams felt so aggrieved by the way Ramos applied the rules in penalizing her, he is an outstanding umpire. He was well within his rights to make hard decisions that did not meet with the approval of Serena or the multitude of fans who wanted so fervently to see her tie Margaret Court’s record of 24 major singles titles, as well as break a tie for the women’s US Open singles title record she shares with Chrissie Evert. Both Williams and Evert have garnered six crowns.

But Williams did not hit those historical targets. In my view, Ramos made the right calls in first issuing a warning to Williams when he observed her coach, Patrick Mouratoglou, sending signals to his player when Osaka was serving at 0-1, 40-15 in the second set; in later levying a point penalty when Serena smashed her racket on the court after losing her serve at 3-1 in the second set; and, finally, imposing a game penalty at 4-3 in that second set after Williams had verbally abused him at the changeover, calling him “a thief” and accusing him of stealing a point from her earlier.

That last infraction put Williams behind 5-3. The rest, of course, was history; Serena held her serve, and then Osaka served out the match magnificently in the 10th game, making a forehand down-the-line winner, releasing two service winners, producing one ace. Osaka was victorious 6-2, 6-4. She was very worthy of the title, and her level of play was considerably higher than Serena’s. In no way should her triumph have been diminished by the severity of the controversy.

And yet, sadly, unmistakably, and irrefutably, it was. That a major final could end on such an unharmonious note was terribly unfortunate. Osaka’s conduct was exemplary, and her tennis was often sublime. She was beating Williams to the punch, outhitting her from the baseline, moving with more alacrity, and out-serving the woman who is widely regarded as the best server ever in the women’s game.

We will never know if Osaka—without the benefit of the game penalty— would have closed out Serena from a set and a break up. But Osaka was plainly outplaying Williams across the board, and she had absolutely nothing to do with the events that unfolded which led to a loud chorus of boos all over Arthur Ashe Stadium from the vociferously supportive, almost entirely pro-Williams audience. And it must be said that the game penalty for 5-3 was one which Osaka would have served, and she was broken only once in the match. Moreover, her poise in serving out the match comfortably at 30 suggests that the match would have likely ended with the same score.

Unfortunately, though, the vast amount of lingering attention to the match has had little to do with Osaka and her inspiring performance. Instead, the television networks have featured mainly ardent boosters of Williams blaming the umpire for what happened, rather than examining Williams’ actions.

The way I saw it, that was deeply regrettable.

Court Report—ITF and WTA issue statements on Serena-Ramos controversy at US Open:

Serena released her ire at Ramos after the coaching warning, saying, “One thing I’ve never done is cheat, ever. If he [Mouratoglou] gives me a thumbs up, he’s telling me to ‘Come On!’...I don’t cheat to win. I’d rather lose. I’m just letting you know.”

But she did not know that Mouratoglou would later inform the press that he had, in fact, tried to coach Williams. His excuse was that others do it, that Osaka’s coach does it, and that Ramos did not penalize or warn Rafael Nadal when he umpired the Spaniard’s matches and Rafa was getting coaching from Uncle Toni.

Mouratoglou would never send signals that Williams did not understand, and the notion that he was merely imploring her to “Come On” is not credible. And this is a crucial part of the overview of the entire incident, because the coaching warning led to a point for the smashed racket and a game for verbally abusing Ramos. Even in her press conference, Williams was maintaining her point that she does not “cheat” with coaching during matches. But Mouratoglou made it clear that he does send her signals, justifying it on the grounds that the practice is widespread. So that calls her integrity on this matter into question.

In my view, Ramos was doing his job, and has been one of the best in the business as a chair umpire for a long time. Those that turn this imbroglio into a matter of sexism are forgetting that John McEnroe, Jimmy Connors and Andre Agassi were all disqualified from matches in their careers. Some point out cases where those very same players got away with unacceptable behavior in other instances when they competed at the majors, and that is true.

But so, too, has Serena. Sometimes umpires are reluctant to start or finish the process of applying penalties. But the fact remains that today’s leading players among the men have largely conducted themselves impeccably. CNN pointed to an example from 2009 when Roger Federer cursed at the umpire, and that is true. He did that during his final-round loss to Juan Martin del Potro at the US Open. But that was a rare moment for Federer, and he did not carry on afterwards. A day later, he was fined.

When Nadal is warned for coaching, or for going over the 25-second time limit between points, he is totally professional and he does not abuse the officials. When Novak Djokovic vents, it is almost always at himself or his entourage in the corner. He has smashed rackets many times and been warned, and understands the admonitions and the ramifications. Moreover, during the US Open final against Del Potro, Djokovic received a warning for taking too much time between points, and he did not blink an eye.

I believe umpires have been lenient with top players including Serena at times, but the fact remains that the top men these days have all been outstanding sportsmen and they know when to stop. It is no accident that they have avoided drifting near the edge of disqualification. They have recognized when it is time to simply allow the umpire to do his job. There were times when Andy Roddick would badger the umpires at changeovers, and he was fined for going too far in some cases. I have heard from people in authority that Roddick was a total professional about accepting the fines, realizing that he deserved the financial penalties.

In any case, as I was preparing to write this piece, I received an email from Marshall Happer, who served for nine years as Administrator of the Men’s Tennis Council before it disbanded at the end of 1989. No one knows more about the rules of officiating than Happer, or how they should be applied. Happer wrote a letter to Ramos that he shared with me, and he was adamant that Ramos had handled the rules just the way he should have in the Williams-Osaka clash.

As Happer wrote to Ramos, “We have never met, but I just wanted to tell you that in my opinion, your rulings in the women’s US Open final were absolutely correct. As a matter of fact, as a good professional chair umpire, you were actually required to make those rulings, no matter who the player involved was. It is hard to believe that Serena Williams, a Grand Slam champion, and her coach, Patrick Mouratoglou, in a $3+ million match, either did not know the rules, or that they just decided the rules would never be enforced, so they could be violated.”

Happer pointed out that the three rules Serena violated were in the Code of Conduct of the Men’s Tennis Council and have been “applicable to players for more than 30 years.” And then he cites the three rules with specificity. Article V. M states clearly that players “shall not receive coaching during a tournament match. Communications of any kind, audible or visible, between a player and a coach, shall be construed as coaching.” It is then clarified in that Article that if there is a violation during a match of that rule, “the player shall be penalized in accordance with the Point Penalty Schedule.”

He then turns to Article V. P. It states, “Abuse of racquets or equipment is defined as intentionally and violently destroying or damaging racquets of equipment.” The penalty for a violation here is also done in accordance with the Point Penalty Schedule.

Finally, Happer turns to Article V. Q: “Players shall not at any time verbally abuse any official, opponent, spectator or other person within the precincts of the tournament site. If such violation occurs during a match, the player shall be penalized in accordance with the Point Penalty Schedule.”

He writes to Ramos, “The coach’s hand signals were evident to anyone who looked and those signals had to be agreed by both the coach and the player beforehand; otherwise they would have made no sense. His admission that he was, in fact, coaching is conclusive proof that he violated the rules that required the Code Violation you issued. His excuse that he did it all the time and up to now had never been caught—and that others did it—is without any merit. Probably, a lot of the time, if there is prohibited coaching, it is camouflaged, so the chair umpire does not see it. However, here [in the Williams-Osaka match] the obviously rehearsed signals were blatant and obvious.”

On the question of the point penalty Williams received for racket abuse, Happer writes, “The violent and angry destruction of a racquet by Serena was clearly another violation. During the 1980’s, we let players throw a racquet or two to let off steam, but we never permitted a player to violently and angrily destroy a racquet in the middle of the court.”

Finishing his summation for Ramos on the game penalty, Happer says, “For some unknown reason, Serena considered that her first two clear violations were ‘unfair’ and her demand that you apologize to her for issuing the violations that she committed, was without any merit. When she decided to call you a ‘thief”, it was obvious to me that she was intending to and did intentionally commit verbal abuse, for which she deserved the game penalty. You are not permitted to accept verbal abuse from a player.”

Happer then reminds Ramos that he is evaluated by the supervisor and the referee for every professional match in which he serves as a chair umpire.

He writes to Ramos, “In my opinion you were required to enforce the code, even against a great Grand Slam champion, just as you would have to do with any player, male or female. As a professional chair umpire, you did not have the right to enforce some rules while electing not to enforce others.”

Having said all of that, Happer reassured Ramos by addressing the many comments made in and among the media.