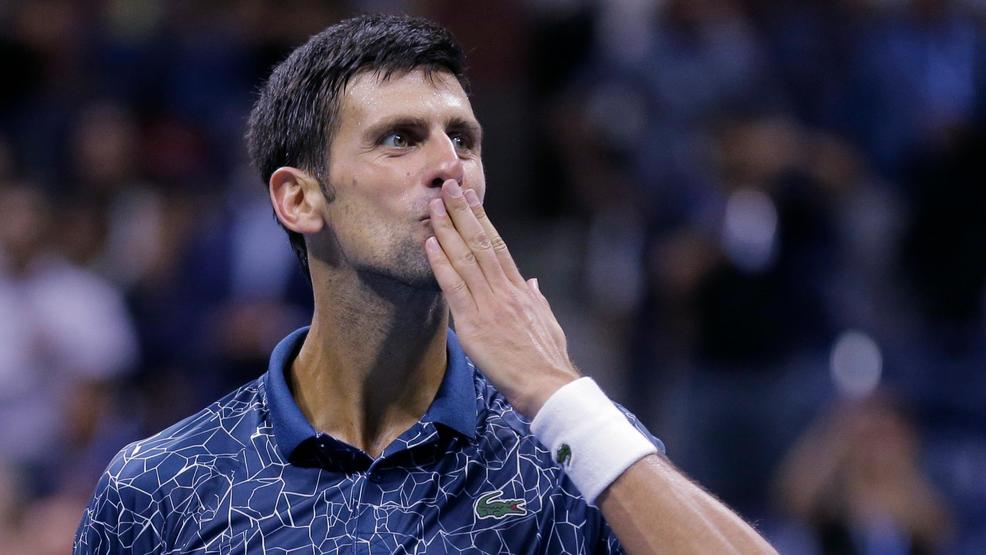 NEW YORK— A year ago, Novak Djokovic was unable to compete at the US Open. His ailing elbow and a damaged psyche had left him in a conflicted state of mind. He had spent the previous six years always at or on the edge of excellence, winning eleven majors in that sterling span, driving himself ceaselessly to perform at the uppermost levels of his game, seldom letting his guard down during that period. But he surely was deeply disconcerted about missing one of his favorite tournaments last year, and must have been wondering what it would take to rekindle his tennis and rise again to the heights he had reached so many times over the course of his twenties.

Now Djokovic is 31, and is on the cusp of an extraordinary achievement. In July, he came through to secure his fourth Wimbledon title on the lawns of the All England Club. That was the first major he had claimed since he became the first man since Rod Laver in 1969 to be victorious at four majors in a row. Djokovic had realized that magnificent feat at Roland Garros in 2016, taking the premier clay court prize in tennis for the first time.

Winning Wimbledon surely reminded Djokovic of who he is and what he can accomplish when his mind is clear, his ambitions deep and wide, and his body healthy. The Serbian has taken that triumph on the grass and has kept pressing forward, winning Cincinnati a few weeks ago to become the first man to collect all nine ATP Masters 1000 titles. And in Flushing Meadows, Djokovic has been a man possessed, determined to bring out the best in himself, fueled by being a confident fellow again, elated about the way he has turned this year and his entire career around over the last few months.

In fact, Djokovic now stands only one match away from winning the Wimbledon-US Open double for the third time in his career, following up on what he achieved in 2011 and 2015. Moreover, Djokovic could tie the one and only Pete Sampras with 14 majors if he manages to overcome the determined Juan Martin Del Potro in the final on Sunday. To say that there will be a large chunk of history on the line when they collide is to state the obvious, because Del Potro is going full force after his second career major title, and hoping to capture another US Open nine years after his stupendous run in 2009.

And so Del Potro will be highly charged and full of conviction when he walks on court to face Djokovic in a fascinating final round duel. This will be one of his largest dreams, to be back among the elite after his series of wrist surgeries, to demonstrate that he would deserve another Grand Slam title in his collection after enduring so many hard times and living through so much despondency across the years.

But Djokovic is the man we want to address right now, and his performance on Friday night in dissecting Kei Nishikori in straight sets was first rate across the board. Djokovic is peaking propitiously. He crushed the Japanese stylist 6-3, 6-4, 6-2, and essentially took Nishikori’s heart away by bearing down to hard from beginning to end that his opponent never really had a chance. Djokovic has won his last four matches in straight sets after dropping sets in his first two matches, but tonight’s conditions in Arthur Ashe Stadium were much more to his liking than anything he had experienced along the way.

It was cool. The humidity was nowhere near as stifling as it had been all week long. Djokovic was clearly feeling strong physically and his focus was clear and absolute. It did not help Nishikori that his career record against Djokovic was a dismal 2-14. It just happens to be an abysmal matchup for him, and the primary reason he beat Djokovic at the 2014 US Open in the same penultimate round was because it was one of those oppressive days when Djokovic is compromised more than most players. He was deeply diminished in that semifinal contest, and the heat was an even tougher opponent than a spirited Nishikori.

On Friday night, Djokovic came fully prepared to play. He burst out of the gates uncompromisingly and Nishikori never quite knew what hit him. From the outset, Djokovic was serving superbly, locating his first serve immaculately, finding good depth on his second delivery, and never allowing Nishikori to anticipate what might be coming next. Djokovic would win 80 percent of his first serve points in the match, and, even more impressively, 71 percent on his second delivery. Nishikori is one of the better returners, but he was helpless against Djokovic.

Djokovic held at 15 in the opening game, winning all four points on first serves that Nishikori could not get back into play. Delighted with that auspicious beginning, Djokovic opened up a 0-40 lead in the second game before Nishikori gamely saved four break points. But Djokovic was unrelenting. He converted on his fifth break point, lacing a trademark backhand down the line to coax an error from Nishikori. Down 15-30 in the third game, Djokovic released three more unstoppable serves (two on his first delivery, one on his second), and the 2011 and 2015 champion was right where he intended to be, ahead 3-0 in the first set.

This was classic Djokovic. When he was dominating the game all through 2015 and across the first half of 2016, he habitually secured an early break and made it count.

And so it was against Nishikori in the US Open semifinal. Nishikori held on in the fourth game but Djokovic was not going to lose his serve and he was unwilling to let his adversary back into the set. The No. 6 seed held at 15 for 4-1, propelled by an ace out wide in the ad court for 15-all. Nishikori managed to hold on in the sixth game, but Djokovic answered promptly with a hold at love for 5-2. Serving for the set two games later, Djokovic was outstanding, holding at love, making every first serve, and closing out the set emphatically with an ace. Set to Djokovic, 6-3. He won 20 of 24 points on serve.

Wanting to build on that comfortable opening set, Djokovic should have broken in the opening game. He had four break points but could not exploit his chances. Nishikori held on commendably after five deuces, and then had two break points in the second game—the only ones he would have in the entire match. Djokovic had two double faults in that game, but he rescued himself on the break points with his two-hander working well when it counted. He lured Nishikori into errors both times with well executed backhands, and held on eventually with two productive first serves that kept Nishikori at bay.

A potential problem had been averted. Rather than being behind 2-0, Djokovic was on serve at 1-1. Both players held easily to make it 2-2, and then Djokovic made his move. After Nishikori recouped from 0-40 to deuce, Djokovic garnered a fourth break point. He made good on it by pulling Nishikori off the court and drawing a running forehand error from the 2014 Open finalist.

Ahead by a set and a break, Djokovic was gathering steam. He for 4-2 and, after Nishikori took the seventh game, Djokovic went right back to work, holding handily for 5-3 with a nice piece of business, approaching on the Nishikori forehand and punching a high backhand volley crosscourt into a wide open space. Serving for the set two games later, Djokovic was unyielding. He started that game with an ace down the T at 116 mph, and kept plugging away sensibly, to seal the set 6-4.

The Serbian was now up two sets to love, and plainly Nishikori was down on himself and his chances. At 1-1, Djokovic missed one backhand return, but gave nothing else away. He broke for 2-1, and swiftly held at love for 3-1. Djokovic had a break point for 4-1 but Nishikori was steady. He held on after three deuces, keeping himself remotely in the match.

But Djokovic did not let that minor missed opportunity cloud his view of where he was going. He held for 4-2, and then kept the pressure on Nishikori in the following game, gaining the insurance break for 5-2. Serving for the match in the eighth game, he moved to 40-30 but, on his first match point, the Serbian was denied, netting a backhand under duress. He followed with one of his patented wide slice serves to elicit a forehand return error from Nishikori, and that gave him a second match point. This one he converted handsomely. At full stretch, as only he could, he sent a two-handed down the line for an outright winner.

"i was coming into today’s match knowing I’m going to play a player who is very quick and takes away a lot of the time from his opponent," Djokovic said. "He just likes to go for his shots. I knew that if I managed to sustain they speed on his shots, that I’ll have my chance kind of to break through and to make him feel uncomfortable and start making errors. That’s what happened."

Djokovic will take a 14-4 career record on court with him on Sunday for an enormously important confrontation against Del Potro. This will be a meeting between the sports’s most explosive, big hitter off the forehand side against a defender unlike anyone in the history of the sport. Del Potro will be seeking to blow Djokovic off the court, to blast winners at will, to serve prodigiously into the corners on the biggest points.

But the Serbian will counter with the best return of serve in the game and a highly underrated serve. He will look to prolong rallies, to force Del Potro to keep hitting one more ball, to move him from side to side until he can get the big Argentinian to make an error. Djokovic deserves the edge. He has been the best hard court player of the modern era, winning six Australian Opens on top of his two titles here at Flushing Meadows. Yet good fortune has not always been on his side at the US Open; he should not have lost five of seven finals on his favorite surface.

Another factor working in Djokovic’s favor this year is the fact that the court is slower than in years gone by. That suits him to the hilt. He can play his best brand of defense but dictate when the time is there. He can spot serve into the corners and win free points. He can orchestrate points with both power and precision.

It should be a magnificent final, hard fought on both sides of the net, well played by two men who want this title badly. I am picking Djokovic to prevail in four very tight sets for his third title at the US Open.