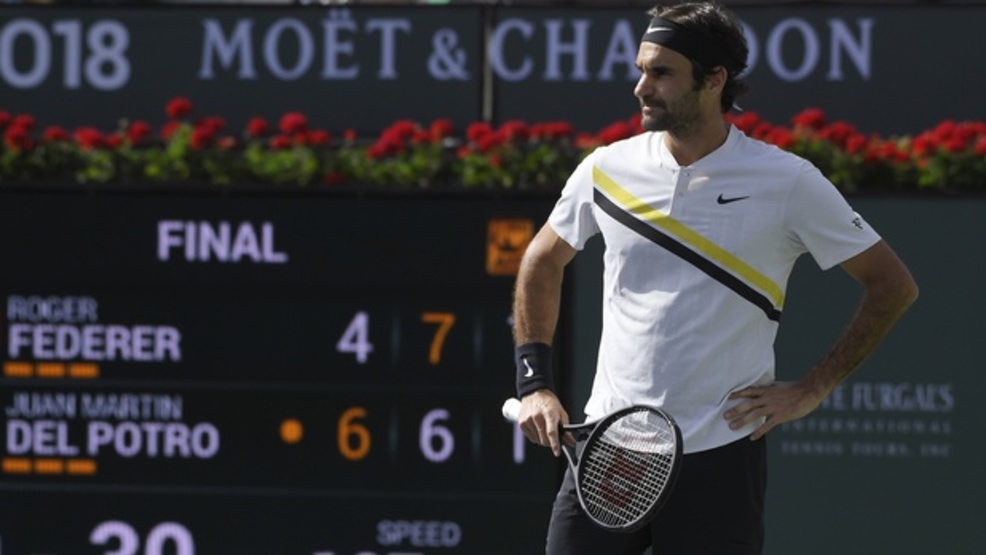 Steve Flink: Federer Is Focusing on the Larger Picture by Skipping the Clay Season

As the clay-court circuit begins in earnest at Monte Carlo this week, the central figure as always will be a Spanish dynamo with boundless competitive spirit, unmistakable brio and a lethal brand of topspin artistry named Rafael Nadal. The estimable left-hander will be looking to reassert himself after an injury-plagued season, remind seasoned observers why he is almost indisputably the greatest ever to play on the dirt, and impose himself customarily on a surface that suits him to the hilt.

Learned followers of the sport will be observing Nadal with heightened interest as he chases his eleventh career crowns not only in Monte Carlo but also at Barcelona and, most importantly, Roland Garros. And yet, while Nadal will be ubiquitous in the coming weeks—striving to make more history, hoping to hit a multitude of targets, determined to make his presence known—a fellow from Switzerland will be far away from the center of the tennis universe.

Roger Federer will be tending to his own knitting and needs. The Swiss Maestro has wisely elected to skip the entire clay-court campaign, as he did a year ago. Why mess with a winning formula? A year ago, Federer had been dominating the game majestically, rallying from 1-3 down in the fifth set of the Australian Open final against Nadal to sweep five consecutive games for his fifth title “Down Under”. Buoyed by that stunning triumph after being gone from the game for six months leading up to the 2017 season, Federer sparkled. After a brief setback when he failed to exploit three match points in Dubai against Evgeny Donskoy, this revitalized competitor with the wide-ranging arsenal and the soaring imagination swept the hard-court titles at Indian Wells and Miami. He was ruling tennis ruthlessly, comprehensively and relentlessly.

But Federer refused to allow his stirring run to cloud his judgment or collide up against his priorities. He realized that competing on the clay was a risky proposition. So he stepped aside, trained, recharged his engines, and skipped the entire 2017 clay season. That decision was demonstrably beneficial to Federer. Although he suffered a surprising loss to Tommy Haas (then ranked No. 302 in the world) in the round of 16 at Stuttgart, the Swiss was victorious in Halle, ousting Alexander Zverev for the title.

Still fresh yet fully prepared, Federer moved onto the lawns at the All England Club and won a record eighth Wimbledon singles crown over Marin Cilic. Over the fortnight in Great Britain, he did not drop a set. Would he have prevailed at Wimbledon if he had played a few red clay tournaments, including Roland Garros? I have my doubts.

What too many people forget is that in 2016, after having knee surgery in the aftermath of a semifinal loss to Novak Djokovic in Melbourne at the Australian Open, Federer rushed his return to the game. In his first tournament back, he bowed out in the quarterfinals of Monte Carlo against Jo-Wilfried Tsonga. On to Rome he went, losing there to Dominic Thiem in the round of 16. By then, his body was ailing. His knee remained vulnerable. His back was problematic.

Knowing what he was confronting, Federer bypassed Roland Garros, which was surely a painful experience for a fellow who had done himself proud at the world’s premier clay-court tournament, completing a career Grand Slam there in 2009, losing in four finals to Nadal over the years. He had appeared at Roland Garros for 17 years in a row, from 1999-2015.

Federer returned on the grass, losing in the semifinals of Stuttgart, Halle and Wimbledon. In the latter event, he injured his knee again during a five-set loss to Milos Raonic, and he was out for the year.

I believe that missing Roland Garros in 2017 was not troubling to Federer. This year, although he took plenty of time making up his mind, it was almost inevitable that he would again stay away from the clay and gear himself up mentally and physically for an all out bid to defend his Wimbledon title. He did not find the upper level of his game at Indian Wells and Miami this spring, losing to Del Potro 6-4, 6-7 (8), 7-6 (2) in the Indian Wells final despite serving for the title and having three match points in the final set of a blockbuster clash. Federer was subsequently beaten by Thanasi Kokkinakis in a final set tie-break at Miami.

Those losses conceivably could have made Federer more inclined to be out there on the dirt right now. But, in my view, he surely realized that he can’t afford the wear and tear of clay-court tennis any longer. He will be 37 in August, and he is well aware that he has to pick his spots carefully, protect his body sedulously, and not do anything that might cause his knee to act up or his back to become burdensome.

There is a part of Federer that would have relished performing on the red clay in places like Monte Carlo, Rome, Madrid and especially at Roland Garros once more. He would undoubtedly have enjoyed displaying his shotmaking genius for the Parisian audiences, and they would have welcomed him back wholeheartedly after his absence the last three years.

Federer, however, was not going to make merely a sentimental journey back to Paris; the only reason to go there would be to achieve nothing less than a second title. Deep down, he had to wonder if he could topple Nadal in Philippe Chatrier Court, potentially in another final. Despite sweeping his last five encounters with the Spaniard, he knew full well how difficult it would have been to defeat his revered rival in a best of five set showdown on clay. That is a feat Federer has never realized.

Frankly, though, I don’t believe Federer was preoccupied with the challenge of facing Nadal when he evaluated whether or not he would appear on the clay this season. He was—at least in my view—looking at the larger picture, determining what was best for himself in terms of preserving energy for the rest of this year and beyond, and figuring out what would make the most sense in terms of capturing more majors.

My feeling is that he will be every bit as big a favorite at Wimbledon as he was a year ago. Now that there is a three-week stretch between the end of Roland Garros and the start of Wimbledon, Federer gets the essential preparation he must have to be in peak form for the most prestigious tournament in tennis. All he needs from his combined efforts in Stuttgart and Halle is five or six matches, and the likelihood is that Federer will exceed that total. His foremost rivals will be enduring a difficulty surface change from clay to grass, but Federer can start his grass court practice sessions sooner and be ahead of the game in adapting to the lawns.

He is far and away the most natural grass-court player in the game today. Federer will always find his range and his footing on those courts, surely and swiftly, efficiently and elegantly. The cast of players who stand a realistic chance of overcoming Federer on grass courts is exceedingly limited. His propensity to sweep through the first four rounds of Wimbledon without the loss of a set is unquestionable. If he can manage a typically smooth excursion through the early rounds, Federer will save his best brand of tennis for the homestretch of the tournament. I fully expect him to do that this year at a venue that means more to him than any other.

A Wimbledon triumph would carry Federer into the summer in good stead, as was the case last year. But, in 2017, Federer was physically compromised in Montreal by an ailing back on the hard courts. In his final-round loss to Alexander Zverev, he was a shell of his normal self. His injury lingered into the U.S. Open, where Frances Tiafoe and Mikhail Youzhny pushed him into successive five-set matches in the first two rounds.

Eventually he was beaten in a four-set quarterfinal by Juan Martin del Potro. He finished the season reasonably well in the autumn, raising his record for the year against Nadal to 4-0, winning their Shanghai final comfortably in straight sets. He also took the title in Basel over Del Potro, but seemed slightly out of sorts when he was beaten in the semifinals of the season ending Nitto ATP Finals by a top of the line David Gofffin.

So the evidence is clear: Federer remained magnificent in the second half of 2017, but he was not as convincing as he had been during the first half. It is all about pacing and planning for the Swiss as he moves through the latter stages of an exemplary career. Even with intelligent scheduling last year, he still had the back issues that plagued him over the summer and into the autumn. Federer must proceed with a certain caution these days, and that is a fact not lost on him.

As long as he is deliberate, Federer will benefit immensely in what he accomplishes. He remains remarkably motivated, driven by a wide range of goals, propelled by private engines that have not been diminished over time. He already attained one significant goal this year by returning to No. 1 in the ATP rankings after winning Rotterdam, establishing himself as the oldest ever to reside at the top of the official rankings.

But many more targets remain on his table of incentives. He has secured no fewer than 97 career singles titles, only 12 shy of the Open Era record held by Jimmy Connors. Federer will surely make it to the magic 100 championships by the end of this year, and probably much sooner. I envision him winning two titles on the grass including Wimbledon, one or two during the hard-court campaign across the summer, and a couple more during the autumn. The way I look at it, Federer—provided he can stay healthy—will some day break that Connors record. I write that unhesitatingly.

The tournament title record is a worthy incentive for an outstanding champion. But I wonder if privately Federer has an even deeper determination to achieve something substantial this year that he has not done for a very long while—winning the U.S. Open title. That will be a taller order for him than winning Wimbledon. A larger legion of players are capable of catching him off guard on any given day in New York.

Curiously, he has not taken the U.S. Open since 2008, when he won his fifth crown in a row. Since that time, Federer has been back in the final twice, losing to del Potro in a five setter nine years ago and falling in a riveting showdown against Djokovic in 2015. In both 2010 and 2011, Federer was agonizingly close to reaching the finals, but in both years Djokovic saved two match points in semifinal classics and rallied to oust a crestfallen Federer.

What will happen if Federer is at the height of his powers at the U.S. Open this year? That would be fascinating. I would not be shocked if he is the victor in New York this time around. After all, this is a man who seldom sells himself short. Above all else, Roger Federer knows full well who he is, why he is still playing after capturing 20 Grand Slam championships, how he would like to arrange his priorities, and what he can still accomplish.

Federer has more than a few important triumphs ahead of him on the battlefield of tennis.