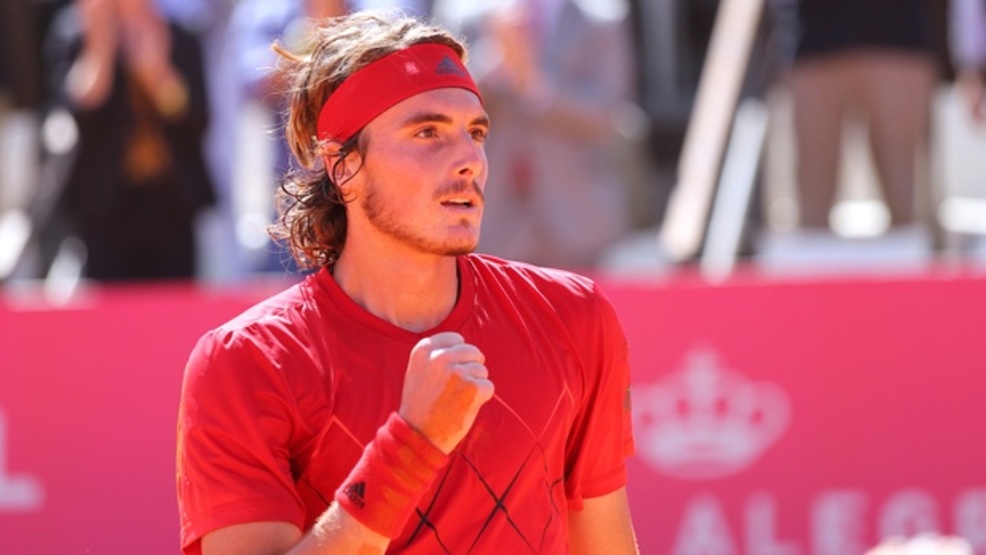 Fresh off his run to the final of the Barcelona Open, Stefanos Tsitsipas—an estimable 19-year-old from Greece, and a swiftly ascending tennis player with a clear view of who he is, what he wants and where he might be going—told me how much he values his heritage.

“Traveling around the world 30 weeks per year is the best way to represent your country, and I feel very proud to be representing the blue and white colors of my flag,” says Tsitsipas. “I really feel happy that I can do well and my country can take credit as well for that. I am just trying to do my best and remind people that anybody can become a good tennis player, no matter where he comes from.”

How have his fellow Greek citizens reacted to his sparkling run in Spain (ended swiftly by Rafael Nadal), and his steady run of success?

“It went kind of viral in Greece,” Tsitsipas answered. “Many people were talking about it and I had plenty of interviews that I did on big channels in Greece for big media centers. It got people’s attention. There were some politicians who congratulated me, so I was very happy I got so much attention. It makes me motivated to do even better in the future, and become even more popular. I hope to inspire more people to play tennis in Greece.”

As he expressed those sentiments about his country, Tsitsipas was in Portugal, competing at the Millennium Estoril Open. Tsitsipas was understandably upbeat. He had commenced the 2018 season stationed at No. 91 in the world. But that was before he upended the enormously promising Denis Shapovalov in Monte Carlo, before he cut down the formidable foursome of Diego Schwartzman, Albert Ramos-Vinolas, Dominic Thiem and Pablo Carreno Busta to reach the final of Barcelona, and before he backed up that excellent effort in Spain by reaching the penultimate round in Estoril, losing there in a final set tie-break against Portugal’s Joao Sousa, the eventual champion.

After all of those stirring performances on the ATP World Tour, Tsitsipas has soared to No. 40 in the world. That rise of 51 places in the ATP Rankings is the most substantial of any player currently residing in the Top 50. Prior to 2018, Tsitsipas had recorded only four tour-level match victories. Now, in barely over four months, he has achieved 14 match wins at that level.

“I have done big improvements since last year,” says Tsitsipas. “I have maybe stepped into another level in my game. I am very satisfied with the job I am doing at the Mouratoglou Academy in France with my coach Kerei Abakar. It is a step by step process. He is the one in charge of me at the academy and he is doing a fantastic job.”

The chief of that academy is, of course, Patrick Mouratoglou, who has elevated his reputation by coaching—among others—Serena Williams. Before he went to Barcelona, Tsitsipas spent some valuable time with Mouratoglou.

“I had a couple of lessons with Patrick himself, and he gave me an idea of some things I could do and he gave me extra confidence with my tennis,” says Tsitsipas. “I have been working at his academy for three years. His role has been a big one. A lot of it is mental, but also he has given me new ideas. He gives you something extra that you did not think you could add to your game. He is very experienced. He is a role model for me.”

While Mouratoglou has undoubtedly contributed significantly to Tsitsipas’ recent string of victories on the clay with his sagacity, one of the main reasons why the rising Greek star flourished in that span was his affinity for the surface.

Having said that, Tsitsipas recognized who he was up against when he confronted Nadal in Barcelona final. Tsitsipas—the first Greek man in 45 years to reach an ATP World Tour singles final—approached that meeting with a positive yet realistic attitude, knowing precisely why his opponent is universally regarded as the best player ever to appear on the dirt.

Tsitsipas had witnessed Nadal performing on clay countless times, but this was his first head to head appointment against him. Although he was soundly beaten, 6-2, 6-1, Tsitsipas relished the opportunity to compete against a man he reveres tremendously.

“It was a very nice experience,” he says. “I would call it the experience of a lifetime. It was something I was dreaming of for a lot of years, and it finally happened.

“Two things impressed me a lot about Nadal: his strength and his speed. I understood in a certain way what the difference is in becoming such a top and respected player liker him, and how much work I will need to do to actually reach his level. It is like we are two different players, me and him. I understood straight away when I played him how much work he has done throughout the years to achieve what he has.”

It was also readily apparent to Tsitsipas that Nadal’s severe topspin off his forehand and acute angles off his backhand—not to mention the general weight of his shots—make the Spaniard a harrowing opponent. He is so skillful and purposeful that adversaries are almost always left feeling diminished physically and muddled in their minds.

Tsitsipas was anticipating much of what was thrown at him, but that did not make his task any easier.

“It was exactly as I expected it to be. He has a huge forehand. He sticks to your backhand and spins a lot so it is hard to do something out there unless you take the ball early, but that is also very tough to do. On this surface, Nadal is five times better than me. You have to be really prepared for like a year before you play him.”

If Tsitsipas was found wanting against Nadal, that has not been the case these days against the rest of the tour. His victory in Monte Carlo over Shapovalov was one that stands out in his mind. The sprightly Canadian left-hander had been problematic for Tsitsipas over the last few years, and had won their 2018 Australian Open clash in straight sets.

“Winning that match in Monte Carlo was a big boost for me,” says Tsitsipas. “The last time I had beaten Shapovalov was at the Orange Bowl in 2015. I had lost to him three times in a row [including two junior matches in 2016]. It was a very important win for me. I felt after this match I could get good results on clay, which I have. It was a nice feeling.”

Shapovalov just turned 19 himself. Tsitsipas will conceivably be battling against the southpaw for a decade and beyond. In the meantime, both players are prime candidates to finish among the top eight in the Race to Milan and thus qualify for the Next Gen Finals at the end of the year. Currently, Shapovalov is No. 7 in the points and Tsitsipas is No. 2. That is not inconsequential to the standout from Greece.

“It is very important to me to make the Next Gen Finals,” he remarks. “I want to play there, to know that you are one of the best of the future of tennis. The Next Gen Finals is where all of the best players under 21 have the opportunity to face each other. It is actually one of my goals for this year. I am really looking forward to it and am very motivated to do well there this year.”

Setting targets and hitting them consistently has not been an issue for Tsitsipas in any way. Two years ago, he established himself as the No. 1 ranked junior in the world. That set the stage for a productive season in pro tennis last year, when Tsitsipas not only cracked the Top 100 in the world but also qualified for eight ATP World Tour events. That experience seemed to convince Tsitsipas that he could take his tennis on a decidedly upward path this year.

“I had some good wins last year in the qualifying matches, so I understood right away what my level is and how good I can play,” says Tsitsipas. “It was very important to qualify many times and play these main draw ATP events. I was expecting to do a little better and get some more wins in the main draws, but it all has to do with timing. I am gaining experience. It is all a matter of time.”

That is surely the case, but Tsitsipas’ surge this year suggests he will learn lessons faster than most of his contemporaries by keeping his focus almost entirely on tennis. But following other sports is a healthy diversion, and basketball is one of Tsitsipas’ favorites. And one of his favorite players, of course, is the Milwaukee Buck’s Giannis Antetokounmpo—better known as the Greek Freak.

“I am very proud of him. I don’t know him personally, but I like him. Back home he is one of the most popular athletes. But I am a big Houston Rockets fan and I follow them on Instagram.”

And yet, much as he enjoys observing other sports, Tsitsipas is single-minded about honing his game and harvesting his skills as a gifted tennis player who is rapidly evolving. But he is far from complacent about the state of his game.

“There are many things in my game that I need to improve,” he asserts. “Not specific shots, but just overall I need to get physically better, and get stronger mentally. I can become faster for sure. I will keep working hard and it will definitely come year by year.”

Part of Tsitsipas’ progress will be determined by acute self awareness of what is working or malfunctioning on the court. As such he watched tape of himself playing matches to clarify what needs to be done.

“I was actually watching today my match in Estoril [against Pablo Andujar] and trying to compare the difference from before. And the one I compared it to was when I played Pablo Cuevas in Antwerp last November. So in six months I saw a big difference in my body development, mass and physical experience. My whole game looked different. I am really happy to see the progress.

“I had a quick look at my match with Nadal in Barcelona, but I prefer to see the matches I win because I can look at what is working and the things I can correct on the court. It makes you feel better to look at matches you have won. It is more satisfying.”

To attain fulfillment in the long term, however, Tsitsipas will demand an awful lot from himself because his ambitions run so deep. He is a player who will settle for nothing less than the best from himself.

“I want to leave great things behind,” he says. “After all, it is my job and I started seriously with my tennis as soon as I was 12 years old. So I just want to leave something behind, win tournaments, win Grand Slam tournaments, become popular, make popular the sport in Greece, become popular in Greece, and break records. This is the stuff I would be very, very happy to accomplish in tennis. That is my goal for the future.”