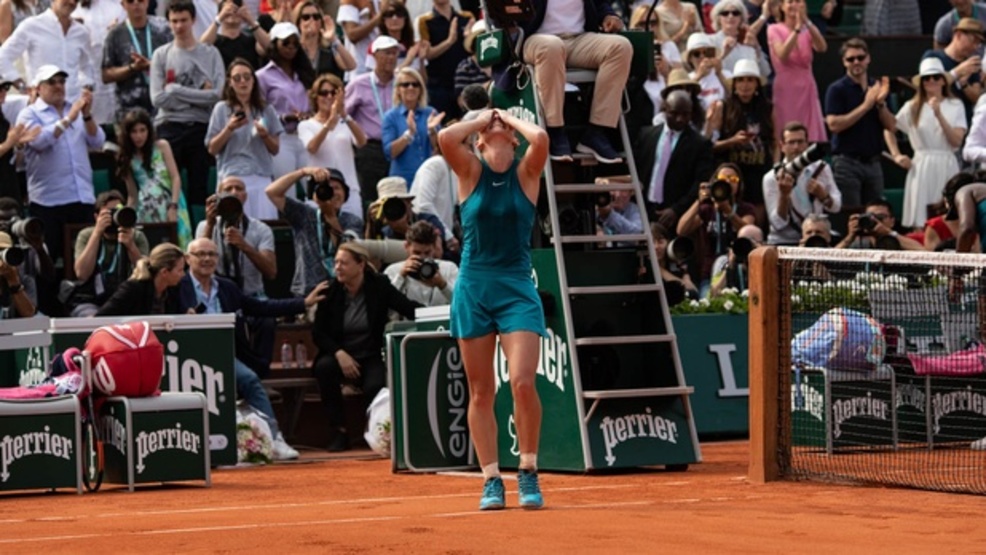 It took longer than expected, but Simona Halep is finally a Grand Slam champion. (Anita Aguilar)

PARIS—This was entirely familiar territory for the perspicacious Simona Halep. Confronting a determined Sloane Stephens in the final here at Roland Garros, the Romanian must have wondered whether the tennis gods were frowning down upon her again. Twice she had been beaten in title-round contests at the French Open, falling short in memorable three-set skirmishes against Maria Sharapova in 2014 and Jelena Ostapenko a year ago. Earlier this year, she battled down to the wire in the final of the Australian Open before losing that extraordinarily high-quality encounter to Caroline Wozniacki, 7-6 (2), 3-6, 6-4.

Think of how close Halep had been to realizing her largest goal of winning a major. She was ahead 4-3 in the final set against the Danish competitor before dropping the last three games. She was ahead by a set and 3-0, (with a point for 4-0) before Ostapenko blasted her off the court in Paris last year. And now, wanting wholeheartedly to upend Stephens on the Parisian clay, knowing how much was riding on the outcome, realizing that collecting one of the premier prizes in tennis can be exasperatingly difficult, Halep was in another serious bind.

Stephens thoughtfully and methodically took command of the final, taking the first set stylishly, moving ahead 2-0 in the second set, leaving a seasoned Halep wondering what it would take to gain the upper hand and get across the finish line safely. To be sure, Halep was not in an enviable position, and it seemed entirely possible that victory on an auspicious occasion would elude her again.

And yet, Halep, dismayed though she may have been, perhaps concerned that fate might deal her another devastating blow, refused to talk herself into a bruising defeat. She simply stuck assiduously to her task, looked for ways to disrupt the American’s rhythm, and took it one point at a time. With the vociferously pro-Halep crowd chanting her name and spurring her on, applauding her every move unabashedly, and willing her to victory, Halep came through not only deservedly but, in the end, comfortably. She prevailed 3-6, 6-4, 6-1, sweeping 12 of the last 15 games for the single most satisfying triumph of her professional career.

No one is content to be No. 1 in the world without validating that status by securing one of the game’s highly-coveted Grand Slam tournaments, and Halep is no exception to that rule. At the outset, however, she was thoroughly outplayed by a clear-eyed and sound practitioner in Stephens. It was Stephens who was the better defender, Stephens who found holes in the Halep game, and Stephens who seemed in control of her surroundings and of the tactical landscape of the match.

Meanwhile, Halep was struggling to find the range off her forehand, always the make-or-break stroke in her arsenal. This combination of factors made matters look ominous for Halep all through the early stages. She was not making much of an impression from the backcourt and Stephens seemed to be outthinking Halep from a strategic standpoint.

Stephens opened the proceedings with an easy hold before Halep worked her way unceremoniously through a deuce game for 1-1. Now Stephens imposed herself as best she could, holding at 30 for 2-1. Stephens accelerated the pace off her forehand persuasively to break for 3-1, flattening out a return off that side to draw an error for 30-40, sealing the break with an exemplary sliding forehand on the stretch that left Halep compromised on her forehand side.

The American would not allow that early advantage to be taken from her. She held at 30 for 4-1 on an errant return from the Rumanian. After Halep held in the sixth game, Stephens stood at 15-30 in the seventh, but once more her forehand drove her out of potential danger. An inside-out forehand had too much mustard on it and induced a mistake from Halep: 30-30. Halep missed a return: 40-30. And then Stephens dictated again off the forehand, releasing an inside-out winner that was struck impeccably.

That shot took Stephens to 5-2. Two games later, serving for the set, she was down 30-40, but Halep netted a routine backhand and then Stephens released a body serve to the forehand that Halep could not handle. Set point had come for the American, and she took it commendably with a solid crosscourt backhand forcing Halep into a down the line two-hander wide.

Set to Stephens, 6-3. Knowing she was right where she wanted to be as a first-set victor, Stephens looked to exploit that momentum, and that is precisely what she did. In the opening game of the second set, Halep saved two break points but an unrelenting Stephens fashioned a third with a creative piece of business. Halep had produced a superb forehand drop shot, but Stephens scampered forward and re-dropped, angling her shot crosscourt for a magnificent winner. On break point No. 3, Stephens lobbed cunningly crosscourt and a retreating Halep could not handle the overhead.

Stephens was up an immediate break, and then she held from 0-30 for 2-0. She clearly believed she was going to win this match and claim a second major title. The American was far from overconfident, but her composure and court sense were fully on display. Yet Halep held at 30, won a pair of love games in a row, and broke at 30. She had taken 16 of 20 points, four games in a row for a 4-2 lead, and, in the process, had reminded Stephens that finishing matches of consequence is much tougher than simply moving out in front.

And yet, the American remained focussed and unruffled. She took advantage of a poor service game from Halep to break at love and reached 4-4 by holding at 30, sealing that game by prevailing in a high quality, 18-stroke exchange.

When Halep served at 4-4, the score was locked at 30-30. The top seed was six points away from a fourth defeat in a major final and a third setback in a Roland Garros title-round showdown. But she played this critical point with the heart and mind of a champion. She sent a high looper to the Stephens backhand, elicited a short ball, and stepped in unhesitatingly to drive an inside-out forehand for an outright winner. At 40-30, Halep was just as clutch, connecting with an unanswerable forehand down the line that was every bit as good as a winner.

Halep had moved to 5-4, and now Stephens was under duress, serving to stay in the set. At 30-30, Halep seized the initiative again, walloping a forehand down the line to provoke a mistake from the American. Now, at 30-40, Stephens was unmistakably flustered. She went for a backhand down the line that was not in the cards, sending it wide. The set was gone. Halep was back in business.

Both players briefly left the court after that second set, and when they returned Stephens had a small opening in the first game of the third set. Halep was down 0-30, but Stephens lost the next four points, making three glaring errors in the process. Her forehand was starting to fly. Her nerves were frayed. Her stamina was not measuring up to Halep’s, physically or emotionally.

From 30-30 in the second game of the final set, Stephens faltered significantly, missing a backhand down the line wide that was unforced, directing a forehand tamely into the net. Halep was roaring. At 2-0, 40-30 for her surging opponent, Stephens found the net tape on the 24th stroke of a high-octane rally.

With Stephens serving at 0-3, 40-30, Halep unleashed a scintillating backhand crosscourt winner on the 18th stroke of the rally after Stephens had played that point meticulously, moving her adversary from side to side. Halep took the next point and then virtually sealed the triumph of her life in masterful fashion. In this stirring rally, Halep dug out a short low ball to her forehand and followed with a spectacular backhand overhead to win the point.

Now Halep was playing a different brand of tennis and Stephens was spent. Halep held at 15 for 5-0. Two games later, she served it out in style. She connected for her only ace of the day for 30-15 and got the last hold at 30. The inner turmoil was gone. The title belonged to Halep. The victor could not have been more worthy of the honor.

“I was dreaming of this moment since actually I started to play tennis,” said Halep. “It is my favorite Grand Slam. I always said that if I’m going to win one, I want it to be here. My family was all the time supporting me since I started and all of the coaches and all the people that I worked with during this 20 years. All the friends, all the people that are really special for me in this life: without them probably I couldn’t come back after losing three finals of the Grand Slam. Now I just want to forget everything and enjoy this moment because it’s really special.”

Halep realized that she had vindicated herself by winning this title, much as Wozniacki had in Australia. There is something somewhat hollow about residing at No. 1 in the world without winning a major title. The achievement of being at the top remains remarkable, but the fact remains that the greatest players succeed on the biggest stages as well as becoming the top-ranked player on the planet. Now Halep has done that.

She said in her press conference, “The fact that I could be No. 1 in the world last year gave me confidence and gave me, like, a little bit of relief, because I touched something big, something huge, and I just had in my mind to win a Grand Slam after that. So the ranking didn’t matter anymore. But the fact that I’m No. 1 now and winning a Grand Slam makes me very, very happy and makes me thankful for everything that I have done, everything that I have received from all of the people, all the love, all the support.”

For her part, Stephens was gracious and philosophical, accepting her defeat without being happy about it.

As the US Open champion said, “Obviously being in a Grand Slam final is very special. It’s a great opportunity. Not very many players ever get to a Grand Slam final, so the fact that I have won one and been in another final in such a short period of time makes me very optimistic and pleased with myself. I’m not satisfied, but I am proud of myself.”

As well she should be. Here is an enigmatic woman who stunned the tennis world by capturing the US Open last year but then she suffered through an inexplicable eight-match losing streak. Across the spring she came back strong and won the prestigious crown in Miami. And now this. Stephens came to Paris ranked No. 10 in the world and, by virtue of her sparkling run to the final, she will move closer to the top. I fully expect Stephens to be in the thick of things at both Wimbledon and the US Open this summer.

Halep, meanwhile, has solidified her status at the best player in the world. She is a major champion at last. She deserves to be immensely gratified about what she has done, how she achieved it, and why she persevered. There are no guarantees in the game of tennis or, for that matter, in the larger game of life. But this much is certain: Simona Halep has demonstrated that she belongs amongst the elite, and that is no mean feat.