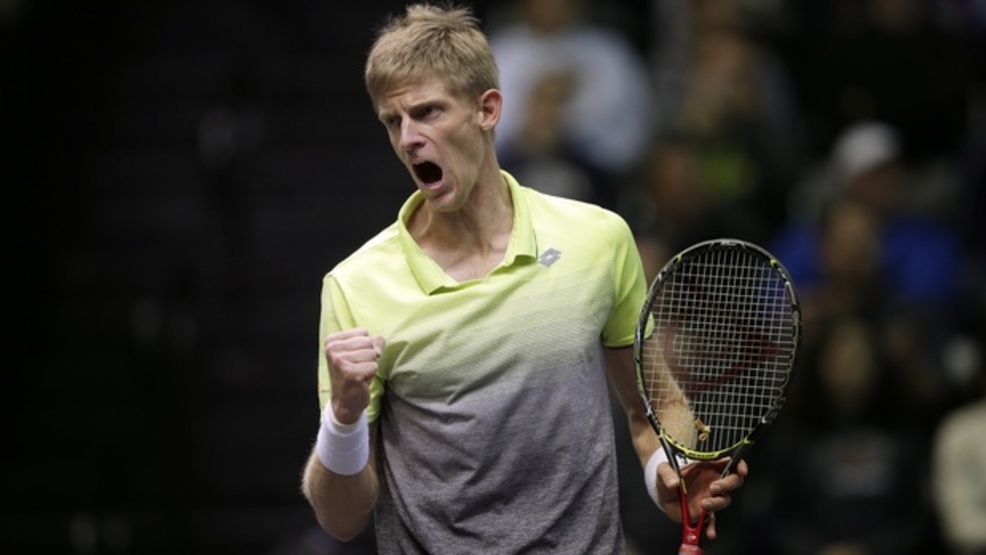 While Roger Federer drew most of the headlines this past weekend for securing the 97th title of his illustrious career in Rotterdam, another admirable individual was busy winning his first tournament since Winston Salem in the summer of 2015. Out on Long Island at the New York Open, the industrious Kevin Anderson claimed his fourth career ATP tour title by overcoming Sam Querrey in a first-rate final fought out indoors on a black hard court in front of an appreciative audience.

Anderson, of course, celebrated a career milestone last September not far away at the U.S. Open, reaching his first major final before bowing out against a finely tuned Rafael Nadal. But his record since that sparkling run at Flushing Meadows has been lackluster. He played five tournaments in 2017 after the Open, and came away with very little. His match record in that span was 3-5, and tiebreakers were often his downfall.

The 6’8” South African was ousted in a final set tiebreaker by Ryan Harrison in the round of 16 at Tokyo, fell in a pair of tiebreaks against Jan-Lennard Struff in the second round of Shanghai, and suffered the same fate against Spain’s left-handed Fernando Verdsasco in the quarters of Stockholm—dropping two more tiebreakers there. Thereafter, Anderson lost in the first round of Vienna to Guillermo Garcia-Lopez, and then was beaten in his opening-round assignment against Verdasco indoors at Paris.

That was surely not the way Anderson wanted to conclude his 2017 season. He faded down the stretch after his inspired journey at the U.S. Open. Making amends, he got to the final of his first tournament of 2018 in Pune, India, but was beaten somewhat surprisingly by the human backboard, Giles Simon. On he went to Melbourne for the Australian Open with good preparation and much encouragement, but Anderson was halted in a five-set, first-round meeting against the decidedly improved Kyle Edmund.

And so the big man came last week to Long Island determined to bring out his best tennis, hoping to ignite his game and impose his will. He was thoroughly tested every time he stepped out on the court at the New York Open, but Anderson met those moments with unwavering determination and remarkable composure. He commenced his campaign with a 3-6, 6-4, 7-6 (5) triumph over Ernesto Escobedo, followed by fending off the spirited Frances Tiafoe 6-3, 5-7, 6-4, and then withstood a fierce comeback from Kei Nishikori in the penultimate round. Anderson prevailed in that one, 6-1, 3-6, 7-6 (4).

Anderson versus Querrey always figured to be a close and intriguing confrontation, and that is precisely what it turned out to be. They had faced each other 15 times in head-to-head competition, with Querrey leading 8-7 in the series. Last year, Querrey edged Anderson in five sets in a round of 16 collision at Wimbledon, but Anderson was victorious over the 6’6” American in a riveting four-set showdown under the lights in the U.S. Open quarterfinals.

Having watched that skirmish at the Open, I relished the opportunity to see them go at it again a few days ago. These two players are so evenly matched that their clashes are almost invariably suspenseful, hard fought, and highly charged. Both men move extraordinarily well for their size. Their wingspan makes them dangerous on returns. Anderson’s backhand down the line is much improved; Querrey’s forehand down the line is among the best in tennis. They are two of the premier servers in tennis.

Strangely, however, the two tall competitors had their share of problems holding serve over the course of the first two sets. Anderson had the upper hand early on. Releasing an ace and a pair of service winners in the opening game, he held at 30. With Querrey serving at 15-30 in the second game, Anderson improvised beautifully, making a sliced backhand passing shot for a winner down the line on the run, confounding Querrey. Anderson gained the break at 30 for 2-0. He led 40-30 in the third game, one point away from a significant 3-0 lead.

But Querrey flicked a brilliant forehand passing shot low crosscourt to induce an error, getting back to deuce with that well-executed shot. Soon Querrey broke back. Going five for six on first serves in the following game, the 30-year-old held for 2-2. The battle was on. Anderson rolled to 3-2 with a love hold before Querrey asserted himself forcefully. The American held at 15 for 3-3, broke in the seventh game, and held at love for 5-3, unleashing three unstoppable first serves in the eighth game.

Querrey had collected 12 of 15 points to turn the set in his favor. He nearly broke Anderson again in the ninth game. Querrey had three set points but a resolute Anderson crawled out of that corner and held on for 4-5. Unfazed, Querrey closed out the set with a comfortable hold, taking it 6-4. He had come from a break down to win six of eight games and largely set the agenda, while Anderson had not spotted his serve with anything like his customary accuracy.

After the set, Anderson called for the trainer to deal with an arm issue. Seemingly reassured that his ailment was not serious, he went right back to work assiduously, and once more surged in front. Anderson gave himself a lift by holding at love with three aces in the opening game of the second set. Finding the range off his flat forehand, Anderson broke Querrey at the cost of only one point for 2-0 and then held in a deuce game for 3-0, lacing a backhand skillfully down the line for a winner.

Relaxed and confident, Anderson broke again for 4-0 with heavier hitting off the forehand. He held easily for 5-0, sealing that game with a nifty topspin lob winner off his backhand. In five games, Anderson had conceded only seven points. Yet Querrey was not giving up on the set. He swept three games in a row, saving four set points in the process. Anderson gathered himself, holding from 15-30 in the ninth game to capture the set 6-3.

Neither player had performed at peak efficiency during those first two sets, but they moved much closer to the top of their games across the compelling third set. Querrey had the advantage of serving first in that final set, and he could not have started any better. Two aces, a forehand winner, and then an unstoppable first serve gave Querrey a swift hold at love. Anderson poured in five consecutive first serves and held at 15 to make it 1-1.

Querrey engineered another love hold for 2-1 before Anderson struck back boldly for 2-2, holding at 15 and closing out that game with a pair of service winners. Yet Querrey found himself in precarious territory during the fifth game. Twice he was down break point, but he escaped in both instances by going to the serve-and-volley and keeping Anderson at bay. After three deuces, Querrey held on for 3-2.

Now Anderson was under duress. Serving in the sixth game, he trailed 30-40, but he gave Querrey a taste of his own medicine, serving-and-volleying to erase the break point as the American netted his return. Anderson made his way safely to 3-3. Querrey was pressed again in the seventh game, but held on from deuce as Anderson punched a forehand volley wide and Querrey followed with an ace. 4-3, Querrey.

Anderson retaliated with a love hold, opening and closing the eighth game with aces. It was 4-4. Both competitors held on at 15 to knot the score at 5-5. After Querrey held at 30 for 6-5, Anderson was two points away from defeat when he served to stay in the match at 30-30 in the twelfth game. His backhand down the line clipped the net and disrupted Querrey’s timing. The Californian erred off the forehand side. Relieved, Anderson served an ace to hold for 6-6 and set up a tiebreaker.

The South African had flourished all week in these sequences, and perhaps that gave him a measure of security he might otherwise have lacked. He had been in the pressure cooker of a final set tiebreaker in two of his three triumphs throughout the tournament, and there he was again in the same situation. He could not have been more meticulously prepared.

Anderson had the luxury of a comfortable lead, and that allowed him to hit out freely. He laced a penetrating two-hander down the line, and a harried Querrey drove a forehand long. Now Anderson stepped into a forehand and sent it crosscourt with impressive velocity. Once more, Querrey was compromised, missing with a crosscourt wide. Anderson had moved unhesitatingly to 5-0. He advanced to 6-0 with a crackling forehand winner off a weak return from Querrey. Although Querrey saved one match point with a forehand, down-the-line winner, he would survive no longer. Anderson rolled a forehand passing shot crosscourt, clipping the sideline for a winner. The tiebreaker went to Anderson, 7-1. He had won the match 4-6, 6-3, 7-6 (1). His exhilaration and relief were strikingly evident.

The victor was worthy of the prize he secured. Anderson poured in 71% of his first serves, 5% better than his opponent. Although Querrey had the edge in first-serve points won (73% to 68%), Anderson had a much larger advantage in second-serve points won (58% to 38%).

In this battle of the big men, in a skirmish between two big hitters with wide-ranging arsenals, on a day when either man could easily have triumphed, Kevin Anderson came through with immense poise under pressure. Winning the New York Open has lifted him to a career high at No. 9 in the world. The view here is that he can climb higher than that. With the deep instability in the world’s Top 10 at the moment, Anderson has the propensity to take his place among the Top 5 if he plays his cards right. His multitude of followers is betting that he will do just that.