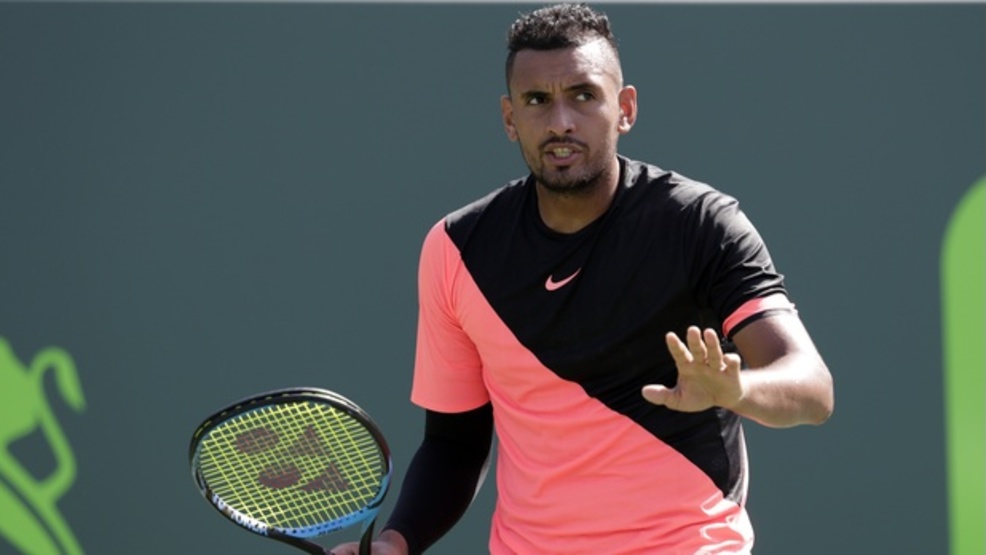 Steve Flink: Kyrgios Has Little Trouble Getting by Fognini at the Miami Open

Italy’s enigmatic Fabio Fognini and Australia’s confounding Nick Kyrgios had never faced each other before they collided on the hard courts in Miami on Monday. That was surprising because both players have been close to the forefront of the game for a long time. Fognini is 30, and has resided among the Top 100 in the sport for the past 11 years consecutively. Kyrgios is a much younger fellow, and is still only 22. But he has been a top-flight player since 2014, when he upended Rafael Nadal on the Centre Court of Wimbledon. These are two immensely capable competitors with sparkling gifts and wide-ranging arsenals, but the fact remains that they are prone to extreme and inexplicable mood swings, wild fits of unpredictability and decision making on the court that can leave spectators shaking their heads incredulously. The bottom line is that forecasting the form of Kyrgios and Fognini on any given day can be an exercise in futility.

That is why I did not want to miss their third-round clash at this Masters 1000 tournament in Florida. Quite simply, I did not know what to anticipate. The hard surface slightly favored Kyrgios, but the conditions are relatively slow, which could have benefitted Fognini if this had been one of those afternoons when he was able to avoid getting in his own way. It was not. To be sure, he has had days worse than this, but despite some fleeting moments when he showed off his ground game spectacularly, Fognini largely advertised his discontent with himself and the way he was performing. Kyrgios was not at his zenith, but he set the tempo essentially as he pleased, gave very little away on his serve, never faced a break point, and paced himself beautifully. The dynamic Australian was thoroughly professional on this occasion, disciplined and focused, concentrated and composed. He came away convincingly with a 6-3, 6-3 triumph, moving on swiftly to the round of 16 in a mere 66 minutes. His opening-round victory over Dusan Lajovic took 48 minutes. And so his total time on court as he heads into the heart of the tournament has been six minutes shy of two hours. That is good and efficient work from an individual who almost overflows with talent and creativity.

Kyrgios opened his contest with Fognini with a comfortable hold at 30. With the Italian serving at 30-30 in the second game, the Australian measured a forehand down the line immaculately, lacing that shot into the clear for an outright winner. He had very little margin for error, but made it look as if he was hitting into awfully big space. Perhaps shaken by his opponent’s audacity, Fognini erred off the forehand side unjustifiably. It was 2-0 for the No. 17 seed. His adversary was under immediate duress.

The following game was not insignificant. Kyrgios was taken to deuce as Fognini found his range from the backcourt, but that opening amounted to nothing. Kyrgios cagily went to a soft backhand slice in the following point and coaxed an error from a frustrated Fognini. At game point, one of the sport’s premier servers sent an ace down the T. That made it 3-0 for Kyrgios.

Fognini held at love in the fourth game, but Kyrgios held at 30 for 4-1 despite a couple of double faults. Fognini held at love in the sixth game with an ace down the T, but his fragility as a competitor surfaced in the following game. With Kyrgios serving at 15-15, Fognini had a good look at a forehand inside in, but sent that shot wide. He smacked his racquet on the court in disgust. Kyrgios was all business and self-restraint, serving an ace for 40-15 and taking the next point with an impeccably placed wide serve in the deuce court. 5-2 for Kyrgios.

Fognini then registered another easy hold at 15, but he was only delaying the inevitable. Serving at 30-30 in the ninth game, Kyrgios aced Fognini out wide, and followed with an excellent body serve to the backhand that was unmanageable for Fognini. Kyrgios held at 30 to close out the set 6-3. Remarkably, Kyrgios won 26 points in the set compared to 24 for Fognini, but the early service break gave the Australian a deep sense of inner security. He had no reason to worry once he was out in front; his mind was totally at ease.

Kyrgios found himself with a break point opportunity in the opening game of the second set after Fognini double faulted consecutively, but the Italian battled out of that corner admirably, collecting three points in a row with bold ball striking to take a 1-0 lead. Kyrgios, however, was unshakable. He held at 30 with a 133 MPH ace down the T. Now Kyrgios was ready to make his move. At 15-30 in the third game, he suddenly accelerated the pace off his backhand majestically, driving a winner effortlessly into the clear. Fognini was dumbfounded. He pulled a backhand wide to lose his serve at 15. On to 2-1 went Kyrgios. He confidently held at 15 for 3-1 after losing the first point in that game.

Fognini took the next game at the cost of only one point. Although Kyrgios wasted a 40-0 lead, he secured the next two points from deuce to reach 4-2. He was closing in on victory. Fognini held on in the seventh game with a neatly executed first serve down the T at 40-15, setting up a backhand winner crosscourt, but Kyrgios sedulously protected his serve in the eighth game with deliberate play from the baseline coupled with terrific defense. He held for 5-3 with a service winner down the T.

Now Fognini served to stay in the match, but an air of desperation had set in for the Italian. Double faults on the first and third points put him down 15-30. An unprovoked backhand error made it 15-40. Fognini saved one match point but was soundly beaten on the second by a scorching backhand down the line from Kyrgios. The Australian did not need to serve the match out. He finished it off 3 and 3 with firm resolve.

This loss will sting for Fognini. A year ago, he lost to Rafael Nadal in the semifinals of Miami. He currently stands at No. 18 in the ATP Rankings but he will fall outside the Top 20 next week. Kyrgios, meanwhile, has some hard work to do if he wants to avoid a similar situation. His current status is at No. 20, but a year ago he fell in an enthralling semifinal against Roger Federer in Miami, bowing out in a final set tiebreaker. The Australian needs a couple more wins to return to the penultimate round of this tournament.

But he just might make a better showing than that. Here is a man who is fully capable of claiming the title if he keeps serving as prodigiously as he has thus far, and maintains his competitive equilibrium. Kyrgios started the 2018 season on an entirely high note, winning the title in Brisbane. At the Australian Open, he was beaten somewhat surprisingly by an inspired Grigor Dimitrov in the round of 16. He played Davis Cup the first weekend in February, but an ailing elbow forced him out of competition until Miami.

The hope here is that Kyrgios does himself justice now. In four sets on his way to the round of 16, he has not lost a service game. His state of mind seems strong, yet that could change rapidly. The mercurial nature of Nick Kyrgios is precisely what makes him such a fascinating player to watch. He can frequently be infuriating and is too often bewildering. He can also be a joy to behold when his mind is fully on the task at hand.

This much is certain: Nick Kyrgios will never be anything less than an arresting tennis player with an extraordinary propensity for tall achievements. Whenever he decides unequivocally that he is ready to rigorously pursue his craft with no reservations, Kyrgios will surely land somewhere among the elite of his profession. He must not allow himself to settle for anything less than that.