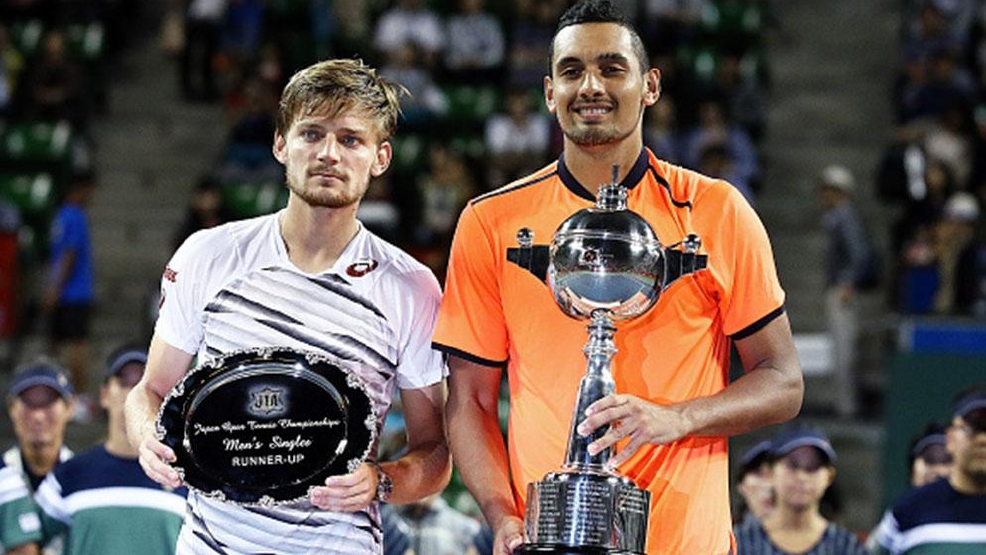 For the past three years, I have tried in vain to understand what drives Nick Kyrgios. He his sent out many conflicting signals about where he wants to go in this game and how he plans to get there. The 21-year-old is a young man with a multitude of gifts, a serve that is one of the three or four best in the sport, a diversified ground game featuring an extraordinarily potent forehand and an underrated two-handed backhand often produced with a short backswing that enables him to direct his shots down the line with remarkable deception and accuracy. He has a wide arsenal of strokes, a rich combination of power and finesse, and a showman's flair for doing spectacular things with persuasive ease.

I have never doubted that Kyrgios has the potential to become a major champion, to reside inside the top five and perhaps even reach the penthouse at No. 1. He is that good; he has that kind of talent. He demonstrated that point forcefully by claiming his third singles title of 2016 over this past weekend, securing the Rakuten Japan Open Championships in Tokyo with a hard fought and thoroughly deserved 4-6, 6-3, 7-5 triumph over Belgium's industrious David Goffin. Kyrgios reminded himself and everyone who follows the game closely that when his mind is totally on his business and his heart is fully engaged, he is a great player with almost no boundaries on his potential.

But unlike other young competitors who have already established themselves as future rulers of the men's game—Germany's Alexander Zverev and Austria's Dominic Thiem spring to mind—Kyrgios too often seems to lose interest in what he is doing, frequently failing to summon the best of what he has to offer. His attitude can be abysmal. A case in point would be a round of 16 appointment at Wimbledon he had this year with Andy Murray. The first set was close all the way. Kyrgios gave it everything he had against the eventual champion, but Murray's returning at the end of that set was magnificent. The British player prevailed 7-5.

Kyrgios had performed commendably, and seemingly was ready to fight on in that clash unwaveringly. But he virtually surrendered in a dismal second set effort, conceding it 6-1, playing as thought he no longer cared. He allowed Murray to win that set without working hard. It was a poor reflection on his competitiveness. Murray rolled to a 7-5, 6-1, 6-4 triumph, and his performance was typically professional and polished. Conversely, Kyrgios seemed willing to accept his plight readily. That was disturbing to his band of supporters.

But his Tokyo triumph over the seasoned Goffin was abundant proof that when Kyrgios is operating on all cylinders and displaying the determination that we expect from the leading players, he can be terrific. This could easily have been a day of defeat for the Australian. He was creating one opportunity after another to take control of the match, but an inspired and resolute Goffin was very good under pressure. Goffin stood at 1-2, 15-40 in the opening set but swept four consecutive points to hold on for 2-2, closing that game with an impressive forehand winner up the line. After both men held comfortably to knot the score at 3-3, Kyrgios wandered into difficulty in the seventh game, double faulting to fall behind 0-30. Serving at 15-40, Kyrgios was caught off guard by the superb ball striking of the Belgian. Goffin broke for 4-3 with a gorgeous winner off the backhand.

Kyrgios nearly broke back, reaching 15-40 in the eighth game. He had Goffin in a vulnerable position up at the net, but was unable to exploit the situation. Goffin guessed right as Kyrgios sent a forehand passing shot down the line, leaning to his left ably and punching a backhand volley crosscourt for a winner. He saved two more break points, holding on for 5-3. Kyrgios then served to stay in the set and trailed 0-40, but he captured five points in succession—two with aces—to hold on in the ninth game. That was a brave stand, but Goffin held at 15 to seal the set 6-4.

The third game of the second set was critical. Kyrgios fell behind 0-40, faced no fewer than five break points, but held on after four deuces to take a 2-1 lead with an ace down the T. Bolstered by that comeback, Kyrgios broke in the fourth game, and that gave him a sharp bolt of confidence. He did not miss a first serve in holding at love for 4-1, releasing an ace and three un-returnable deliveries. At 4-2, Kyrgios held at love again, starting with a 126 MPH second serve that was unstoppable, finishing that game with three thundering aces in a row. Two games later, serving for the set at 5-3, Kyrgios celebrated a third love hold in a row with four more telling first serves in a row.

It was one set all. Kyrgios had closed out the second set with a flourish, but at 0-1 in the third he double faulted to trail 30-40. He saved that break point with an ace out wide, saved a second break point with a stinging second serve, and then held for 1-1 with a pair of aces. Both men held to make it 2-2, and then Goffin found himself in a bind. The Belgian was down 15-40 in the fifth game, but he was obstinate and durable yet again in a tight corner, holding for 3-2. Kyrgios cast aside that disappointment to reach 3-3, and then had another significant opportunity.

Goffin was behind 30-40 in the seventh game, but Kyrgios inexplicably drove a two-hander into the net. Goffin escaped after that unforced error from the Australian, moving to 4-3. But soon Goffin arrived at another tough juncture. At 4-4, he double faulted at 30-15 and followed with an errant inside out forehand. It was break point for Kyrgios, but Goffin replied tremendously with a forehand inside in winner. Kyrgios garnered a second break point, but Goffin stymied him with an excellent second serve. Goffin held on for 5-4, and now Kyrgios was serving to stay in the contest.

In that pivotal tenth game, Kyrgios double faulted and then erred off the backhand side. He was precariously perched at 0-30, two points away from a jarring three set defeat. Goffin had an inviting short ball off his backhand side. He went aggressively down the line, which he had done with regular success throughout the battle. But he drove his two-hander into the net tape. A relieved Kyrgios followed with an unanswerable body serve to the forehand, a solid backhand volley that drew a topspin lob long off the backhand from Goffin, and a service winner. Kyrgios was back to 5-5.

Goffin opened the eleventh game with a double fault and never really recovered from that self inflicted wound. He was broken at 15. Now Kyrgios was right where he wanted to be, serving for the match at 6-5. He commenced that game with an ace, moved to 30-0, lost the next two points, but regrouped admirably with a service winner down the T and an ace down the T. His 4-6, 6-3, 7-5 win was no accident. Kyrgios was mightily determined from beginning to end, and he outperformed an adversary who was in stellar form. Kyrgios served 25 aces across the three sets. He was awfully good under pressure down the stretch. He wanted this title very badly.

I wish we could see this version of Nick Kyrgios more often. His 2016 record reflects the fluctuating nature of his personality and commitment to his profession. After losing to Tomas Berdych in the third round of the Australian Open, he won Marseille convincingly, cutting down Marin Cilic and Berdych decisively at the end. Kyrgios retired with an injury against Stan Wawrinka in the semifinals of Dubai and then lost in the first round of Indian Wells.

At Miami, Kyrgios was back in form, losing to Kei Nishikori in the semifinals. On the clay court circuit, he was a semifinalist in Estroril and a quarterfinalist in Madrid. Rafael Nadal ousted Kyrgios in the round of 16 at Madrid and Richard Gasquet stopped the Australian in the third round at Roland Garros. He lost to Milos Raonic in the first round of the Aegon Championships before that disappointing performance against Murray at Wimbledon. After losing in the first round of Toronto, Kyrgios won Atlanta over John Isner. In his next three tournaments, Kyrgios did no better than a round of 16 showing in China. But then he came through beautifully in Tokyo.

The hope here is that Kyrgios will find it within himself to start competing with full intensity and unbridled passion on a more regular basis. To be fair, he concluded 2014 at No. 52 in the Emirates ATP Rankings, and moved up to No. 30 in the 2015 year-end Rankings. Now he has climbed to No. 14 in the world, and he stands at No. 12 in the Race to London. He could conceivably finish 2016 as a member of the world's top ten, and that is where he belongs. But Kyrgios needs to follow the same line of thinking that is commonplace to all great players. Never be content. Strive to keep progressing. Learn from losses. Take big wins in stride.

If Nick Kyrgios can proceed decidedly in that philosophical direction, he could turn these next three to four years into a golden showcase for his growing capabilities.