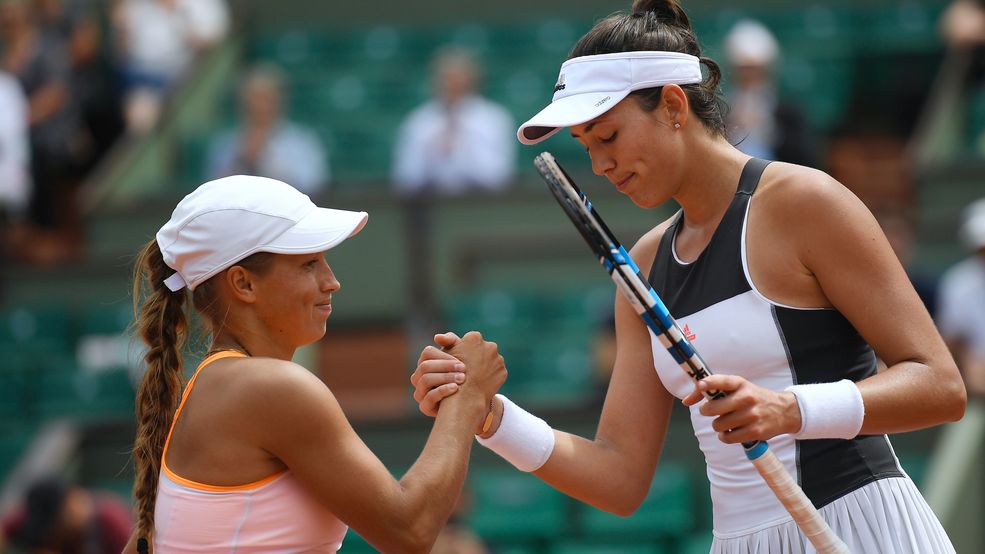 Consider the plight of Garbine Muguruza as she approached Roland Garros this year. The 23-year-old Spaniard came to Paris as the defending champion at this major championship, remembering well her extraordinary run through the 2016 fortnight which concluded with a final round triumph over none other than Serena Williams. That, of course, was a groundbreaking development in her career. Muguruza had come of age during that damp couple of weeks on the red clay. She demonstrated that her talent could take her just about anywhere she wanted to go in the world of tennis. A year earlier, Muguruza had made it in startling fashion all the way to the final of Wimbledon, losing there on the lawns to Williams at the All England Club.

That stretch was uplifting in many ways for Muguruza. She had gone to the title round in one major and then captured her first Grand Slam title, all in a relatively short period of time. Muguruza found herself ranked No. 3 in the world at the end of the 2015 season. Although she slipped to No. 7 at the conclusion of 2016, that was primarily a product of an understandable letdown after her breakthrough triumph at Roland Garros. I understood to some degree why it was a difficult proposition for Muguruza to rekindle her drive and inspiration the rest of the way last year. She was knocked out in the second round of both Wimbledon and the U.S. Open. Her heart and mind seemed decidedly diminished and, in the process, her game suffered immeasurably from an indifference that too often made defeat an inevitability.

I was almost certain that Muguruza would rearrange her priorities for the 2017 campaign and start playing the kind of tennis again that had captivated galleries from every corner of the globe in days gone by. But she has simply not been able to assert herself this season the way she would have wanted. In nine tournaments, her results have been less than stellar, although she had to retire in three matches over the course of the season. She advanced to a couple of semifinals in Brisbane and Rome but was unfit to complete her matches in the penultimate round of those tournaments. But she has not reached a final this year. All in all, it has not been a productive season for Muguruza. Nonetheless, she was seeded fourth this year at the French Open.

Muguruza opened her 2017 Roland Garros campaign with a comfortable win in straight sets over 2010 French Open victor Francesca Schiavone and then battled back from a deep deficit to defeat Anett Kontaveit 6-7 (4), 6-4, 6-2. That set the stage for a third round meeting today between Muguruza and Yulia Putintseva. I watched this one closely, hoping to see if there might be any clues to the current level of inner security in Muguruza at this critical stage of the tournament, with the first week drawing to a close. It had been difficult to gauge the form of the Spaniard as she headed into this confrontation with Putintseva, and I wondered: how she would look as she opened the program on the sixth day of the tournament?

Muguruza answered that question affirmatively. Her performance in this contest was her finest of the tournament. It was a morale boosting outing for the Spaniard, who came through in a tight first set and then moved close to the top of her game in dismissing Putintseva, a diminutive player in today's world of women's tennis. The 22-year-old from Kazakhstan stands only 5'4' and weighs 130 pounds, but she has largely made her presence felt on the circuit. That is why she was seeded 27th at Roland Garros. Her climb in the WTA Rankings has been steady, from No. 113 at the end of 2014, to No. 74 for 2015, to No. 34 in 2016, to her current residence inside the top 30.

Putintseva was not a player Muguruza could afford to take lightly. This was her first skirmish against another seeded participant, and a serious test. By and large, Muguruza passed that test comprehensively. She broke Putintseva in the opening game of the match, angling away a forehand crosscourt winner off a drop shot from Putintseva. But Putintseva broke right back for 1-1, employing a cagey short backhand chip to draw Muguruza in. The Spaniard was coaxed into a backhand error. Putintseva was relying almost entirely on defense and the drop shot, but her game plan was working. She held at 15 for 2-1 and then broke at 30 for 3-1, breaking the rhythm of Muguruza with high trajectory shots down the middle that were hard to handle.

The No. 27 seed had captured three games in a row. The momentum belonged to her. Muguruza knew it was time to assert herself, and she did just that. With Putintseva serving at 30-30 in the fifth game, Muguruza stepped in and took her backhand early, driving it down the line cleanly for an outright winner. She then drew an error from Putintseva to break back for 2-3. Reignited by that important break, Muguruza surged back to 3-3 with a hold at love, closing out that game with a service winner down the T and a forceful backhand down the line that provoked an error from Putintseva.

Now Muguruza went on the attack, putting away an overhead and lacing a backhand down the line winner to create a 0-30 lead in the seventh game. The stylish Spaniard broke at love for 4-3 and soon held for 5-3. She had taken four games in a row to put herself in a commanding position. But Putintseva refused to fold, holding at love in the ninth game. Serving for the set in the tenth game, Muguruza rallied from 15-40 to deuce but Putintseva caught her off guard with a sidespin backhand drop shot down the line. Muguruza got back to deuce again, only to miss a backhand down the line swing volley from close to the net. When Muguruza erred on a crosscourt backhand, the score in the set was locked at 5-5.

Putintseva was back in business, yet not for long. She double faulted at 15-15 in the following game and then missed a forehand down the line, smacking her racket on the court after squandering that point. Muguruza pounced, moving forward to snap a backhand down the line winner. She had broken for 6-5 in timely fashion. Down 0-15 in the following game, Muguruza swept four points in a row to take the set, playing with poise and purpose.

Relaxed after closing out the first set, Muguruza commenced the second on her own terms, breaking in the opening game with another scintillating backhand winner up the line, taking a two deuce game to move ahead 2-0, and then breaking easily for 3-0 with a deep shot setting up a winning forehand crosscourt. Muguruza had a two break cushion and a 3-0 lead. Once more, though, Putintseva diligently went to work and played with renewed conviction. She broke Muguruza and then held at love.

Serving at 3-2, still up a break, Muguruza held easily, and that set the stage for an inspiring conclusion to the match for the Spaniard. Putintseva served at 30-0 in the seventh game. Muguruza connected with a backhand down the line winner and followed with a forehand winner on the run off a drop shot from her adversary: 30-30. An immaculate forehand winner down the line lifted Muguruza to 30-40 and she gained the break with an aggressive return forcing Putintseva into a mistake. Muguruza had the insurance break again and a 5-2 lead. She closed it out handsomely, opening that final game with a service winner down the T, followed by a deep serve that created an avenue for a forehand winner, and then an ace down the T make it 40-0. Putintseva saved one match point with a forehand down the line winner but another ace down the T from Muguruza at 40-15 allowed the Spaniard to finish off matters with a flourish 7-5, 6-2.

And so Muguruza has moved on to the round of 16, and a compelling appointment against the Frenchwoman Kristina Mladenovic, who has been living dangerously but has somehow survived a pair of harrowing three set matches on her way to the fourth round. At the start of the tournament, I would have given Mladenovic the clear edge in that matchup based on the Frenchwoman's form during the recent swing of clay court events. At the moment, however, I look at that contest essentially as a tossup. It will be fascinating to follow, to discover which woman can respond better to the pressure.

Muguruza surely is determined to defend her crown. Mladenovic has never moved beyond the quarterfinals at a major and now is her chance to remedy that. My hope is that both women play with verve, give the fans an encounter to remember, and compete honorably from beginning to end. If Muguruza loses a hard fought and high quality match, she could leave Roland Garros feeling proud of herself and encouraged about where she is headed. If she triumphs, it just might be a victory that carries her all the way to the title.