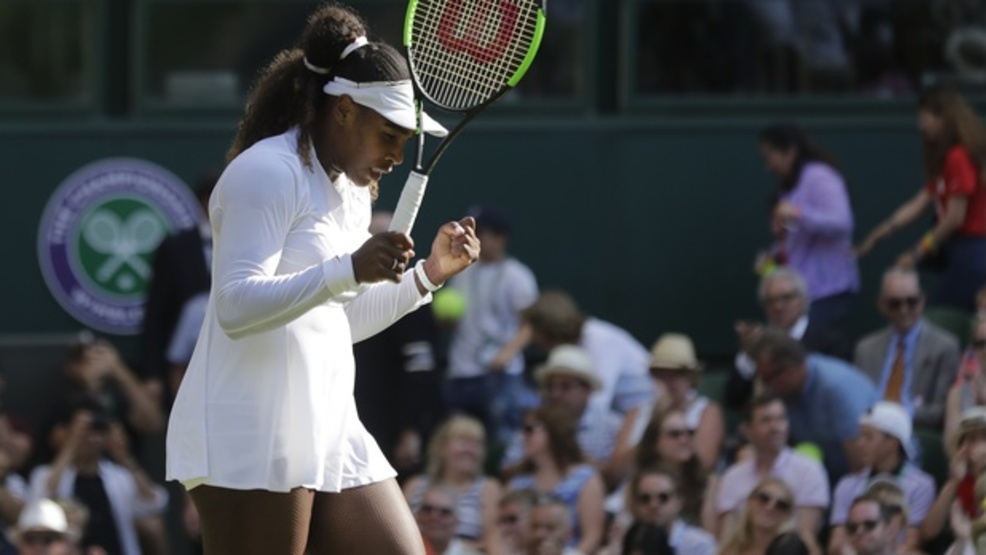 Steve Flink: Mladenovic Gave Serena a Challenge, but the Seven-Time Champ Was Ready

LONDON—As she approached this Wimbledon in a determined frame of mind, Serena Williams realized that she could not really know what to expect from herself. She had played with increasing efficiency and vigor across the first three rounds at Roland Garros, only to sustain an injury and be forced to withdraw before her round-of-16 appointment with Maria Sharapova. That nagging pectoral muscle issue harmed her preparation for the tournament she values above all others on the lawns of the All England Club.

Nevertheless, Williams did get a boost she had not counted on when she was seeded 25th here. That courtesy from the powers that be at Wimbledon enabled the 36-year-old American to avoid the danger of facing one of the highest ranked players in the world in the first or second round. She took full advantage of the situation, removing world No. 105 Arantxa Rus 7-5, 6-3, and ousting qualifier Viktoriya Tomova (ranked No. 135) 6-1, 6-4 in a second-round contest.

But not until today did Williams find herself up against a formidable opponent with the propensity to pull off an upset under the right set of circumstances. Serena took on world No. 62 Kristina Mladenovic in the third round, and the unwavering Frenchwoman gave the American just about all she could in an often-scintillating clash on the Centre Court. In the end, Williams came through 7-5, 7-6 (2), moving on deservedly to the round of 16, displaying her big-point prowess in the process.

Yet the fact remains that Serena could easily have lost the opening set—and might well have dropped the second set—had it not been for her pride and perspicacity. In the tightest corners of both sets, when the stakes were high, as the pressure escalated, Williams lifted her game decidedly and took matters largely into her own hands. She was behind 5-3 in the opening set and was down break point at 4-4 in the second, but at those consequential and seemingly trepidatious moments, Williams was not only confident but in full command of her mental and physical powers.

From the outset, Williams was given a thorough examination by an opponent who is decidedly better than her current status indicates. Last October, the stylish Frenchwoman reached a career best ranking of No. 10 in the world. At the end of 2017, she was No. 11. But her 2018 campaign has been filled with doubts and disappointments, despite winning the Australian Open doubles title. On her own, Mladenovic has not been able to find the magic that she had a year ago.

And yet, she did not perform today like someone who did not believe in herself or her chances. Mladenovic seemed once more like a top ten competitor, and Williams recognized the size of her task immediately. In the first game of the match, Serena was down 15-40 before sweeping four consecutive points to hold on for 1-0. She missed only one first serve in that brief but important span, but a certain tone had been established. Clearly, Mladenovic was undaunted by either Centre Court or an adversary who has won the singles title seven times.

The Frenchwoman was serving well and backing up her delivery capably. She held at 15 for 1-1 before Williams held just as easily in the third game. Mladenovic wasn’t swayed. She hugged the baseline behind her serve, kept Williams at bay, and imposed herself as frequently as possible. The 25-year-old held at love for 2-2 and then broke Serena at the cost of only one point in the fifth game. Mladenovic took her returns early, sent them back fast, and rushed Williams into errors.

Securing the break for 3-2 with an immaculate backhand down-the-line winner, Mladenovic was demonstrably composed and strategically sharp. Serving at 40-30 in the sixth game, Mladenovic sent a 114-M.P.H. first serve accurately down the T that Serena hardly touched. It was 4-2 for the Frenchwoman. She had taken 12 of 15 points to get there.

Holding serve remained arduous for a woman widely revered for having the best delivery in the history of the game. Down 15-30 in the seventh game, though, she dealt forthrightly with the situation, taking three points in a row for a crucial hold. An unswerving Mladenovic answered by holding at 15 for 5-3, closing that eighth game with a 117-M.P.H. ace down the T.

And so Serena was serving to stay in the first set, and she met that precarious moment magnificently, holding at 15, releasing a pair of aces in that game. Mladenovic served at 5-4, moving to 30-15 with an ace of her own. But, two points from sealing the set, she was halted in her tracks by the temerity of Williams. Serena employed a deep return to set up a forehand winner: 30-30. A deep shot from Williams drew an error from a compromised Mladenovic: 30-40. And then another exceedingly deep Serena return coaxed an error from Mladenovic.

Just like that, Williams broke back at 30 for 5-5 with a clutch sequence of points. She then double faulted for 15-30 in the following game, but swiftly made amends with three first serves in a row drawing return mistakes from Mladenovic. The Frenchwoman’s chipped forehand return was increasingly vulnerable, and the American picked on that side persistently.

Now the tables had turned. Mladenovic was serving to stay in a set she had twice been within two points of winning, and she drifted to 0-40, falling behind triple set point. She was implacable, however, serving an ace down the T, driving a backhand impeccably down the line for a winner, and inducing as backhand return error from Williams. It was deuce.

Serena’s mindset was unaltered. At deuce, she peppered away off both sides until she created an opening for a crosscourt forehand winner. At set point for the fourth time, she was the beneficiary of a double fault from the Frenchwoman, who went down the T and missed wide. Set to Williams, 7-5.

Momentum was fully with the American. She held at 15 with an ace for 1-0 in the second set, and broke in the following game. Williams had collected four games in a row to lead by a set and a break. The feeling grew among many learned observers that Serena was inexorably on her way to victory, and Mladenovic had lost her bid to topple the 23-time major champion.

Serving in the third game, Williams missed four consecutive first serves, and was broken at love on a double fault. Mladenovic then survived a three-deuce game and erased one break point on her way to 2-2. Obstinate and purposeful, she was very much back in the battle. Nonetheless, Williams remained self assured and resolute. She held at love for 3-2 with three unstoppable deliveries and an ace out wide. Mladenovic was in a 15-30 bind in the sixth game but came out of it impressively. A strong second serve drew a return error from Serena. Mladenovic followed with a backhand down-the-line winner and a well-placed serve down the T, holding at 30 for 3-3.

The tennis on both sides of the net was first class. In the seventh game, Williams was stretched to deuce but her response was to serve an ace at 119 M.P.H. down the T. Another excellent T serve took Williams to 4-3. Mladenovic retaliated with a love hold for 4-4, raising chalk with her unanswerable second serve at 40-0.

Now the two players proceeded to play a fascinating ninth game that was critical in determining the outcome.

Williams started with an ace and surged to 40-0, but a plucky Mladenovic garnered four points in a row from that juncture to earn a break point. Had she exploited it, Mladenovic would have been “in with a chance” as the British say. She would have been serving for the second set. But Serena was fortunate when Mladenovic dumped a second serve forehand return into the net. Buoyed by that moment, Williams blasted away on the next point from the backcourt and moved to game point with a forehand swing-volley winner. An ace carried Serena to 5-4.

The American’s escape in that ninth game should have left Mladenovic awfully deflated. Serving in the tenth game, she was up 40-15 and needed four game points before she could make it to 5-5. But make it she did as Williams erred on a backhand return long off a terrific first serve from the Frenchwoman.

And so it was 5-5. Yet Williams made it abundantly clear in the eleventh game that she was in no mood for the match to be settled in a third set. She held at 15 for 6-5 on her third ace of an excellent game, this one coming in at 117 M.P.H. down the T. Mladenovic seemed poised to bring about a tiebreaker when she got to 30-0 in the twelfth game, but consecutive double faults made it 30-30. She would eventually save a match point with a bold forehand winner behind Serena, and then held on for 6-6.

On to the fourth round she went, but where does Serena Williams go from here? Her next confrontation is against Evgeniya Rodina, the player who stopped No. 10 seed Madison Keys in three tumultuous sets. In my view, Rodina has almost no chance to salvage a set from Williams. Serena would then confront the winner of the Camila Giorgi-Ekaterina Makarova match in the quarters. It is hard to imagine Giorgi beating Williams on grass, but Makarova would have a decent chance.

If Williams advances to the semifinals, her most likely opponent is No. 7 seed Karolina Pliskova, and that would be a serving contest of a high order. I have some lingering doubts that Williams can win seven matches here and take the title this year, but those doubts are decreasing. With so many seeded players gone, with her self-belief growing daily, with her game coming around steadily, Serena Williams just might win this tennis tournament.