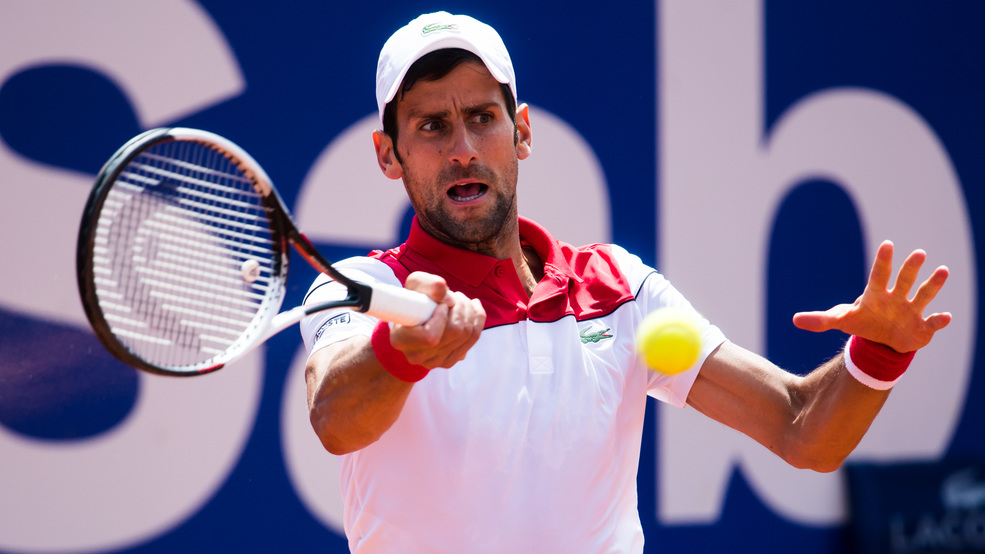 Steve Flink: Novak Djokovic Is Heading Back to the Top of Men's Tennis

There once was a time when Novak Djokovic—currently competing at the Rogers Cup in Toronto and looking to maintain his momentum after a gratifying win at the All England Club— seemed entirely capable of ruling the world of tennis as long as he wanted. Not that far back, he was controlling the climate of the game, imposing his will unswervingly and competing so ferociously that it took a monumental effort for anyone to stop him from being the best player of them all. The supremely athletic Serbian concluded both 2011 and 2012 at No. 1 in the ATP rankings, finished second behind Rafael Nadal in 2013, and then moved back to the top in both 2014 and 2015.

When he captured the French Open crown in 2016 to complete a career Grand Slam, and thus won his fourth major in succession, Djokovic seemed almost certain to finish a third straight season as the game’s greatest player. But, deeply distracted by personal matters, debilitated by growing issues with his right elbow, Djokovic won only one more tournament the rest of 2016 after securing six across the first half of that season. He ended his campaign by losing to Andy Murray in the title-round contest at the ATP Finals, and that setback in London was the skirmish that enabled the British player to overtake Djokovic at the last hurdle and wear the No. 1 champion’s robe for the year.

Djokovic was a wounded warrior in more ways than one, drifting into the deep waters of his mounting insecurity, no longer performing as exuberantly as he had almost always done throughout his career. With his elbow worsening and his pride significantly diminished, he played indifferently over the first half of 2017 and then closed his season down after Wimbledon. No one knew what to expect from him upon his return in 2018, not even the man himself.

Compounding his problems, Djokovic returned with the elbow still an issue before having surgery following a fourth round showing at the Australian Open. He was abysmal in early round losses at Indian Wells and Miami, simply a shell of his former self. Gradually, yet unmistakably, he found his range and recovered his old formidable multi-faceted game during the clay-court campaign, reaching the semifinals in Rome and making it to the quarterfinals at Roland Garros,

Despite failing to upend Marco Cecchinato in the last eight of the French Open, Djokovic went to the final on the grass at Queen’s Club in London and had a match point before losing to Marin Cilic. He then took his first major in two years, winning Wimbledon for the fourth time, overcoming Rafael Nadal in a five-set penultimate-round masterpiece, cutting down big Kevin Anderson in the final.

Now the revitalized 31-year-old is playing his first tournament since Wimbledon, and hardly anyone has noticed the fact that Djokovic has climbed all the way back to No. 10 in the ATP rankings and, more importantly, to No. 5 in the Race to London. The latter category reflects only points amassed in 2018 while the former covers a full 12-month cycle.

So Djokovic is not protecting any points at all as he heads into the summer, and marches on into the fall. Therefore, he will almost inevitably pass a lot of the players ranked above him by the end of the US Open, and even more over the course of the autumn. Traditionally, Djokovic has accomplished on a lofty level over the second half of the year because he has been the sport’s premier hard-court player of his generation.

At the Rogers Cup, for example, he has four times been the victor and once the runner-up between 2007 and 2016. Cincinnati is the lone Masters 1000 tournament he has not yet taken, but the fact remains that he has advanced to five finals there. At the US Open, Djokovic has been a pillar of consistency, garnering the title twice and reaching five other finals. In his last 10 appearances at the USTA Billie Jean King Tennis Center, he has never fallen short of the semifinals.

These are not superfluous numbers. They are proof that a healthy Djokovic has done a lot of his finest work down the stretch of many seasons. This year, he did not play many matches until Rome. That leaves him fresher than many of his chief rivals, and eager to assert himself in the months ahead. In my view, he will do just that. Examining the points accumulated thus far in 2018 by the top five players in the Race to London, Nadal is ahead of the pack with 5,760 points, followed by Alexander Zverev at 4,085, Roger Federer at 4,020 and Juan Martin del Potro at 3,530. Djokovic is not far behind Delpo at 3,355.

In my view, del Potro will only be an authentic contender for the year-end top spot if he at least reaches the final of the US Open. He has to be cautious about his scheduling. So the primary fight for No. 1 status should be among Nadal, Federer, Zverev and Djokovic. I am certain one member of that sparkling foursome will finish as the No. 1-ranked player in the world this year.

Nadal is in fine shape at the moment with a nearly 1,700-point lead over Zverev. But it will be crucial for the Spaniard to defend his US Open title, and that will be exceedingly difficult. He has been victorious on the hard courts in New York three times, but did not defend the title the previous two times he won the tournament. My view on Nadal is that he will be extraordinarily careful about his scheduling this fall because he was constantly hurt after winning Beijing and reaching the final of Shanghai last year. He did not finish a tournament he entered after Shanghai until he won in Monte Carlo on the clay this year.

As for Federer, he won’t overplay after New York, so he definitely needs his first US Open title since coming through in 2008 if he wants to attain the No. 1 ranking for 2018. He is not really that motivated to realize that feat. Zverev will be right in the hunt for the rest of the year, but can he finally reach his first semifinal at a Grand Slam tournament, or perhaps do better in New York? That might well be the case. He is dangerous and will surely finish 2018 with more gusto than he concluded the previous season.

Enter Novak Djokovic, who opens his quest for a fifth tournament win in Canada this week. He should be eager and confident after winning Wimbledon, and delighted to be back on his favorite surface. He could pick up a substantial number of points in Canada and Cincinnati combined, and then set his sights on a third US Open crown.

Djokovic does not need to win the US Open to put himself in a position to end this year at the top of the ladder, but he would boost his cause immensely by doing so. Even a final-round showing would be helpful to the Serbian. But the fact remains that he figures to keep accumulating points productively in other places. Across his career, Djokovic has put his name on 30 Masters 1000 trophies. A few more of those this year along with, perhaps, a triumph in London at the ATP Finals, would leave Djokovic in an enviable position.

As I see it, neither Nadal nor Federer will finish this year at No. 1, unless they win the US Open. Thereafter, the two icons will be thinking of preserving their bodies and resting their minds for the 2019 campaign. That is the way they must prioritize at this stage of their careers. Federer was enormously prideful about establishing himself as the oldest ever to reside at No. 1 in the ATP rankings earlier this year, but he would be making a serious mistake to overextend himself from here through the rest of the year. Nor will Nadal push himself as much as he did in 2017 to wrap up his season as the preeminent player in tennis.

The two men who will work the hardest to secure the honor are probably Djokovic and Zverev. After he lost to Borna Coric in the second round of the US Open last year, Zverev, who had high hopes of winning that title, faded in the latter stages of the year. I don’t see that happening again. But my feeling is that Djokovic will be the player who displays the most consistency over the rest of the season. He has played only 34 matches all year heading into Toronto today. He should get a lot done over the next three months. He can draw on his wide range of experience, and his champion’s vision. His hard-court game is awfully good when he is fit, focused and uncompromisingly driven to succeed.

I may be going somewhat out on a limb, but my pick for the 2018 year-end No. 1 player in men’s tennis is none other than Novak Djokovic.