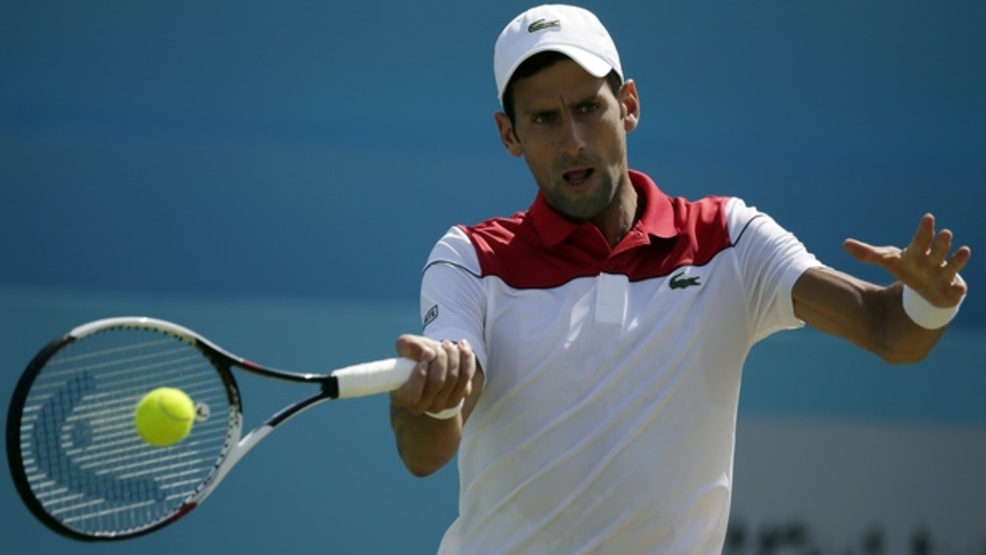 Steve Flink: Novak Djokovic Is on the Verge of Recovering His Zenith

After he startlingly lost in the French Open quarterfinals to Italy’s Marco Cecchinato, Novak Djokovic was in a state of utter despondency. He could not comprehend how that match got away from him in four sets. He wondered how in the world he had not advanced to the semifinals. He wished he could have been anywhere else than where he was at this gut-wrenching time.

And so Djokovic did something out of character. He decided to meet with the media in Interview Room Two at Roland Garros, rather than the larger and much more familiar Interview Room One. This was one of those press conferences he dreaded doing because his outlook was so gloomy and his mood so dark. His request to meet with journalists in a smaller setting was very deliberate, justified and understandable. He wanted to get this session over with as swiftly as possible. He was well below par emotionally, and as inconsolable as he has ever been after a hard defeat.

I was at that press conference, and it was painful to be a witness to Djokovic’s despair. He spoke much more softly than usual, answered questions robotically, leaned over the table as only a depressed individual could do, and totally lacked his customary verbal expansiveness. Even reporters who have developed an extraordinary rapport with the Serbian could not break through his bleak exterior.

At one point, Djokovic was asked to comment on the grass-court campaign ahead, and his plans to compete on the lawns. He muttered something about how he was not sure if he would play on the grass at all. He hardly looked up as he said that. Some reporters were stunned. Others did not know what to make of it. There was widespread speculation in the room afterwards about what it meant and how serious Djokovic was in making that comment.

I was convinced it was just a throwaway line from a player who simply was not capable of thinking clearly. His mind was muddled. His heart was broken, his spirit sorely diminished. But, sensibly and predictably, he soon pulled himself together, and announced a few days later that he would play the Fever-Tree Championships at London’s Queen’s Club.

Djokovic mowed down one opponent after another in an entirely productive week on the grass, cutting down John Millman, Grigor Dimitrov, Adrian Mannarino, and Jeremy Chardy without conceding a set to reach his first final since he won the Eastbourne grass-court tournament nearly one year ago. That string of triumphs lifted Djokovic into the final against a top-of-the-line Marin Cilic. He seemed poised to collect his first title of the 2018 season, breaking Cilic in the twelfth game of the opening set to win it 7-5. With Cilic serving at 4-5 in the second set, Djokovic advanced to match point, standing on the edge of an uplifting victory only eight days before the start of Wimbledon.

But that opening was erased in an instant by an unstoppable first serve out wide from the 6’6” Croatian. That was a bold delivery when the chips were on the line. Cilic held on for 5-5. The two staunch competitors soon landed in a tiebreaker, and once more Djokovic appeared to be in business. He led 4-1 in that sequence, three points away from a title he wanted wholeheartedly.

The 31-year-old was on the verge of a win that would have meant the world to him. But Djokovic was much too conscious of what he was doing, too aware of the score and the situation, too preoccupied with getting across the finish line. He had moved ahead of himself. Djokovic lost six points in a row as Cilic stole the set from him. The telling moment was Djokovic’s double fault at 4-3 in that tiebreak, when his ball bouncing before both his first and second serves was detrimental to his cause. He was so deliberate that he got in his own way and ruined the rhythm he had on serve leading up to that juncture.

Cilic deservedly proceeded to gain the win 5-7, 7-6 (4), 6-3. But despite cracking under duress in that tiebreaker, and failing to close out the contest, Djokovic had little to regret about his performance. He lost his serve only once in the match. He defended like a demon, like the Djokovic of old. He competed with quiet ferocity for the most part, and with demonstrable pride throughout the meeting.

Djokovic has every reason to consider this loss as another important step in the right direction as he strives to reestablish his supremacy in the sport. We must keep in perspective what has happened to this singularly athletic player since he captured his fourth major title in succession at the 2016 French Open. He finished that year unceremoniously. Roland Garros was his sixth tournament triumph of the still young year, but thereafter he faded and took only one more title the rest of the season, although he was a finalist at the US Open and runner-up to Andy Murray at the ATP Finals in London. That defeat against the British warrior cost Djokovic the No. 1 ranking for the year, a status he had enjoyed four of the previous five seasons.

No one knew it then, but Djokovic’s elbow issues had already surfaced. Across the first half of 2017, his difficulties did not diminish. He was upended in the second round of the Australian Open inexplicably by Denis Istomin in five sets. He lost to Dominic Thiem in the quarters of Roland Garros, virtually giving up in the last set of that 7-6 (5), 6-3, 6-0 loss. At Wimbledon, he retired after dropping the first set against Tomas Berdych in the quarterfinals.

By then, the elbow complications were apparent as Djokovic was often seen by trainers during different matches in the tournaments. His first-serve velocity had dropped significantly. It was clear that something was wrong. Djokovic shut down his season thereafter to rest his weary mind and ailing elbow, and did not return until the Australian Open at the start of the 2018 season.

Loyal followers of the Serbian hoped he would be revitalized, ready to make his presence known in a substantial way. But that was not the case. His elbow was still not right. Serving with an abbreviated motion clearly messed with his mind and made him a lesser player. On reputation and a refreshed psyche, Djokovic reached the round of 16, but his discombobulated serve was not nearly good enough to get him past Hyeon Chung. Djokovic fell in straight sets, and knew full well that he was not ready for a sustained run with his elbow remaining problematic.

Before he returned, Djokovic had a procedure on his elbow, but he was still not himself. He did not win a match at either Indian Wells or Miami, a pair of tournaments he had dominated over the years. Five times he had been the victor at Indian Wells, and on six occasions he had ruled in Miami, but this time around he was shockingly beneath his highest standards. This man who has been such an outstanding hard-court player was ushered out of Indian Wells by Taro Daniel and was beaten in Miami by Benoit Paire.

It was troubling to observe the 12-time major champion in the doldrums. He seemed disoriented, baffled by his own ineptitude, a player who paled in comparison to what he had once been.

And yet, as humiliated as he may have been, as much as he may have been disconcerted about his inability to make amends, Djokovic refused to surrender his ambitions. Once he got back out onto the red clay in the spring, Djokovic began to display an improved brand of tennis. In Monte Carlo, he got to the round of 16 with an impressive win over Borna Coric, losing in three sets to Thiem. He stumbled in his next two tournaments at Barcelona and Madrid, winning only one match combined in the two events, losing three-set clashes with Martin Klizan and Kyle Edmund. But he then seemed to rediscover his timing in reaching the semifinals of Rome with a sparkling win over Kei Nishikori, bowing out there to Rafael Nadal in a very well-played contest.

The strides he made in Rome carried Djokovic into Paris on a roll, and his quarterfinal run was not entirely a disappointment. Had he ousted Cecchinato, Djokovic would have collided with Thiem for the third year in a row at Roland Garros, and Djokovic might well have earned a third French Open final-round appointment against Nadal. It was not to be, but once he moved past his post-match desolation, Djokovic settled in on the British grass and had a productive week.

So how are we to assess Novak Djokovic now as he heads into the tournament that means more than any other in tennis? Can he significantly be a factor this time around after all of his struggles?

I believe he definitely can. Between 2011 and 2015, he secured the singles title at Wimbledon three times. He is the ultimate all-surface player when he is healthy and fully confident. Djokovic’s final-round appearance at Queen’s will serve him well at the All England Club. His game is largely back. The way he defended last week was stupendous. His return is much closer to what it once was. His footwork and mobility are looking good.

Above all else, the most underrated part of his game is functioning beautifully again. His service motion is once again smooth as silk. He is finding the corners regularly in both the deuce and ad courts. The location could not be much better. His astonishing speed, backcourt consistency, craftiness and match-playing prowess are back in order. At Wimbledon, however, the serve will determine more than anything else whether or not Djokovic gets to the latter stages of the tournament.

In the last analysis, Djokovic is going to make life uncomfortable for a lot of players on the lawns. Roger Federer is the man to beat; of that we can be certain. Rafael Nadal—who took the title twice and reached three other finals between 2006 and 2011—is long overdue to make a serious bid for the crown this year. Cilic demonstrated last year in reaching the final that he has the tools to succeed on Centre Court. Both Juan Martin del Potro and Sascha Zverev can be strong contenders, although Zverev looks beat up at the moment.

But, in my view, Djokovic is right up there near the top of the pack as a candidate to prevail on the Centre Court. He is increasingly close to revisiting the top of his talent. Some time over the next couple of months, no matter what it takes, as long as he remains free of pain, Djokovic will get back to that lofty destination in the hierarchy of tennis. He will settle for nothing less than that.