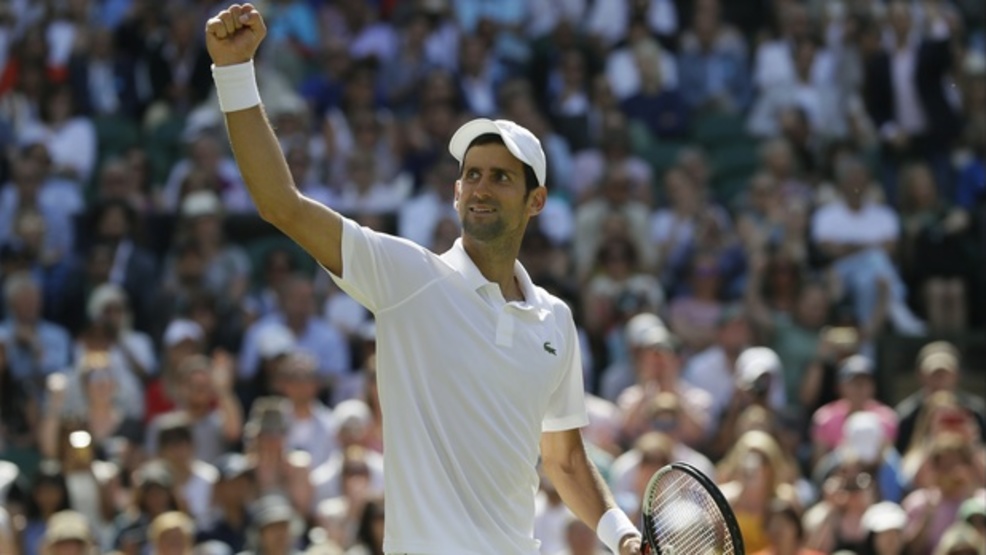 Steve Flink: Novak Is Back Where He's Wanted to Be—Competing for Grand Slam Titles

LONDON— Once upon a time, not very long ago, reaching the penultimate round at a major tennis tournament was not a particularly big deal for the estimable Novak Djokovic. This extraordinary athlete and prodigious tennis champion has secured 12 major titles across his sterling career. He won four Grand Slam championships in a row from Wimbledon in 2015 through the French Open of 2016. He had grown accustomed to settling for nothing less than the very best, to ruling masterfully in the tournaments that matter most.

But the past couple of seasons have been debilitating in so many ways for the 31-year-old Serbian. He lost his identity in some fundamental respects, starting with his loss at the All England Club to Sam Querrey in the third round two years ago. Last year, he did not play after Wimbledon as an ailing elbow kept him out of circulation. And this year, Djokovic commenced his comeback tenuously before starting to find his form during the spring on clay.

Now Djokovic is on a serious quest to remind not only himself but his wide legion of admirers that he can recover his winning ways and rekindle the spirit and fortitude that was such a central part of who he was when he resided at the top of the tennis world just a few years ago. Djokovic confronted Kei Nishikori in the quarterfinals on Centre Court today, and, after a comfortable start, he had to work his way out of a few precarious corners before he prevailed. In the end, however, Djokovic was the decidedly better player, dismissing the Japanese stylist 6-3, 3-6, 6-2, 6-2 for his first place in a major semifinal since he went to the title round against Stan Wawrinka at the 2016 US Open. Realizing that feat is no small thing for a man of stature who had, for a while, lost faith in himself.

This quarterfinal began largely on Djokovic’s terms. He had the upper hand in the early stages with his cleaner ball striking and sharper returns. After both players held comfortably in the first couple of games, Djokovic took his game up a notch, holding at love for 2-1 and then breaking Nishikori in the fourth game. With Nishikori serving at 30-40, Djokovic went to 3-1 with a deep inside-out forehand bouncing irregularly and drawing a mistake from his opponent.

He was off and running, but soon Djokovic was stopped in his tracks. At 15-0 in the fifth game, Djokovic was thwarted by a spectacular recovery from his 28-year-old adversary. Nishikori chased down a lob from Djokovic, who now had control of the point. The Serbian approached on the backhand of Nishikori, but a spectacular passing shot winner beat him coldly. Perhaps shaken by that shot, Djokovic played the rest of that game in the wrong frame of mind, double faulting it away to hand the break back to Nishikori.

Nishikori held at 30 for 3-3 with a backhand winner driven up the line impeccably. Having dropped two games in a row, Djokovic needed to reestablish his rhythm, and that is precisely what he did. The No. 12 seed held at 15 for 4-3, releasing three winners in that game. He then broke at 30 for 5-3 on an errant backhand from Nishikori and opened up a 40-15 lead in the ninth game. But Nishikori rallied gamely for deuce. Djokovic, though, was unswerving, sending an ace down the T at 121 M.P.H., following with a 120-M.P.H. first serve to the backhand that set up a penetrating crosscourt backhand. Nishikori was understandably drawn into an error. On his third set point, Djokovic had sealed the set 6-3.

Early in the second set, Djokovic seemed ready to press his advantage and perhaps start to pull away. He had a break point in the opening game but, after five deuces, a plucky Nishikori held on. With Nishikori serving at 1-1, Djokovic moved to 0-40, a triple break point opportunity awaiting him. Nishikori simply did not buckle, sweeping five points in a row for a critical hold. Djokovic advertised his agitation at the end of that game with the missed opportunity, and Nishikori was clearly revitalized by the escape.

In the following game, Nishikori made his move, breaking for a 3-1 lead as Djokovic netted a backhand crosscourt drop shot. The chemistry of the contest had been altered, and now Nishikori was dictating more than his share of points from the backcourt and largely keeping Djokovic at bay. Nishikori held at love for 4-1 and remained the more confident player off both sides from the baseline. He held in a deuce game to move up 5-2 and then had the three-time former champion down 0-30 in the eighth game. But Djokovic served his way unwaveringly out of that corner. Yet Nishikori was now impenetrable. He held at 30 in the ninth game, using a first serve to the backhand to open up the court for a forehand winner. Set to Nishikori, 6-3. It was one set all.

Unmistakably, Djokovic was wounded psychologically. He believed he should have gained the early break, but he had not cashed in on his chances. And so he found himself in essence starting a brand new match as the third set began. He held at love with four first serves including an ace at 40-0 to take the first game before Nishikori answered with a routine hold for 1-1. Djokovic poured in four consecutive first serves again to hold at love for 2-1, placing his serve exquisitely all through that game.

Nishikori knew he could not afford to lose the third set if he was going to find a path to victory. He wasted a 40-15 lead in the fourth game and faced a break point, but he saved it convincingly by yanking Djokovic around the court before putting away a forehand volley. On to 2-2 went the Japanese player, and soon he was poised to go up a break. Nishikori built a 0-40 lead on Djokovic’s serve in the crucial fifth game, but the Serbian met this propitious moment with a remarkable display of grit. A gutsy second serve at 0-40 led to a backhand-to-backhand exchange that went the Serbian’s way. A wide serve to the forehand enabled Djokovic to follow with a backhand crosscourt winner. Then Djokovic prevailed in an absorbing rally with a beautifully struck crosscourt backhand near the sideline coaxing an error from the Japanese fellow.

With that spirited stand, Djokovic was back to deuce. He would hold on his second game point for 3-2. Nishikori could feel the presence of a reinvigorated Djokovic. At 30-30 in the next game, the Japanese player missed a routine forehand into the net. Down break point, he erred off the backhand. Djokovic had taken a 4-2 lead, and he was not looking back. Four first serves found their mark in the seventh game. Djokovic held at love. He had surged to 5-2. Nishikori served to stay in the set in the eighth game, but Djokovic was not giving anything away. He broke at 15 to seal it 6-2, taking 10 of the last 11 points.

The match looked as good as over, but Nishikori managed to get an immediate break at the start of the fourth set. His lead did not last. Djokovic broke back easily at 15 for 1-1, moving forward behind a scorching shot to put away an overhead on the bounce. Back to 1-1 he was, and it was apparent that the Serbian did not think he could lose. He held at love for 2-1, broke Nishikori at 30 for 3-1, and held at 15 for 4-1. After dropping the opening game, Djokovic had swept 16 of 20 points. He had left Nishikori dazed and disconsolate.

Nishikori did hold on in the sixth game, but Djokovic was unrelenting now. Serving at 4-2, 40-30, he angled a forehand acutely, pulling Nishikori completely off the court. Djokovic sent a forehand down the line into a wide-open space, traveling to 5-2 behind that winner. Nishikori built a 40–15 lead in the eighth game, but he was a beaten and beleaguered man. Victory went deservedly to Djokovic, 6-3, 3-6, 6-2, 6-2.

Was this vintage Djokovic? Clearly not. But he profited in a multitude of ways from his skirmish with Nishikori. Djokovic had been taken to four sets only once in the tournament, coming from behind to oust Kyle Edmund in the third round. This time, facing the player who beat him to reach the 2014 US Open final, Djokovic was disillusioned after the second set slipped away from him. Nishikori—who walked on court with a discouraging 2-13 career record against the Serbian—challenged him tremendously at the outset of the third set, and if Djokovic had not held on in that 0-40 game at 2-2, he could have been in a heap of difficulty.

Instead, Djokovic played his best brand of tennis to win 10 of the last 12 games to achieve the triumph. It was a test well needed, a battle nicely fought and a victory thoroughly earned. Novak Djokovic is right where he has wanted to be for so long. He will play for a place in the final of the tournament he won in 2011, 2014 and 2015 on Friday. No matter what happens in his semifinal clash, Djokovic has done himself proud. He is indeed reminding himself of who he was and what he might still become. In my view, we are witnessing the remaking of a great champion.