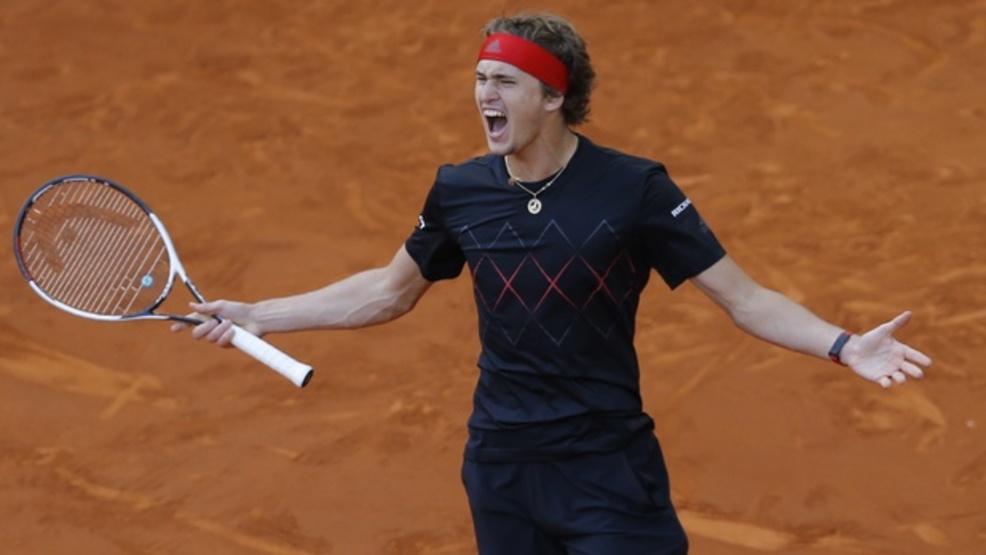 Steve Flink: With Rebound Run of Success, Zverev Is Ready to Challenge for the Top

Over the spring and across the summer of 2017, Alexander “Sascha” Zverev made many in the tennis cognoscenti unabashed believers in both his big game and vast potential. The 6’6” German captured a pair of Masters 1000 tournament titles in that span, striking down Novak Djokovic on clay in Rome, and upending Roger Federer on a hard court in Montreal, playing top of the line tennis on both surfaces. More than a few seasoned observers thought that Zverev might be ready for a substantial breakthrough at the US Open, but he suffered a bruising, four-set, second-round setback against Borna Coric.

In my view, that loss had lasting implications for this prideful competitor, leading to a deeply wounded psyche. He was not the same player through the rest of 2017 and during the early months of this season. But since he reached the final of the Miami Masters at the start of April, Zverev has recovered his confidence, rediscovered the art of winning at the highest levels of the game and brought back his swagger. This fellow is back where he wants to be.

Zverev has secured back to back titles on clay in Munich and Madrid over the last two weeks, winning nine consecutive matches, lifting his season record to 26 wins (the most on the ATP tour) against only seven losses heading into his opening-round match in Rome tomorrow against Italian wildcard Matteo Berrettini. Competing at peak efficiency this week may be next to impossible as he appears in a third consecutive tournament, but Zverev can only try to keep his winning streak going.

Let’s examine what Zverev has done these last few weeks. Against a respectable field in Munich, Zverev dropped only one set and excelled by imposing himself regularly down the stretch, finding his range off the ground with growing assurance. He toppled Hyeon Chung in the semifinals, avenging a third-round loss to the South Korean at the Australian Open in January. In the final, Zverev defeated Philipp Kohlschreiber, 6-3, 6-3. That was his first tournament triumph since Montreal in August, and it was a long time coming.

But Zverev’s title run in Madrid was decidedly more impressive. The field was much stronger than Munich. The stakes were higher. The challenge was significantly larger. Nevertheless, Zverev swept through the Masters tournament ruthlessly, casting aside John Isner, Denis Shapovalov and Dominic Thiem in his last three matches.

Isner had beaten Zverev in the final of Miami. The left-handed Shapovalov is a 19-year-old with an abundance of gifts and an unmistakable sense of self. Thiem owned a 4-1 career head to head advantage over the German. But Zverev was not the least bit intimidated by anything or anyone last week. He was never even pushed into a tiebreak.

Flourishing in a high altitude setting that speeds up the conditions and rewards aggression, determined to set the tempo and dictate on his own terms, more composed than he has been in a long while, Zverev was stupendous. In 48 service games and ten sets, he was never broken. He faced only one break point all week. This was unprecedented at a clay-court Masters tournament since records were first kept in 1991. The only player who had not lost his serve throughout a Masters tournament was Federer, who did it on fast hard courts at Cincinnati in 2012 and 2015.

I watched Zverev play from the quarterfinals on in Madrid, and he won more than his share of free points with piercing and accurate first serves. The quick conditions benefitted the German, to be sure, but most strikingly, it was the way he exploited the velocity and placement of his first serve— and the heavy kick on his second delivery—to take control of points swiftly that set him apart.

Thiem committed the cardinal sin of losing his serve at the start of both sets in the final, and he seemed to have the sinking feeling that his transgressions would be irrecoverable. The Austrian’s fatalist streak was more realism than pessimism. Break points were unavailable to him, and out he went, 6-4, 6-4. Zverev thus came away with his third career Masters 1000 title, not to mention a clearer sense of why he belongs among the elite and where he is going.

It is entirely possible that Zverev could shake up the status quo powerfully in the near future. He won five titles a year ago and finished the season at No. 4 in the world. Despite a less-than-stellar start in 2018, his remarkable surge lately has carried him to new heights. He currently resides at No. 3 in the ATP rankings, which operate on a 52-week cycle. That alone is a tall achievement, and a testament to his depth of ambition and wealth of talent.

But, the way I look at it, even more meaningful than Zverev’s rise to a career high at No. 3 in the rankings is his current status at No. 2 in the ATP Race to London. That is very relevant at the moment, because it counts only points garnered in 2018. The Race is a more accurate reading on current form, and how things may turn out at the end of the year. That is not to say that there is not a very big chunk of tennis that remains ahead of Zverev, including three more majors and five more Masters 1000s.

Currently, Federer is No. 1 in the Race with 3110 points; Zverev is in second place with 2535; Juan Martin del Potro is third with 2210 points, and Rafael Nadal in fourth with 2040. The dynamic left-hander from Spain could collect up to 3,000 points combined between Rome and Roland Garros, if he wins both tournaments. Doing so would skyrocket to No. 1 in the Race with 5,040 points, moving nearly 2,000 points ahead of Federer, who could then move back out in front (or close to it) with a strong grass-court campaign.

Zverev, however, will not be cast aside easily by either veteran icon. The German has demonstrably proven he can play on any surface. The view here is that Zverev is at his very best on hard courts, but he may be only marginally superior on that surface than he is on clay. Twice he has been to the final of Halle on grass. He is a versatile player who has the patience to succeed on clay, the power to thrive on hard courts and the agility and athleticism to be a force on grass.

Above all else, he must be regarded now as one of the best three of four servers in the sport—one of the chief reasons why he has moved up very close to the top of the tennis ladder. On top of that, his backhand just might be the finest of them all. His two-hander is almost technically impeccable, and no one flattens out a crosscourt backhand and accelerates the pace better than this man with the sweet timing. The serve and the backhand have made him who he is—a great champion in the making with the right mindset and the skills to get him just about anywhere he wants to go.

And yet, proximity to the top, and actually establishing preeminence, are two distinctly different things. The key for Zverev will be rectifying his disappointing record thus far at the four Grand Slam tournaments. In fairness, he has played only eleven Slams, and has yet to advance beyond the fourth round.

Zverev is better than that, and he knows it. But we too easily forget that this arresting player just turned 21 last month. He needs time to grow into his talent, to wed his shotmaking skills with his match-playing propensity, to figure out what it takes to win on days when things are not going his way. In some cases, he has probably been excessively driven to succeed, and that has led to preventable failures. For example, how could he win only five points in the fifth set of his clash with Chung this year at the Australian Open? That is inexplicable.

Be that as it may, Zverev is a consummate professional. He knows that the pace setters, Federer and Nadal, were simply good for everyone else in 2017, dividing the four majors between them. He realizes that he was not ready until the US Open last year to consider himself a viable candidate to win a Grand Slam event. His outlook now has surely been sweepingly altered. Elite players often make serious progress in their early twenties, or sometimes sooner. That is when they often start collecting prominent trophies.

Pete Sampras got on the board at the US Open in 1990 when he was only 19, becoming the youngest man ever to prevail in that major. Nadal was only 19 when he took his first French Open title in 2005. Federer was still 21 when he won his first of the premier prizes at Wimbledon in 2003. Zverev surely wants to garner a big one soon, preferably this year.

I believe he will win either Wimbledon or the US Open this year, more likely the latter. I can’t envision him not concluding 2018 among the ATP Top 3. Federer is understandably concerned with the preservation of his body as he approaches the age of 37. He will not overplay over the second half of this year, nor will the equally sensible Nadal. Del Potro is picking his spots carefully to avoid wrist issues.

Zverev will need to reach the latter stages of the three upcoming majors to keep himself in the hunt for supremacy. He has to avoid some of the mood swings that have hindered him periodically. A realistic goal is three or four more tournaments between now and the end of his season.

At the very least, Zverev will be a strong contender for No. 1. Perhaps he even will be standing alone at the top when the curtain closes on the 2018 campaign.