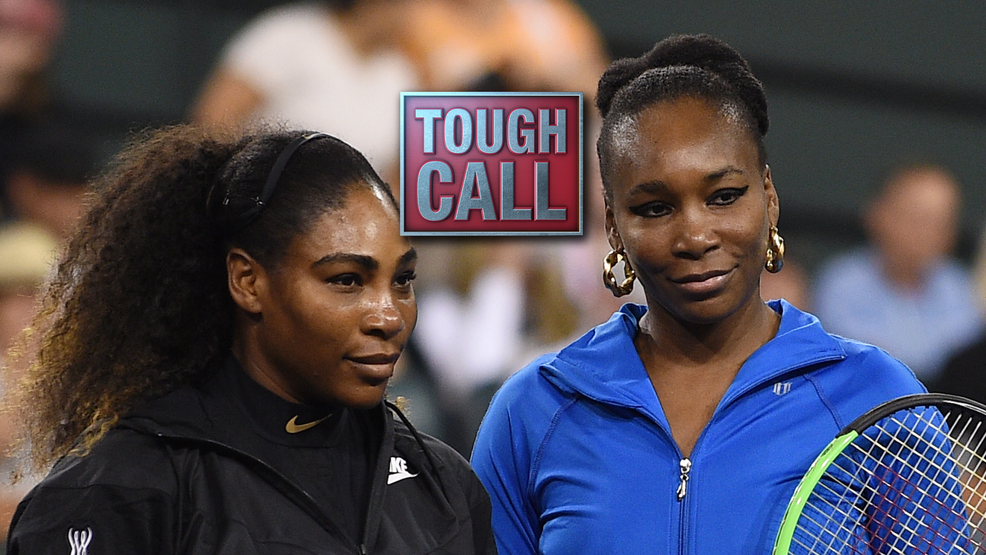 Tough Call: Who Is More Likely to Win One of the Remaining 2018 Slams - Venus or Serena?

Here is this week's edition of Tough Call. Who is more likely to win one of the remaining 2018 Slams - Venus or Serena?

Three Reasons Venus Is More Likely Than Serena To Win a Major This Year:

~ She’s been playing some of her best tennis at Majors lately: Venus lost first round at the Australian Open this year, but before that she’d reached the second week at seven Majors in a row - and the semifinals or better at three of the four Majors last year.

~ She’ll have much better draws: If she can maintain her spot in the Top 8, Venus will be able to avoid her fellow Top 8 players until at least the quarterfinals of Majors.

Three Reasons Serena Is More Likely Than Venus To Win a Major This Year:

~ She always plays her best tennis at the Majors: Her first two tournaments back may not have gone as well as some expected, but once she gets to a Major, Serena comes alive - she’s won 23 of them, more than any other player, male or female, in the Open Era.

~ She’s a three-time French Open champion: She’s won Roland Garros - the next Major on the calendar - three times, more than any other active player on the women’s tour.

~ She’s got a lot of extra motivation: Beyond showing the world she can win a Major as a mom, Serena’s also got history in her sights - she’s just two Majors away from setting the record for most Majors in tennis history (Margaret Court has the current record with 24).

ED MCGROGAN: SERENA
As consistent as Venus has been at the majors in recent years—she's reached the semifinal round at four of the last six, plus two finals—she has invariably come up short. Her Slam defeats have run the gamut of competitiveness, but at the end of the day, she simply hasn't been able to close. While Venus' current form is superior to Serena's, I would still bank on the youngster Williams finding a way to get it done.

JOEL DRUCKER: VENUS
The mix of Venus’ impressive play and Serena’s rustiness makes this question exceptionally challenging. First, it’s tough to see either this year meeting the demands of Roland Garros and winning there. But can Serena get enough match play under her belt to be sharp enough by Wimbledon? Then again, she’s repeatedly proven that she can play her way into form and win big. I think each sister can win a Slam this year, but will say that Venus has a better shot at Wimbledon.

ZACH COHEN: SERENA
She definitely isn't looking great right now, but I'm still going with Serena. It was never fair to expect that she'd step on the court and immediately contend for titles after the lengthy layoff, but she should improve as time passes. She'll play her way into better shape over the next couple of months, and I see her being a real force at both Wimbledon and the US Open.

NINA PANTIC: VENUS
It's Venus' turn. Though she somehow hasn't won a title since February 2016, she certainly has been playing like a Grand Slam champion. The 37-year-old is taking care of business and still proving to be one step ahead of her much younger opponents. Little sister Serena has always been her biggest obstacle in draws, but that will not be the case this year. Serena has had a very slow start to her comeback and even lost to Venus in straight sets in Indian Wells. There's no reason Venus can't add one more major to her illustrious career.

STEPHEN TIGNOR: SERENA
Venus is close to her best right now, while Serena is well off hers. But Serena has won more than three times as many majors as Venus for a reason—her ceiling is higher. She still has two months to reach it.

STEVE FLINK: SERENA
Serena is much more likely in my view to win one of the three remaining majors than Venus. Venus had a remarkable 2017 and surprisingly made it to two finals at the Grand Slam championships, as well as the US Open semifinals. I don’t see her back in a final this year at Roland Garros, Wimbledon or the US Open. Serena should be turning the corner by Wimbledon, and will be dangerous there on the grass. At the US Open, I believe she will be peaking again. Serena will have a good chance of capturing her seventh singles title on the hard courts in New York, and that would give her a 24th Grand Slam tournament singles title, allowing her to tie Margaret Court for the all time women’s record.

ASHLEY NDEBELE: SERENA
It might take Serena a little while to reclaim her good form, but my money is on her. The way Venus is playing right now, there’s a chance she’ll win another Slam before she retires; however, I believe Serena has a stronger chance of winning one this year if she’s motivated enough, which I believe she is. Tying or passing Margaret Court's 24 Majors should drive her to win one of the remaining three Slams.

About Tough Call:In Tough Call, our TC Live panelists debate the toughest questions in tennis. Is Roger Federer or Rafael Nadal the GOAT? Who would win between 2007 Serena Williams and 2017 Serena Williams? On court coaching - yes or no? Tennis is a competitive, one on one sport. In Tough Call our experts debate - and our viewers decide who wins.