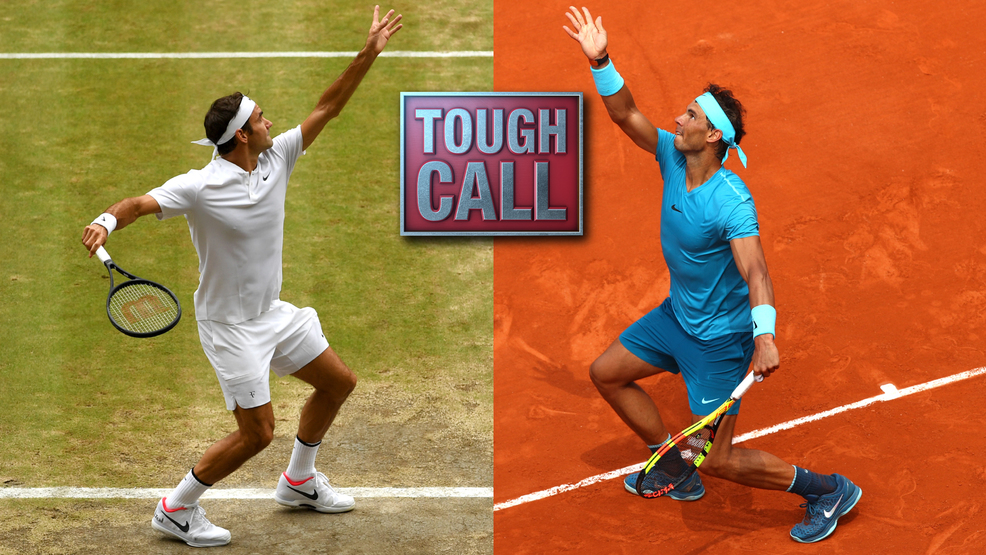 Tough Call: Who Would You Take: Federer on Centre Court, or Nadal on Chatrier?

Here is this week's edition of Tough Call. For your life, who would you take: Federer on Centre Court, or Nadal on Chatrier?

STEVE FLINK: Nadal
Both Federer on grass and Nadal on clay are unassailable. But I would pick Nadal on Chatrier over Federer on Centre Court. In his eleven triumphant years at Roland Garros, Nadal has never lost a final. Federer has won Wimbledon eight times but he has been beaten in three finals, once by Nadal in 2008 and twice by Djokovic, in 2014 and 2015. So Nadal's invincibility on his favorite stage is even greater than Federer's mastery on the grass.

ZACH COHEN: Nadal
As great as Federer has been on Centre Court, I have to take Nadal. Despite the absence of Federer, Andy Murray and Stan Wawrinka, this year's French Open showed just how much better Nadal, at 32, is than the rest of the competition on clay. He lost just one set in the entire tournament.

JOEL DRUCKER: Nadal
The entity that dare take my life is a beast. Federer is a genius, a tennis god. For this task, I don't need a god. I need a warrior. The stakes are high, the opposition savage. None more than Nadal will scrape and claw on my behalf with such unbridled tenacity—anywhere, and certainly even more so on the dirt. Message to Satan: what have you got?

STEVE TIGNOR: Nadal
Federer is 91-11 at Wimbledon, and is likely the best grass-court player ever. But Nadal is even better at the French Open. He's 86-2, and 11-0 in finals. A big server or a hot hitter could potentially take Federer out on grass—see Tomas Berdych in 2010 or Jo-Wilfried Tsonga in 2012. That doesn't happen to Rafa over best-of-five on clay.

NINA PANTIC: Nadal
On their preferred surfaces, Nadal is three Grand Slam titles ahead of Federer—with 11 at Roland Garros to Federer's eight at Wimbledon. He’s also a few years younger. It's the safer choice, especially given how dominant Nadal is on a surface that stretches for a longer part of the season. It's not Federer's fault that the grass season is so short, but it does make the outcome of lawn matches sometimes as unpredictable as the bounces.

ED MCGROGEN: Nadal
“Try my best” as I can, I can’t think of a compelling reason to pick against a player who has won nearly 98 percent of his matches at Roland Garros. But what if the question was this: for your life, would you rather take Federer on clay or Nadal on grass? That’s a tough call. Let me know your thoughts below, but I might go with Federer there, even with two years away from the slow stuff.

ASHLEY NDEBELE: Nadal
I would take Nadal on Chatrier without hesitation because of his remarkable 86-2 win-loss record. In his 13 appearances at Roland Garros, the Spaniard has won 11 titles, making him a sure bet. Federer, on the other hand, has won eight Wimbledon titles in his 19 appearances. Though he is considered the best grass-courter of all time, he hasn’t dominated at the All England Club the way the way Nadal has in Paris.