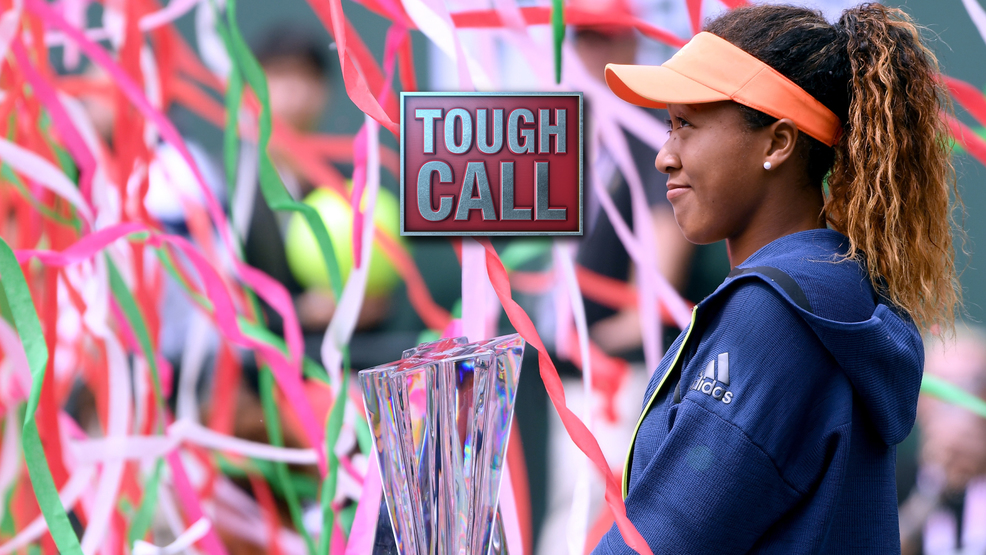 Here is this week's edition of Tough Call. Will Naomi Osaka qualify for the WTA Finals Singapore?

Reasons Naomi Osaka will qualify for the WTA Singapore Finals:

Reasons Naomi Osaka will not qualify for the WTA Singapore Finals:

~ Her week-to-week consistency isn’t quite there yet: Apart from Indian Wells, Osaka has fallen before the quarterfinals at four of her other five tournaments this year (her only other quarterfinal came in Dubai). She may change that in Charleston this week.

NINA PANTIC: YESShe's got all the tools to reach the Top 8, some serious momentum, and she has proven that she can beat virtually anyone. While she may suffer a slight slump during the clay-court season, her heavy game will do wonders on grass this summer and hard courts this fall. Then she'll head to Asia where she'll be a local favorite. There's no limit to how far Osaka can go, especially this year while she's still so fresh and free from the pressure of defending significant points.

JOEL DRUCKER: NO
The Top 15 is attainable, but the Top 8 is a bit far. Osaka only had four match wins at Roland Garros, Wimbledon and the US Open last year. If she can do something like reach a quarterfinal at one major and snap up another tournament title she can certainly come close to the Top 8. But the mountain is pretty steep at that stage. Still, she is a compelling, fast-rising player, and I could easily see her getting there in 2019.

ZACH COHEN: NO
Osaka is one of the stories of the 2018 season thus far, but I'm still waiting to see some more consistency from her. Her victory in Indian Wells was impressive, but she turned around and had a relatively quick exit in Miami (despite defeating Serena Williams in the first round). It takes a lot to be able to perform every single week, and I think her youth might catch up to her. I do, however, think she'll be right on the outside of the Top 8, and her future is as bright as anyone's.

ED MCGROGAN: YES
Last year Caroline Garcia finished 8th in the WTA Championships Race with 3,795 points. Osaka has already accumulated 1,466 points, not including her finish in Charleston. As Nina pointed out, she’ll likely play plenty of tournaments in Asia at a time of year when many top players curtail their schedules. Osaka will likely need to win another tournament, but her current ranking of No. 21 will give her all the main-draw entries she can ask for. It will close, but I think she gets it done.

ASHLEY NDEBELE: YES
With her Indian Wells win, Osaka has found herself in the running for one of the coveted eight spots in the WTA Finals. She will likely not gain any major points during the clay-court swing but should pick up some momentum during the grass-court and summer hard-court seasons. She’s beaten big names this year, which should help her to perform well in Wimbledon and the US Open. She will likely pick up another trophy or two before the end of the year, which will add to her year-end points.

STEVE TIGNOR: YES
Osaka is No. 21 now, which gives her a ways to go by the end of the year. She'll probably go through ups and and downs during the season, but having lost in the first round at the French Open and the third round at Wimbledon and the US Open in 2017, she'll have opportunities for big points gains.

STEVE FLINK: YES
I believe it will be a close call, but Osaka will qualify for the WTA Singapore Finals. That will surely and increasingly become a target for her as the season progresses. She will see that this goal can be within her reach. Much will depend on strong showings at the majors. I believe she will be a serious contender at both Wimbledon and the U.S. Open. Moreover, Osaka has the determination, aggression and confidence to win at least two or three more titles on the WTA Tour this year. She demonstrated in winning Indian Wells that she is a front line player. There is no reason why she can’t replicate that form at other big tournaments.