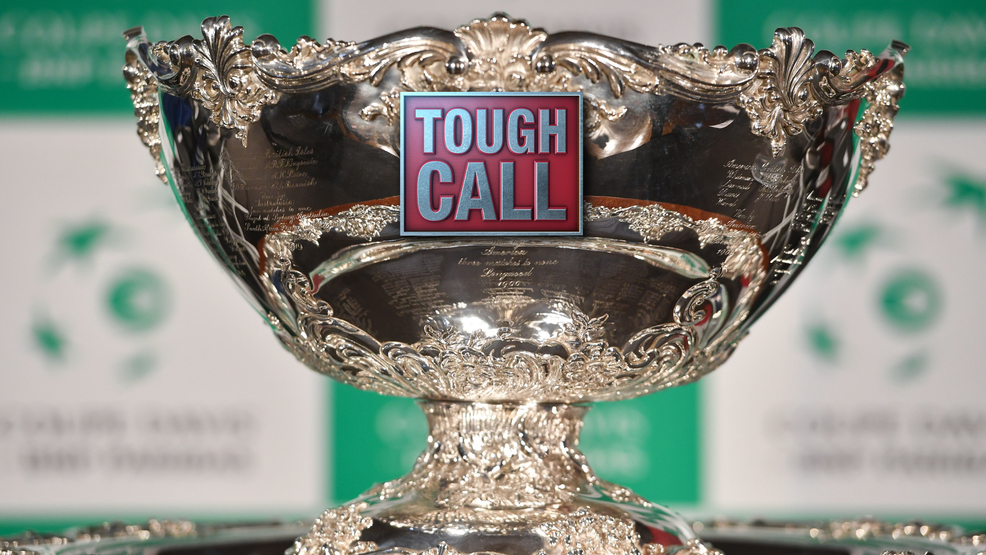 Tough Call: Is the ITF Going Too Far with Proposed Davis Cup Changes?

Here is this week's edition of Tough Call. Is the ITF going too far with their proposed Davis Cup changes?

Here Are the Proposed Changes:

~ The launch of an open bid process to assess fixed host cities for the Davis Cup and Fed Cup by BNP Paribas Finals – a model used by events including the UEFA Champions League Final, Superbowl and European Rugby Champions Cup.

~ A full industry consultation on scheduling alternatives for the 2020 season.

~ A review of current match formats used in Davis Cup by BNP Paribas, particularly the current best-of- five-sets approach and scheduling requirements during the week.

~ An extensive feasibility study, by the newly created Davis & Fed Cup Taskforce, of format changes below World Group to better support and encourage involvement in both Davis and Fed Cup - particularly by developing tennis nations, and to further increase worldwide interest and viewership.

~ A full assessment of current staging options for host venues and cities.

~ A review of Junior Davis Cup and Fed Cup including the potential benefits of introducing new age group events.

STEVE TIGNOR: YES
This is a very tough tough call, and if the new deal does go through, I hope I'm wrong to be skeptical about it. I can understand the desire to have the competition over one week, and I can definitely understand the lure of the money involved, which would at least theoretically go to growing the game at the recreational level. And if all of the top players participate, it could be a tremendous event. But we don't know how many will; what we do know is that Davis Cup will lose it's most distinctive and appealing aspect: home matches, in front of a partisan and raucous crowd. What will the atmosphere be like at a neutral site in Asia, thousands of miles from most of the nations playing?

Like I said, I hope that someday I sound too conservative about this, but I like Davis Cup as it is now, with all of its archaic flaws. The Big 4 may only be part of it sporadically, but most of the rest of the game's best male players participate now; it still means enough for them to do their best to win it at least once.

ED MCGROGEN: NO
In the same week that Davis Cup proposed a makeover that would render the age-old version of the competition unrecognizable, the National Hockey League's New York Rangers gutted their current roster with trades. To fans of both, the changes were extremely painful—but ultimately necessary. Davis Cup could have survived, but not thrived, in its meandering, season-long structure; the Rangers could have chased the Eastern Conference's last playoff spot, only to run into a far superior team in the playoffs if they actually reached the postseason. In both situations, the smarter longterm move was to tear it down and start anew. Each had their limitations, and each needed to do something drastic to keep up with the competition. In the case of Davis Cup, that means the threat of an ATP-driven World Cup, Laver Cup and, quite frankly, non-tennis diversions.

There are aspects of the "new" Davis Cup that will be hard to swallow, particularly the lack of home and away ties. But in the sport's eternal search for a fifth Slam, a one-week gathering of the world's greatest players for team competition is a strong contender. It's the kind of foresight that the Rangers can only hope to emulate.

NINA PANTIC: NO
Davis Cup has been needing an overhaul for a long time, and in this case, doing too much is better than doing too little. The biggest stars of the game haven’t prioritized Davis Cup on a regular basis for many, many years—these sweeping changes may change all of that. It’ll be far easier for fans to get excited to watch when all of the action is condensed into one week, as well as significantly easier for players to include the patriotic team event in their packed schedules. This will be an event no one will want to miss

ZACH COHEN: YES
I really like the idea of condensing the Davis Cup into one week, but I'm not a fan of the way the event is re-branding itself. Both hockey and basketball have tried to emulate soccer's World Cup, and both sports have been unsuccessful in capturing the public in the same way. It's become clear that the World Cup is the World Cup because of soccer itself. So while some of the proposed changes could help the Davis Cup, I'm not sure the ITF should be expecting only positive things from this reboot.

ASHLEY NDEBELE: NO
I think this is one of the best ideas ITF has come up with in a long time, and it has been long overdue. This revamp will give the event the much-needed facelift. Top players have voiced their complaints in the past regarding the Davis Cup schedule, and I’m sure they will welcome this revamp. Roger Federer’s inaugural Laver Cup became an instant success, partly due to the format of an annual world event played in one week. I commend ITF for emulating this format.

STEVE FLINK: NO
The ITF should be applauded for their proposed Davis Cup changes. For too long Davis Cup has lost luster by being held at different stages of the year. Fans have had great difficulty following it. I am totally in favor of what they are planning. A one-week time frame at a single location will raise the prestige of the competition and benefit both the players and devoted followers of the sport who want Davis Cup to be more deeply appreciated. Best-of-three set matches will protect the players. I am looking forward to it immensely.

About Tough Call:In Tough Call, our TC Live panelists debate the toughest questions in tennis. Is Roger Federer or Rafael Nadal the GOAT? Who would win between 2007 Serena Williams and 2017 Serena Wiliams? On court coaching - yes or no? Tennis is a competitive, one on one sport. In Tough Call our experts debate - and our viewers decide who wins.

This Week on Tennis Channel Plus Week of 2/26

- Watch all the action from the Mexican Open on the Tennis Channel App starting February 26 at 5:00 p.m. ET, including extended coverage of three outer courts only available on Tennis Channel Plus.