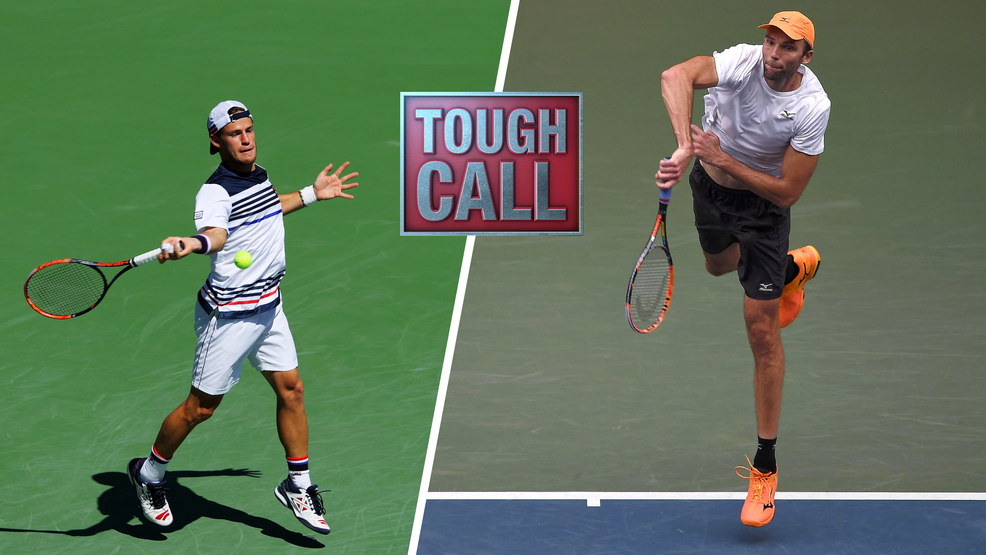 Here is this week's edition of Tough Call. If you wanted to be a professional tennis player, would you rather be 6’11” or 5’7”?

Three Reasons You Would Rather Be 6'11":

~ First-Serve Points Won: When it comes to winning the point on their first serve, the entire Top 15 on the men’s tour over the last 52 weeks are 6’ or taller (you have to go all the way down to 5’ 10” Marcos Baghdatis at No. 16 on the list for anyone below 6’).

Three Reasons You Would Rather Be 5'7":

~ Returns: The shorter players in the men’s game compete better with the taller players on the return - in terms of return games won over the last 52 weeks, four of the Top 10 are under 6’ tall (Diego Schwartzman, Damir Dzumhur, Kei Nishikori and David Goffin).

~ Speaking of Schwartzman, at the US Open last year, the 5’ 7” Argentine became the shortest man to reach a Major quarterfinal since the 1994 US Open (Jaime Yzaga). He’s currently ranked a career-high No. 23 and on the verge of breaking into the Top 20.

~ Simona Halep: The Romanian, who is 5’ 6”, has spent every week since the end of last year’s French Open ranked in the Top 2, including 16 weeks at No. 1. And a lot of players close to her height have reached No. 1, too - Chris Evert and Justine Henin among them.

NINA PANTIC: 6'11"
While life (and airplane travel) can be tough for the extremely tall, playing tennis is a lot easier. Players like Karlovic and Isner have nearly impossible to return serves thanks largely to their advantageous height. They’re also benefiting from greater reach, which is made most obvious when they come to the net. While fast footwork and getting low is harder for the tallest players, their ability to throw down power and cover the court with ease makes up for it tenfold.

STEVE FLINK: 6'11"
I am very conflicted on this one. The sport is moving increasingly in the direction of tall players, but clearly 6’6” is preferable to 6’11” in terms of court coverage. The diminutive players like 5’7” Diego Schwartzman can succeed significantly and they are much more mobile than the bigger competitors.. Ultimately, though, I would prefer being 6’11” if I was playing professional tennis today because it is such a distinct advantage on the serve.

ED MCGROGAN: 5'7"
John Isner's accomplishments over the last decade are a mere footnote in this exquisite era of men's tennis, but they've truly been impressive. The giant American has maintained a position in the Top 20 and can beat anyone in the world. But for all his progress, Isner has never won a Masters 1000 title, and he has never reached a Grand Slam semifinal. He has shots no one else hit, but he lacks the versatility needed to prevail over the course of the biggest tournaments. A shorter player has plenty to overcome, but ironically, has a higher ceiling.

ASHLEY NDEBELE: 6'11"
These days tennis matches can be physically demanding (especially during Grand Slams where men play best of five sets), and so having the ability to earn free points on the court is always a great advantage. Even though they lack court speed and their return game isn’t their best weapon, tall players such as Karlovic, Isner, and Cilic can easily bail themselves out of trouble by hitting big serves. Also, because of their long reach, it’s hard to pass or lob tall players.

ZACH COHEN: 6'11"
While it's not necessarily ideal to be either 6'11'' or 5'7'' in tennis, I'd take my chances with the extra height. Serving is such an important part of the game that one could pretty much win a match just by holding their own the entire time. And most of the bigger players on the tour have a big serve. Court coverage is also a big factor here.

STEVE TIGNOR: 5'11'
You can't hold your serve as easily as someone 6'11", but the game looks more fun at 5'7", and most of it comes much more naturally. You get to run and rally, instead of trying to do as little of both as possible.