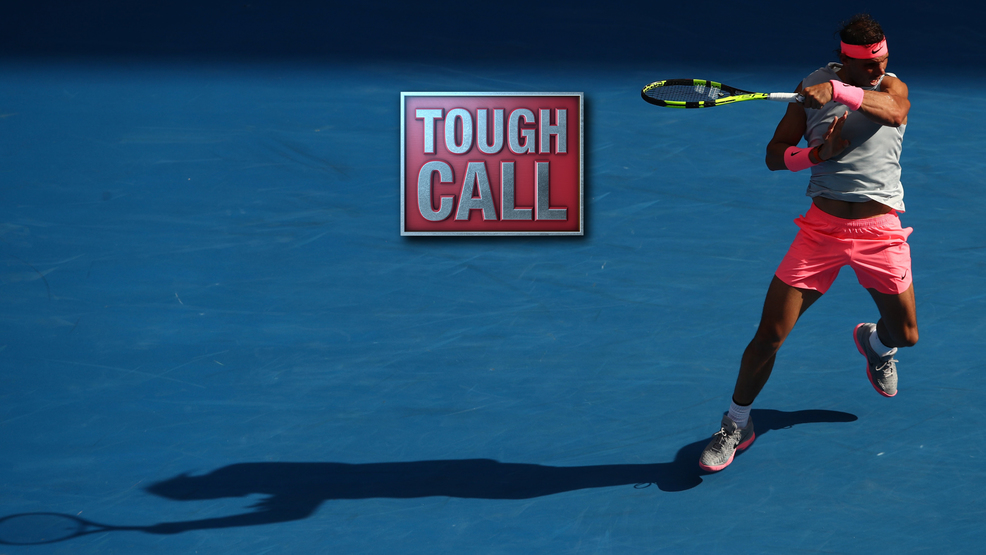 Here is this week's edition of Tough Call. Who is the best lefty in sports right now? Is it Rafael Nadal, Lionel Messi, Clayton Kershaw, or James Harden?

There's also Lionel Messi, who's often considered the best soccer player in the world and one of the greatest of all time, Clayton Kershaw, who's been described as the best pitcher in baseball, and James Harden, one of the biggest names in basketball right now.

I must put Nadal at the top of the list as the best lefty athlete in all of sports. His enduring excellence is the reason why I believe he surpasses everyone else. He has won 16 majors, second only to Federer among the men. He has been a model of consistency. And in my view tennis is the most demanding sport athletically of them all.

NINA PANTIC: Rafael Nadal
It is nearly impossible to compare athletes across different sports, particularly when those sports are both team-based and individual. But in this case, the winner is clear—Nadal—because he uses his left-handedness so well. Rafa relentlessly breaks down right-handed players' backhands and, although his serve isn't the fastest or flashiest, he serves to the exact spots that allow his forehand to take control of points. Adding to his status as living legend, the 16-time Grand Slam champion is a natural righty.

ZACH COHEN: Clayton Kershaw
Nothing against the brilliant careers of Nadal or Messi, but the best case can be made for Kershaw. (Harden is excellent, too, but he hasn't had the long-term success of the other three.) Despite his struggles in the postseason, Kershaw's earned run average (ERA) hasn't touched 3.00 since his rookie season. In six of the last seven Major League Baseball seasons, he’s had an ERA of less than 2.50. When the Los Angeles Dodgers give him the ball, the team is expecting a win. It's a fascinating amount of pressure to deal with, but he has had no trouble remaining practicably un-hittable.

ED MCGROGAN: Lionel Messi
If we’re considering each athlete’s entire career, Nadal wins this argument in a landslide. But which of these four athletes would you want to back, right now, in the highest-stakes setting of their respective sports? It’s hard to go against Messi, who continues to awe soccer fans around the globe with his creativity, instincts and shotmaking at an age—30—where strikers are often past their primes. Nadal, while still the man to beat on clay and the US Open champion, has shown just enough wear and tear to warrant caution. Messi is only missing a World Cup from his gilded resume, and he’ll have a chance to claim it this summer. For now, consider this quote about the Argentinean from Barcelona teammate Javier Mascherano: “[Messi] is indispensable, but the rest of us are dispensable. – No, the club is bigger than any manager, than any player... except Leo. That's the reality, and you have to accept it.”

ASHLEY NDEBELE: Rafael Nadal
The fact that Nadal's uncle Toni had the vision to coach the right-handed Nadal to play as a lefty is remarkable in itself. The Spaniard embraced Uncle Toni's idea and transformed his lefty hand into a lethal weapon. He won his first Grand Slam at Roland Garros on his first try two days after turning 19, and has won a total of 16 Majors (second most in history for a male player, behind Federer). He has won at least one Slam since 2005 (save for 2015-2016). While Kershaw, Messi, and Harden have excelled in their respective fields, Nadal's stats speak for themselves.

JOEL DRUCKER: Rafael Nadal
Nadal. Plays every minute of every game. No relief pitchers to close it out. No teammates to gather rebounds. No power plays. No in-game coaching. A tennis player is pitcher and catcher, guard and center, goalie and forward—often all on one point, in a matter of seconds. The tennis player is also the head coach and team owner.