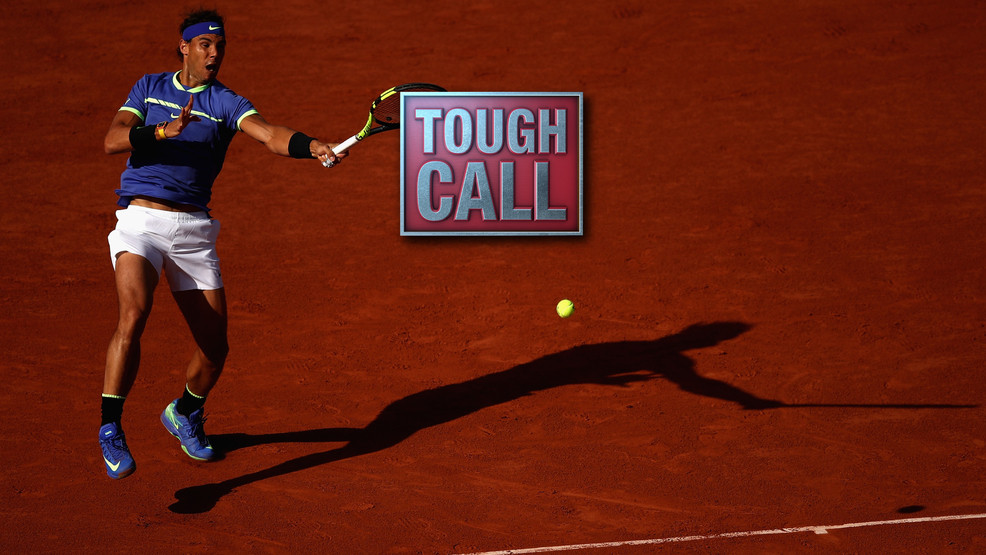 Tough Call: Who Do You Take to Win Roland Garros—Rafael Nadal or the Field?

Here is this week's edition of Tough Call. Who do you take to win Roland Garros: Rafael Nadal or the field?

~ He’s only lost two matches there: Nadal is 79-2 in his career at Roland Garros, the only two losses coming to Robin Soderling in 2009 and Novak Djokovic in 2015 (and with Soderling retired, Djokovic is the only active player to have a win over him at the event).

~ He’s playing extremely well: Nadal won his 11th career titles at both Monte Carlo and Barcelona to start the clay court season, and extended his clay court winning streak to a record 50 sets in a row before finally falling in the quarterfinals of Madrid last week.

Reasons Someone From The Rest Of The Field Will Win Roland Garros:

~ Dominic Thiem: Nadal has lost two matches on clay in the last 24 months and they’ve both been straight set losses to Thiem, at Rome last year and Madrid this year. The Austrian has also reached the semifinals of Roland Garros the last two years in a row.

~ Alexander Zverev: Though Zverev has never beaten Nadal, he’s won two Masters 1000 titles on clay in the last year (2017 Rome and 2018 Madrid - the two tournaments where Nadal lost to Thiem). He’s due for a Grand Slam breakthrough - why not in Paris?

~ 127 vs 1: While Nadal is by far the most accomplished player in the field at Roland Garros, the facts are that there will be 127 other players in the draw hungry for the title...

ASHLEY NDEBELE: Rafael Nadal
Despite his loss in Madrid last week, betting against Nadal on clay, especially at Roland Garros, is a risky business. This is a tournament he won on his first try 13 years ago, and will go into this year’s edition armed with a 79-2 career record. Beating him in the best-of-five-sets there is an overwhelming task, which has only been done once. He’s already won two tournaments on clay this season, and I don’t foresee anyone stopping him from claiming his 11th Roland Garros crown.

ED MCGROGAN: Rafael Nadal
Not all 1-in-128 chances are created equal. Not when the 1 is so far ahead of the rest of the field in best-of-five-set competition, at this particular venue, that it's a reach to pin your hopes on the other 127. Not when he just completed a run of 50 consecutive sets won on clay, and is still motivated in his 30s to extend already-unsurpassable records. Nadal just won his 11th titles at Monte Carlo and Barcelona—and at Roland Garros, dix will become onze, with the few legitimate threats to Nadal inevitably meeting their demise.

STEVE FLINK: Rafael Nadal
I am taking Nadal over the field, with no hesitation. He has won the title ten times and only two men have beaten him at Roland Garros-- Soderling in 2009 and Djokovic in 2015. Who can beat him in best of five on clay now? He will be well prepared and confident no matter what happens in Rome. Nadal towers above the field at Roland Garros and he seems destined to win it all for the eleventh time. He will be primed for this French Open and will take nothing for granted.

TIGNOR: Rafael Nadal
I'd like be a contrarian and go the other way. And in theory, picking one player over 127 others should seem risky. But when that one player has won a tournament 10 of the 13 times he's entered it, there really is no choice.

PANTIC: Rafael Nadal
There’s just no one that can stop the King of Clay on his home turf. Even though Dominic Thiem toppled him in Madrid, Paris is another story. He just piled up 50 sets in a row on dirt—itwould be outrageous to cast your hopes on anyone else.

COHEN: Rafael Nadal
As boring as it is to go with chalk, I have to say Nadal. He just lost to Thiem in Madrid, but that felt more like a fluke than a sign of things to come. It was an off day for the 10-time French Open champion, but it was one that he'd prefer to have in early May than late May.

DRUCKER: Rafael Nadal
Beating Nadal in a best-of-five set match on clay is the most daunting task in tennis. As promising as several contenders have been, it's not clear at all that any have the full range of skills to topple King Rafa.