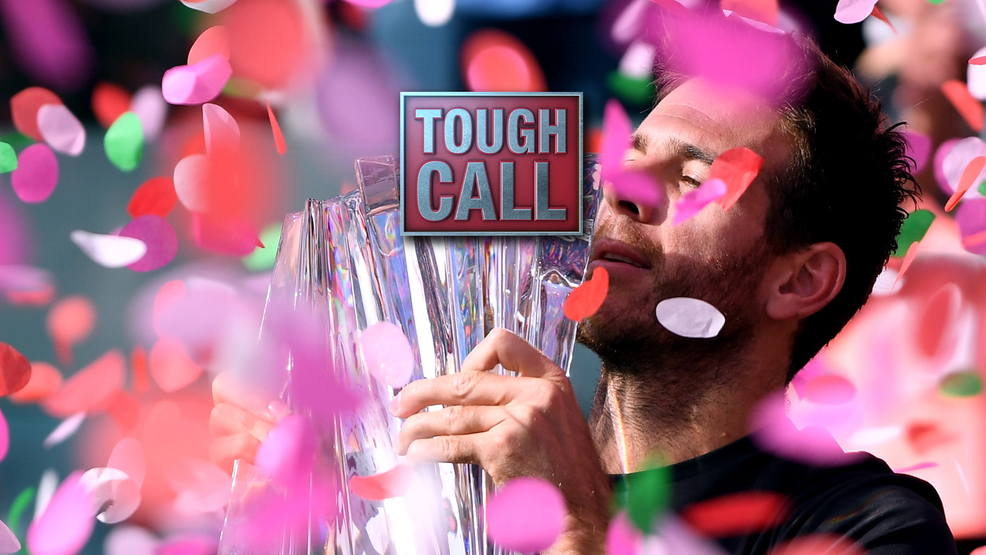 Here is this week's edition of Tough Call. Will Del Potro complete the Sunshine Double?

~ He’s got momentum: Del Potro goes into Miami on an 11-match winning streak that’s brought him back-to-back titles in Acapulco (an ATP World Tour 500-level event) and Indian Wells (a Masters 1000 event). Why would his winning momentum stop in Miami?

~ There isn’t much of a Big Four wall here: With Rafael Nadal and Andy Murray out injured, del Potro only has Roger Federer and Novak Djokovic in his way here - and he wouldn’t play them back to back (Djokovic would be fourth round, Federer the final).

~ He only just won his first Masters 1000 title: He won Indian Wells, but he came away from 51 Masters 1000 events before that without a title - and only three finals, too.

~ He’s much better at Indian Wells than at Miami: Del Potro’s win at Indian Wells this year wasn’t so far-fetched - before this year he had reached the quarters or better there in four of his seven previous attempts. But he’s only reached the quarters or better at Miami once in nine previous attempts (he made the semifinals in 2009, falling to Murray).

~ He has a tough draw: If he beats Robin Haase in his opening match, he could face Kei Nishikori in the third round (and Nishikori has won two of their last three meetings). He could then play Djokovic in the fourth round (Djokovic leads their head-to-head, 14-4).

ASHLEY NDEBELE: YES
It takes a lot, both physically and mentally, to pull off the Sunshine Double but I think the way Del Potro is playing right now, it’s very possible. His confidence level is high, his backhand is no longer a liability, and his forehand seems to be extra lethal. Djokovic and Nishikori are in his quarter of the draw, but he should be able to get through. With the South American crowd behind him, the Argentine will power his way past the field, though he might be emotionally exhausted after his three-set win over Federer on Sunday.

STEVE FLINK: NO
Del Potro could make a strong bid to claim the title in Miami after winning Acapulco and Indian Wells back to back. His confidence must be soaring. On paper, he is playing the kind of tennis that can take him past anyone in the draw. But I believe some mental and physical fatigue is bound to surface at some point in Florida. What Djokovic did in pulling off the Sunshine Double from 2014-2016 was astounding, and Federer realized that arduous feat last year. But even though Delpo has been blazing as of late, I believe he will not win in Miami.

JOEL DRUCKER: NO
While del Potro has demonstrated many skills over the course of his career -- exceptional persistence tops the charts – it’s been hard for him to generate sustained excellence. Still, off the heels of del Potro’s superb Indian Wells run, Miami will be fascinating; most of all should the Argentine and Novak Djokovic meet in the round of 16. There’s no question del Potro is a major contender in ’18. If he wins Miami, his stock will rise even higher. But I have a tough time seeing that happen.

ED MCGROGAN: YES
Many fans call Indian Wells the "fifth Slam," but to Argentina's del Potro, it may still be Miami. He'll have rousing support during all of his Stadium matches, will get nighttime billing (not inconsequential, given the South Florida humidity) and, most importantly, come in riding a wave of momentum after breaking through at a Masters tournament in Indian Wells. Though basketball's March Madness teaches us never to fully trust favorites, del Potro is my favorite this week, and he's earned that distinction.

NINA PANTIC: NO
That’s asking a lot from a guy who just battled through two tough weeks in Indian Wells for the biggest title of his career since 2009. While he’s clearly in great form, Federer won’t let three match points slip him by again—not to mention some younger players will be feeling infinitely fresher this week.

ZACH COHEN: NO
It's hard not to like the way that del Potro is playing right now, but I just can't imagine him winning two Masters in a row after never having won one before. It's worth noting that delpo didn't exactly run away with the title in Indian Wells. He was a bounce or two away from losing to Federer in the final, and I'd gladly take Roger if the two were to meet again in Miami. Nishikori, Djokovic, Dimitrov and Raonic also happen to be in his quarter of the draw—none of them are easy outs.

STEVE TIGNOR: NO
Djokovic and Federer may have made the Sunshine Double seem routine, but historically it has been hard to do. And it's hard to expect Del Potro, who at 29 just won his first-ever Masters 1000, to win another right away. He's still improving after his latest surgery; he's not dominant yet.